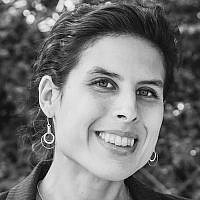 The Blogs
Sarah Fainberg
Apply for a Blog
Advertisement
Please note that the posts on The Blogs are contributed by third parties. The opinions, facts and any media content in them are presented solely by the authors, and neither The Times of Israel nor its partners assume any responsibility for them. Please contact us in case of abuse. In case of abuse,
Report this post.

France has recently revived its United Nations Security Council resolution calling for the immediate resumption of negotiations between Israel and the Palestinians with a deadline for a permanent agreement within 18 months.

France will submit this resolution after the June 30 deadline set for the nuclear negotiations with Iran (a concession to US requests) and intends to bring it to a vote in the UN General Assembly in late September. It calls for the establishment of a Palestinian state “based on the June 4, 1967 lines, with mutually agreed and equal land swaps” and positions Israel’s security requirements “at the center of the peace talks.” If no agreement is reached in the allotted time, France will unilaterally recognize the Palestinian state.

Later in June and ahead of the June 30 deadline, French FM Laurent Fabius plans to travel to Egypt, the Palestinian Authority, and Israel to convince all sides to accept the French UN Security Council resolution.

France’s diplomatic offensive started in late 2014 when both houses of the French parliament called on their government to recognize Palestinian statehood in a non-binding vote. Soon after, Paris voted for the Jordanian-Palestinian statehood bid at the UN Security Council even though it considered it as “non-balanced with regards to Israel’s legitimate security concerns” (France supported it counting on a US veto).

No doubt France’s pro-Palestinian policy stems from its historical pro-Arab orientation and is in-line with public opinion, especially in the aftermath of the “Protective Edge” operation.

Along with other EU members and Russia, Paris still frames the resolution of the Israel-Palestinian conflict as key to containing the Middle East turmoil, a linkage particularly relevant with the heightened security concerns related to returning jihadists (by latest French official estimates 1704 French citizens are currently serving the Islamic State in Syria and Iraq).

France’s official position for the short 18-month deadline is the erosion of the two-state solution on the ground and the deterioration of the situation in Gaza, Judea and Samaria, and Jerusalem. Yet, it also desires to complete the negotiations before the end of President Hollande’s term in 2017. Electoral calculations come into play as the Muslim vote was a swing vote in the May 6, 2012 elections which brought the socialist candidate to power (93 percent of French Muslims voted for Hollande).

The French bid is further bolstered by the diplomatic tensions between Netanyahu’s new government and the Obama Administration. In an interview with Israeli journalist Ilana Dayan aired on Channel 2 this week, Obama hinted at the possibility that this time around the U.S. may withhold its veto on the French initiative at the UN.

Whether the US will put its veto or not in September, Obama’s suggestion is a crystal-clear message to Israel that the US is ready to cross a red line at the UN, a message that is particularly resonant in the wake of the final rounds of talks of the P5+1.

France’s support for the Palestinian diplomatic initiatives at the UN and elsewhere deepens a lingering (although discreet) tension between Paris and Jerusalem. This growing frustration on both sides is already affecting French-Israeli strategic dialogue on key issues of the Iranian nuclear program and the future of Syria, for which France has held a closer position to Israel than the Obama Administration.

Tragically, Israel fell asleep when the Palestinians jump-started their diplomatic Intifada at the UN and other international fora. Truth be said, Israeli hasbarah failed and Israelis need to develop a comprehensive and radically new counter-strategy.

In parallel, the US Congress should deploy every effort possible to block the French initiative from the start:

(1) Seen from Jerusalem, it is biased and counter-productive as it lifts pressures from the Palestinians and bypasses Israel as a core party of the negotiations. Israelis were not consulted for the wording of the draft while the Palestinians, the Arab states, and several members of the Security Council were.

(2) There is a considerable difference between forcing a resolution and encouraging a dialogue. While the latter is desired and essential, the former is not.

(3) A French proposal is redundant with the American parameters based upon Secretary of State Kerry’s document summary of US insights from last year’s negotiations.

(4) In the words of former Israeli senior negotiator Gilead Sher, achieving a two-state solution requires replacing the old paradigm that gives exclusivity to direct negotiations for reaching an agreement of two states, with a new paradigm that allows all stakeholders – Israelis, Palestinians, the US and the international community – to take independent steps that will advance a reality of two States.

About the Author
Dr. Sarah Fainberg is a Research Fellow at the Institute for National Security Studies, INSS in Tel Aviv and a Lecturer at the Center for European Studies at IDC, Herzliya.
Related Topics
Related Posts
Comments