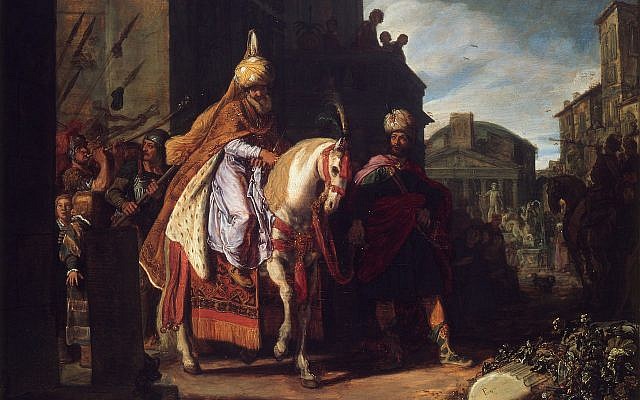 Rabbi Herzl Hefter’s Purim and the birth of the interpretive tradition starts off strong but then takes a turn southward, in which the halachic process and even our very relationship with God are sorely misrepresented. I feel an obligation to set the record straight.

Rabbi Hefter posits that subsequent to the period of open miracles, which ended prior to the events of Purim, the Jewish people’s encounter with God is to be found in the interpretive process. This itself is largely true – that in our times, the Presence of God can be experienced through Torah study:

Rav Chiya bar Ami stated in the name of Ula, ‘Since the destruction of the Temple, the Holy One, blessed is He, only has in His world the four amos (cubits) of Halacha.’ (Talmud – Berachos 8a)

The rendezvous of the Jewish people with the Divine is primarily manifest through Torah study in the current period.

Rabbi Hefter, however, then parts ways with tradition and suggests that Torah interpretation is somehow subjectively created by people and is a product of their independent will and disposition, rather than being part of the Torah’s own methodology and heritage as passed down through the ages, from the Sages of the Talmud through this day. Rabbi Hefter writes:

The mode of interpretation is based upon two principles which resonate for us. Along with the hiddenness of God a heightened awareness of human autonomy and empowerment emerges. This is coupled (in the good scenario) with a deep sense of sacred responsibility and humility. Interpretation begins with the self… it is an interpretive process in which we bring ourselves (our conceptions, sensibilities and even our biases) to the holy texts we interpret. Our human qualities are the filters through which we perceive the divine revelation.

The truth is that Torah interpretation began way before the era of Mordechai and Esther – it goes back to Moses at Sinai, as explicated in numerous Talmudic texts and as elaborated upon by Maimonides in his introduction to both his Peirush Ha-Mishnayos (Commentary on the Mishnah) and in his Yad Ha-Chazakah halachic code. The Thirteen Principles of Interpretation as well as the midrashic tradition precede the Purim epoch by a millennium, and they, along with the abstract and conceptual method of Torah interpretation, comprise the base and framework of Torah study and jurisprudence through this very day. These modes of interpretation and elucidation were not fabricated by people, reflective of their inherent biases, autonomy and empowerment (to use Rabbi Hefter’s terms), nor are they responses to the Exilic, post-miracle state of affairs. Rather, they are part and parcel of the Torah itself and are an objective logos that is beyond the tainted and pragmatic realm of most people. To quote Rav Soloveitchik, from his famous discourse about Korach and subjective Torah interpretation:

The consequence of such a democratic philosophy is obvious. What Korach wanted, and what many want even now – and I’m not only speaking of dissident groups, I’m speaking of the Orthodox community – whether they speak it clearly or they use political terms and dubious language to cover it up, is that the instrument of the Torah be commonsensical for the everyday empirical intelligence, not the esoteric conceptual ideal logos, which can only be obtained through painstaking study and hard training…

The Oral Law (Halacha) has its own epistemological approach, which can be understood only by a lamdan (advanced Torah scholar) who has mastered its methodology and its abundant material. Just as mathematics is more than a group of equations, and physics is more than a collection of natural laws, so, too, the Halacha is more than a compilation of religious laws. It has its own logos and method of thinking and is an autonomous self-integrated system. The Halacha need not make common sense any more than mathematics and scientific conceptualized systems need to accommodate themselves to common sense. (1973 lecture at Rabbinical Council of America convention; The Rav: Thinking Aloud – Sefer Bamidbar, pp. 127-148. And please also see here.)

Torah interpretation is no more the product of human bias, autonomy and empowerment than are mathematical equations expressions of the feelings and mood of the mathematician.

Rabbi Hefter alleges that the Hand of God in history and in our lives, as taught by the Purim narrative, is basically something we fabricate and is something that we cannot be certain of:

Rather than founding our faith on exterior phenomena such as miraculous history or the beauty and order found in the universe, we can begin with our enhanced sense of ourselves as the anchor of our faith in God. It becomes up to us to invest ultimate meaning into our lives by accessing ourselves when it comes to interpreting reality… It is unfortunate that as a consequence of our insecurities and feeling of being embattled, much of religious society has regressed to the pre-Purim authority based model which longs for Certainty; this is insufficient for our contemporary reality.

Even the miracle of Purim is discounted by Rabbi Hefter as an objective act of God, but is instead something that the Jewish People imposed upon (“inserted into”) the narrative:

The story unfolds over 10 years and can easily be read as a random chain of events sprinkled with curious coincidences. Meaning is inserted into the story through human interpretation – attributing developments to Providence.

Heaven forbid. We see the Hand of God in the stunningly complex and purposeful mechanisms of nature, and in the momentous and miraculous events that have been unfolding in the Land of Israel these past many decades. We encounter God through the Torah and through those who teach it according to its tradition. We hold fast to our faith as preserved and presented to us throughout the ages, from Abraham and Sarah through the contemporary period. Despite living in a postmodern world of chaos and confusion, the Jew is charged to find God and to serve Him with conviction. Maimonides (Laws of Foundations of the Torah 1:1) formulates the commandment of belief in God  in terms of “knowing” – belief must be with conviction that is tantamount to factual knowledge.

I have previously challenged Rabbi Hefter’s approach to Torah – an approach which Rabbi Hefter himself has admitted parts ways with that of his former teacher, Rav Soloveitchik. I must now again challenge Rabbi Hefter, for his new theses undermine the miraculous nature of Purim, the integrity of Torah interpretation, and our very commitment to God.