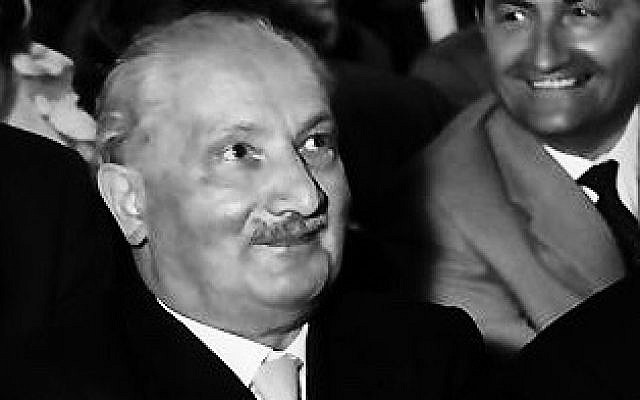 Elliot R. Wolfson, Ph.D. in philosophy from Brandeis University, where he trained under the supervision of Alexander Altmann and  leading scholarly interpreter of the late Rabbi Menachem Mendel Schneerson, of the Lubavitch Hasidic dynasty (The Duplicity of Philosophy’s Shadow: Heidegger, Nazism, and the Jewish Other (Columbia University Press, 2018), Heidegger and Kabbalah: Hidden Gnosis and the Path of Poiesis (Indiana University Press, 2019), The Philosophical Pathos of Susan Taubes: Between Nihilism and Hope (Stanford University Press, 2023)) will join The Ashkenazium first Symposium featuring Michael Chighel and Peter Trawny, from January 30th to February 2nd 2023, in Budapest.

Could you tell us first how you encountered the philosophy of Martin Heidegger ?

Elliot R. Wolfson: I first encountered the thought of Heidegger when I studied philosophy as an undergraduate in Queens College of the City University of New York. I had the opportunity to read different works of Heidegger with several professors including Edith Wyshcogrod, Derek Taylor, and Henry Wolz.

What are the connections between Heidegger and the Jewish tradition ?

Elliot R. Wolfson: I accept the view of Allen Scult that there is a phenomenological resemblance of Judaism as a way of life, grounded in the interpretative relation to a sacred text, and Heidegger’s view of philosophical practice as a reading of the founding texts of western philosophy. I, too, have noted a strong affinity between Heidegger’s way of reading philosophical texts and the midrashic method of the rabbis. And, as I have also emphasized, there is shared understanding of the temporal underpinning of the hermeneutical act, that is, reading a text is always a retrieval of a past that is yet to be, which is to say, the text is new in each moment, and thus the reader is rewriting the very text that he or she is interpreting.

As I put it in my Heidegger and Kabbalah, p. 45: “The dual deportment of tradition as malleable and durable—malleable in its durability and durable in its malleability—rests on the assumption that each moment instantiates the compresence of the recollection of the past, the actuality of the present, and the anticipation of the future. What is actual about the moment is the inversion of this rectilinearity to the extent that it promotes the memory of what will be and the expectancy of what was. Accordingly, the mandate to remember, which legitimately can be called a central pillar of Jewish ritual and self-understanding, comprises not the nostalgic reclamation of a past sealed in its factical obstinacy, but an auspicious proclamation of a future foreseen in its evental unforseeability.”

Interestingly, the affinity between Heidegger and Jewish thought on this point was already noted by my teacher Alexander Altmann, who proposed in the essay “Was ist jüdische Theologie?” (1933) that the existential moments, adduced by Heidegger, of “heritage” (Erbe) and “destiny” (Schicksal) could prove to be decisive for an understanding of Jewish existence.

Along these lines, but in a formulation unique to my way of thinking, I have underscored the affinity between the rabbinic hermeneutics and understanding of time and what we can elicit from Heidegger.

The position articulated by Heidegger can well serve as an elucidation of the philosophical underpinnings of the midrashic proclivity to unearth meaning homiletically from the text rather than by appeal to an independent conceptual system, an approach that has informed Jewish thought for millennia and is clearly what inspired the kabbalistic sensibility as well.

More importantly, in my own work, I have focused on the correspondences between Heidegger and the kabbalah, especially noting affinities with respect to the following three themes: (1) the depiction of truth as the unconcealedness of the concealment of concealment; (2) the construal of language as the house of being with which all being are disclosed in the nothingness of their being; and (3) the understanding of the origin of time-space arising from an inceptual act that is, concomitantly, a constriction and an expansion, a withholding of the boundless ground that results in the self-extending delineation of boundary.

Was the reading of Marlene Zarader helpful for that work ?

Elliot R. Wolfson: Although I had been studying Heidegger for many years, and had already begun to formulate the affinities between his thinking and Jewish thought, I did find Zarader’s book, which appeared in 1990, helpful and provocative. I was impressed by her highlighting the manner in which the Hebraic heritage influenced Heidegger’s thought, principally in his appropriation of biblical faith through the medium of Christianity, which together with Greek thought, comprise the foundations of occidental culture. The very experience of being and language that Heidegger sought to retrieve from the pre-Socratic thinkers as an alternative to what was forgotten in the history of Western metaphysics can be traced to what has been more overtly expressed in Jewish sources. And yet, as Zarader also contends, following Ricoeur, Heidegger occludes the Hebraic component of his thought “to the point of leaving something like a blank space in his text.” Zarader’s own effort was to fill the blank space by making explicit the Hebraic dimension of Christianity that was obfuscated or perhaps consciously repressed by Heidegger with his alternate narrative of a Heilsgeschichte that revolves linguistically and historically about the poles of ancient Greece and modern Germany. Just as Heidegger spoke of the oblivion of being (Seinsvergessenheit) as the obliviousness to the difference between being and beings, so Zarader identifies Judaism as what is left unthought at the heart of his thinking. In line with Heidegger’s hermeneutic, the more pronounced the concealment, the more profound the disclosure, the more resonant the silence, the more poignant the bearing witness. Particularly relevant to my own thinking is Zarader’s comparison of Heidegger’s conception of nothingness and the domain of being’s withdrawal to kabbalistic speculation on ṣimṣum, the contraction of infinity to create the vacuum within the plenum, the space wherein, paradoxically, what is ostensibly other than that which has no other can come to be, a subject that I develop at great length in chapter 4 of Heidegger and Kabbalah.

Did you read the last translations of the Black Notebooks ?

Elliot R. Wolfson: Yes, I have, and I engaged these texts extensively in my book The Duplicity of Philosophy’s Shadow: Heidegger, Nazism, and the Jewish Other.

Isn’t there still some covered antisemitism, justifying the idea that Jews aren’t “humans” or at least are “worldless” and conditioned to “traffic” and “world criminality” ?

Elliot R. Wolfson: Indeed, Heidegger is guilty of advocating and transmitting several antisemitic tropes. Again, I have discussed these texts in my book. I do not pardon Heidegger but I also do not accept the view that his antisemitism colored all of his thinking. And in the very notebooks that demonstrate his antisemitic proclivities, we find criticisms of what the Nazis were doing. As I have argued, Heidegger never disavowed the ideological reasons that led him to affirm Hitler and Nazi ideology. namely, the supremacy of the German people, the German language, and the German land. The triangulation of these three elements continued to shape his thinking.

Is the kabbalah helpful to understand Heidegger’s ideas ?

Elliot R. Wolfson: It has been in my case, and I refer the reader to my Heidegger and Kabbalah where I discuss this topic in great detail and depth.

Have you already met Peter Trawny ?

Elliot R. Wolfson: I have never met him except in a Zoom symposium. I have also had intermittent email exchanges and I look forward to meeting him in person. I have benefited from his scholarship.

What are you expecting from the conference in Budapest ?

Elliot R. Wolfson: I am excited to participate in this conference and I expect there will be some agreement amongst the participants but also some disagreement, which is always healthy for a genuine intellectual exchange.