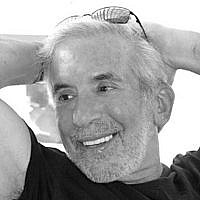 The Blogs
Michael Tobin
Apply for a Blog
Please note that the posts on The Blogs are contributed by third parties. The opinions, facts and any media content in them are presented solely by the authors, and neither The Times of Israel nor its partners assume any responsibility for them. Please contact us in case of abuse. In case of abuse,
Report this post.

This is not a letter I particularly want to write, but it’s one that needs to be written.  I’ll leave it up to Imma to write one if she’s so inclined.

You guys know all too well that I don’t think, feel, or act old. Yet, a few of you (you know who) feel compelled to remind me that I’m not a youngster. “Why are you training with so much weight? Why not just hire a porter? What are you trying to prove? Almost no one your age can trek to the Everest Base Camp so why make it harder for yourself?”

My answer to all of you is very simple: Because I can, and besides, what does age have to do with it? I know you care deeply, and you worry even more, but I’m not here to take responsibility for your worries, especially if it means not doing something I’m capable of doing just because you’re scared.

What you need to understand is that your father knows his strengths and limitations far better than any of you. I can already see your heads shaking and the words, “You push yourself too hard” forming on your lips. So, let me remind you of a very simple fact: I’ve been “pushing” myself hard for years without injury, emotional trauma, or rage at the “unfairness” of Age’s diminishing strengths.

Isn’t it possible that I might just know what I’m doing? If so, should I do less than I’m capable of because you think it’s too much? If I lived under the illusion that I had the physical capabilities I had when I was a 60-year-old youngster, believe me, I’d be spending most of my days under the care of an orthopedic surgeon instead of slowly climbing higher and higher.

So let this be an introduction to a broader discussion on the “parenting” responsibilities of adult children toward their aging parents, or more particularly and graphically, how I want you to take care of me when I can’t do things like wipe my tushy, bath myself, pee in the direction of the toilet or not pee at all, remember the names of my grandchildren, remember your names, remember your mother’s name, climb the stairs to our bedroom, learn something new, think about future goals, move pain free, dress myself, or feed myself, just to name of a few of the unpleasant possibilities of the aging process.

Of course, my wish and expectation are that none of the above will happen, but rather, to quote Dylan Thomas, I’ll either “burn and rave at close of day,” or I’ll at least drift away at a ripe old age in my own bed, next to your mother, after an active day of writing, exercising, hanging out with you guys, the grandchildren, and, hopefully by then, great-grandchildren.  Since I made a promise to myself that I’d retire at 100, I expect the year I say goodbye will be +/- 2050. I want to stay around for driverless cars, time travel, Tom Brady’s retirement, my first novel, a gold medal and numerous age-adjusted world records for the 1500-meter race, watching you all turn gray, and seeing your children and your grandchildren (my great grandchildren) blossom into the wonderful adults I expect they’ll all become.

But let’s forget about all the good things that I expect will happen and let’s be grownups and follow the advice of Andy Grove, the Founder of Intel and a Holocaust survivor, who said, “Only the paranoid survive.” In other words, let’s talk worst case scenario. (See my long list above.)

I know that you guys will “fight” with one another over who we’ll have the “privilege” (your words) to open their homes to us when we can’t take care of ourselves anymore. You know me very well and you know that, unlike your mother, I’m slow to tears and too slow to gratitude, but when you told us that there’s not a chance that any of you would let us spend our waning years in an old age home, I was crying and overwhelmed with gratitude.

It’s a rule of nature that a young child doesn’t tell his parents how to raise him. Certainly, it’s not the case with non-human mammals where parenting is hardcoded and instinctive. Even with us human mammals, parenting is top-down and non-consensual, especially when it comes to raising infants. We don’t canvas a newborn about whether she wishes to be nursed, fed, or diapered.

But when it comes to adult children “parenting” a parent, it’s all about consensus, choice, dignity, and an all-out effort to respect your parent’s diminishing capacity for autonomy. In other words, don’t do what your mother and I did with my father and her mother.

In the last month of your grandfather’s life, when we all knew that this was it, he only wanted to eat lamb chops and smoke cigarettes. I nixed both on the grounds that he needed to eat more than just lamb chops for breakfast, lunch, and dinner, and, of course, smoking’s a no-brainer.

I was wrong — totally. I decided for him. I shouldn’t have, and I don’t want you to. What difference would it have made if he smoked? He already had one and a half feet through death’s doorway and granted, it would have taken a lot of adorable lambs to meet his voracious appetite for chops, but it certainly wouldn’t have killed him. More importantly, it’s what he wanted, and he would have been happy.

Imma made the same mistake with her mother. Grandmama wanted her last meals to be ice cream, more ice cream, and nothing other than ice cream. Under doctors’ orders, she and her sisters forced her to eat “healthy” food instead of respecting her desire to leave this world on her terms. Please don’t let the medical profession’s fear of death override our wishes.

Excuse me for saying this, but never infantilize us, no matter how much we have deteriorated. Respect our dignity, our desire for even the last shred of autonomy.  Don’t ever talk to us as if we’re children, like the way the staff of nursing homes addresses the old folks with terms like “honey,” “dear,” and “sweetie.”

Never think you know better than us about what we need. Ask, never assume. You’ll be surprised to discover how much self-awareness we’ll still have buried in these old bones. I can say a lot more, but you’re all smart and I know you got the picture. Just follow this rule of thumb: treat us in the way that you know we would want to be treated, and always, always veer on the side of autonomy rather than dependency.

In the end, I hope that none of this will be necessary, because, if it’s up to me, I’m leaving the world shouting Dylan Thomas’ words:

Do not go gentle into that good night,
Old age should burn and rave at close of day;
Rage, rage against the dying of the light.

Though wise men at their end know dark is right,
Because their words had forked no lightning they
Do not go gentle into that good night.

Good men, the last wave by, crying how bright
Their frail deeds might have danced in a green bay,
Rage, rage against the dying of the light.

Wild men who caught and sang the sun in flight,
And learn, too late, they grieved it on its way,
Do not go gentle into that good night.

Grave men, near death, who see with blinding sight
Blind eyes could blaze like meteors and be gay,
Rage, rage against the dying of the light.

And you, my father, there on the sad height,
Curse, bless, me now with your fierce tears, I pray.
Do not go gentle into that good night.

Rage, rage against the dying of the light.

About the Author
Dr. Michael Tobin has been a clinical psychologist since Nixon resigned, and an entrepreneur since 1971 when, a month following his discharge from the army, he launched a health food truck on the UConn campus. Some of his ventures have been uber-successful and others not-so-much, but that's why he coined the tagline, "Experience is Everything" for his newest venture, Gurfein & Tobin, a lifestyle brand for Premiums. Want to know what Premium is and if you qualify? Find out here: http://gurfeintobin.com/premium-content/
Related Topics
Related Posts
Comments