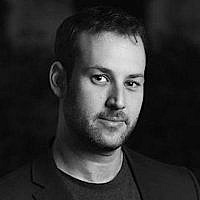 The Blogs
Elhanan Miller
Apply for a Blog
Please note that the posts on The Blogs are contributed by third parties. The opinions, facts and any media content in them are presented solely by the authors, and neither The Times of Israel nor its partners assume any responsibility for them. Please contact us in case of abuse. In case of abuse,
Report this post.

Just hours after the declaration of Israel’s independence in Tel Aviv, a shot is fired in a distant village in the Persian Gulf. The townspeople: Muslims, Christians and Jews, rush to the scene of the crime to find a man lying on the ground, dead. His black-striped tallit is discarded by his head. The camera zooms in to capture the Star of David necklace around his neck. Cut to the credits.

The closing scene of episode 1 of Umm Haroun, the new controversial Ramadan TV drama, is a cliffhanger rarely seen on Arab screens. The series deals with an elderly Jewish woman trying to navigate the social disturbances in her fragile community caused by the eruption of the Arab-Israeli conflict.

Ramadan is a time in the Arab calendar when new television productions reveal the political and social zeitgeist. A Saudi production starring Kuwaiti actors and filmed in the United Arab Emirates, Umm Haroun is widely seen as reflecting the recent rapprochement between Israel and Arab Gulf states, particularly Saudi Arabia.

Though badly acted and full of antisemitic stereotypes (“I wish you were as stingy with your words as you are with your money,” the rabbi’s wife tells him in a fit of anger), Umm Haroun goes further than any Arab drama in reflecting the real dilemmas of Middle Eastern Jews caught up in the struggle between Zionism and the Arab cause. When that fatal shot is fired at the end of episode 1, the community rabbi and his congregants are engaged in a heated debate on how to respond to Israel’s inception. “What’s wrong with you? Why aren’t you happy?” Ezra, one of the congregants, asks his fellows. “Finally, a land to call our own after so many years of exile!”

“But they will expel us following this partition plan!” answers another.

“We have no other land but this one,” intercedes the rabbi, Daoud. “This is where we were born and raised!”

My fascination with the delicate issue of Jewish-Arab relations is tied to an online project I started almost three years ago. Titled “People of the Book,” I strive to educate Arab audiences about Jewish practice and history through short videos, both animated and filmed, disseminated on social media.

For my educational purposes, Umm Haroun is a treasure trove. In only the first three episodes, viewers are exposed to the Jewish rituals of kissing the mezuzah, observing the Sabbath, wearing a tallit, and tearing one’s garments as a sign of mourning. With Jewish communities now extinct from virtually the entire Arab world, these customs seem strange and mysterious; curious viewers have no Jewish neighbors to turn to as a source of information. For them, I recently released a short video explaining the Jewish elements in the series while eschewing the sensitive political ones.

Reactions to the series on my YouTube and Facebook pages have been fascinating. Some accused the series of whitewashing the Israeli occupation by focusing on the mistreatment of Jews in their native countries.

“Why is there no series in Israel dealing with the Islamic religion?” asked one commentator. “They continuously attack us and depict Islam as a religion of terrorism and we honor the Jews and make series about their history.”

“We have no problem coexisting with Jews, with whom we’re united through our father Abraham,” wrote another. “But the Zionist occupiers came from across the seas and occupied Palestine, killing and expelling its inhabitants.”

A number of viewers said the series exposed them to unknown Jewish practices for the first time. “Is the Jewish place of worship called ma’bad or midrash?” asked one viewer, referring to two different words used in the series to discuss Jewish institutions. “What is that piece of wood the rabbi kisses when entering the house? Does such a thing exist and what is it called?”

But the series also gave voice to intra-Arab tensions: A number of Iraqis accused Kuwait of cultural appropriation, claiming there was never a significant Jewish community in the tiny Gulf State. The real historic background for the story, they argued, took place in the southern Iraqi city of Basra with a famous Jewish woman named Um Shaul. Another version speaks of a Bahraini Jew named Um John.

“Jewish Iraqi families were greatly mistreated,” wrote a female viewer. “They were forced to leave Iraq and their assets were confiscated by the government. This is an injustice, and God does not tolerate injustice toward any of his servants, irrespective of their religious affiliation.”

Umm Haroun could never feature on TV screens in the West. Its Jews are too stereotypical, the dialogues too forced and didactic. But for those aspiring to bridge the gap between Arab and Jewish civilizations, even baby steps are welcome.

About the Author
Elhanan Miller is a journalist and researcher specializing in the Arab world. His online initiative People of the Book is aimed at bringing Jews and Muslims closer together through viral videos shared on social media.
Related Topics
Related Posts
Comments