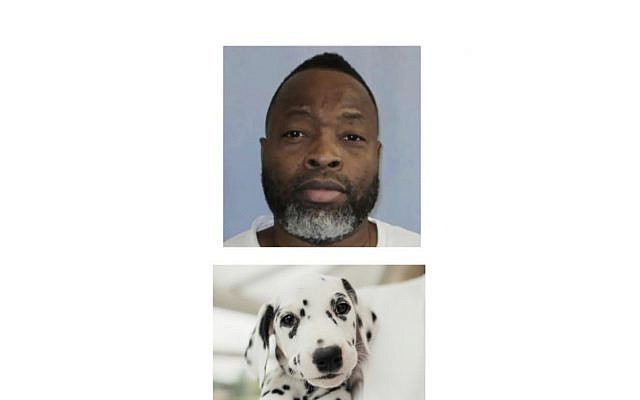 Image Caption: Above: Joe Nathan James, Jr., picture on file with the Alabama Department of Corrections. Joe James’ July 28, 2022 execution in Alabama took more than three hours to complete and is considered the longest lethal injection in American history. Below: A stock picture of a dog. (https://www.thekennelclub.org.uk/getting-a-dog/buying-a-dog/)

Who has more inherent rights: a human being or an animal?

No matter how we answer this question, let us take a moment to consider this from the perspective of the human death penalty.

First, a disclaimer: we, the members of  “L’chaim! Jews Against the Death Penalty,” stand united against capital punishment in EVERY SINGLE case – for both the innocent AND the guilty. We are aligned with Elie Wiesel, Martin Buber and countless others who realized after the Holocaust that a state with the power to murder its own citizens has NO PLACE in the civilized world. This applies to the United Stares, whether via its Nazi T4 legacy that is “lethal injection,” the various American gas chambers – including one that uses Zyklon B – or ANY OTHER means. We agree that capital punishment is a racist, human rights BARBARISM that makes the United States a laughingstock as we deign to advocate for the advancement of human civilization.

In addition to my leadership role at L’chaim, I serve in my day job as a multifaith chaplain at an American research hospital. There, I have the tremendous responsibility of being the required non-scientific member on an Animal Care and Use Committee. As part of this esteemed group, I have learned more than I ever imagined about the prodigious ethical standards that guide the meticulous loving care that our researchers provide to the animals with whom they come into contact. This includes ensuring maximum transparency in every step of research and the minimization of any kind of suffering as much as possible through rigorous inspection and oversight.

Just recently, I participated in the Annual Animal Celebration and Reflection Ceremony that we hold to honor all of the animals with whom we have worked to develop animal and human life-saving treatments for cancer, COVID-19 and countless other medical conditions. Here is how I concluded that event:

“I would like to close our ceremony with the traditional blowing of the shofar/ ram’s horn that is used in my own Jewish tradition to awaken our spirits and open our eyes as we head into the new year, which begins next week. Recall that a human life – that of Abraham’s son Isaac – was saved when a ram was sacrificed in his place. That ram was caught in a thicket – by its horn. In this vein, the ram’s horn symbolizes the renewed hope for life for us all. May we take a moment as we hear this blast to honor every being that has entered our lives this past year here at our hospital. We offer this call with profound gratitude, humility and hope that we will continue to learn and grow in our partnership with all living creatures with whom we come into contact…Tekiah G’dolah/A Great Blast: L’chaim – To Life!”

Now, juxtapose this level of ethical loving care with what we at “L’chaim! Jews Against the Death Penalty” continue to witness as state and federal jurisdictions in our nation regularly put to death defenseless human beings. (Let us put aside for a moment – if possible –  the inherent insanity of the practice of killing people to show that killing people is wrong – a notion that even Mr. Rogers realized was teaching the wrong lesson to our children.) To illustrate this juxtaposition, we could pull from any number of a growing litany of botched American executions, as the Death Penalty Information Center has collected here.  For our purposes, however, let us simply consider this year:

Let us consider the bloodbath that took place in Arizona just this past spring when Clarence Dixon was cut open in the groin.

Let us consider the record-breaking hidden-from-view 3+hour-long execution of Joe Nathan James, Jr. in Alabama this past summer.

Let us consider how we started the fall 2022 season with the torturous botched execution attempt of Alan Miller in the same state, which had to call off its efforts to kill him before the expiration of his execution warrant at the midnight hour.

It is stupefying to try to make sense of this divergent level of care between animals and prisoners in our society. Granted, there are indeed many horrific instances of how we often do not meet the rigorous ethical standards that our society has set for animal research. Likewise, there are also cases of human state-murders that are not considered botched, but rather are carried out “by the book” and with a true “Banality of Execution.” And yet: the fact remains that we still do indeed kill defenseless human beings, frequently in ways that seem to maximize suffering and minimize transparency. (Note the recent campaign by abolitionist organizations to “Pull Back the Curtains”.)

We certainly recognize and respect that many individuals are opposed to the very idea of animal research. Indeed, my esteemed colleague and fellow Advisory Board member on Death Penalty Action, Rabbi/Dr. Shmuly Yanklowitz, is also the founder of Shamayim: Jewish Animal Advoacy, and has written eloquently and informatively about Jewish ideas about the ethics of animal research here. Yet, regardless of how we stand on that issue, we MUST at the very least consider how our approach to animal rights informs our approach to the most basic human right of all: that of life itself.

Perhaps you agree with Oklahoma lawmaker Mike Christian’s comment about human beings on death row, when he said this: “I’ve called them [individuals on death rows] animals, and I think it’s almost being critical of the animal kingdom to call them animals because animals don’t act the way some of these monsters do, these demons.”

As for us at L’chaim, we vehemently disagree with Mr. Christian. Instead, we stand by the words of Holocaust survivors and Nobel laureate Elie Wiesel, who famously said of capital punishment: “Death is not the answer.” Prof. Wiesel also said this, which is our anthem:

“With every cell of my being and with every fiber of my memory I oppose the death penalty in all forms. I do not believe any civilized society should be at the service of death. I don’t think it’s human to become an agent of the angel of death.” Amein, Selah.

Opinions no doubt run the gamut on all the issues raised in this brief essay. For our purpose here, and for the sake of life itself, we beg of you to ask yourself: where do YOU stand on the human death penalty?