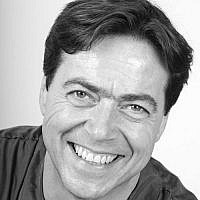 The Blogs
Edward Jacobs
Apply for a Blog
Please note that the posts on The Blogs are contributed by third parties. The opinions, facts and any media content in them are presented solely by the authors, and neither The Times of Israel nor its partners assume any responsibility for them. Please contact us in case of abuse. In case of abuse,
Report this post.

Today is Human Rights Day.  A cause for celebration as well as call for renewed commitment. 71 years ago to the day in 1948, the United Nations formally adopted the aspirational Universal Declaration of Human Rights (UDHR).  According to the UN, it is a “milestone document proclaiming the inalienable rights which everyone is inherently entitled to as a human being regardless of race, color, religion, sex, language, political or other opinion, national or social origin, property, birth or other status.”

And how’s that worked out for humanity? Did it have the desired effect on the world at that time or anytime later? What about the state of the world today? Ongoing genocides, savage terror, despotic regimes, torture, repression, modern day slavery- and in our own backyard, prejudice, racism, and inequality seemingly ascendent. The picture appears as bleak as it is tragic.  It seems that nothing has really changed, that we have learned nothing…

Born from the rubble and devastation of World War II and the “. . .disregard and contempt for human rights which has resulted in barbarous acts that has outraged the conscience of mankind”, the UDHR was meant to address the surfeit of horrors experienced by much of the world during the war. That included economic inequality and depression- also seen as a major cause of the war, as well as core civil, political and social rights.  In the UDHR it is not the state that is inviolate, but rather the individual.

Appointed by President Truman, Eleanor Roosevelt presided over a drafting committee comprised of nine “framers” each from different countries who overcame political, national and religious differences to produce an idealistic statement of values meant for all humankind. Other delegates included Hansa Mehta from India, the woman who was responsible for ensuring gender equality in the UDHR by changing the word “men” to “human beings” so that Article 1 reads: “All human beings are equal in dignity and rights”. Rene Cassin, a French jurist whose family had been murdered in the Holocaust, won the Nobel Prize for his humanitarian efforts including drafting the original language of the UDHR.  It was Cassin who likened the structure of the document to a Greek portico. Each of the elements- the columns, the pediment, the stairs- represent principles within the Declaration, an architectural unity exemplifying both rights and obligations.

Was this human rights portico merely a house of cards? A sandcastle built on the shifting shores of naive utopian idealism?

Our own founding fathers articulated similar high ideals and aspirations during the formation of our nascent democracy. Recognizing the inevitable reality that human beings often fall short and fail to live up to those ideals, mechanisms for repair were built-into the system. They too were dependent upon idealistic human agency for the work of repair.

Surprisingly, there is much to celebrate.

Humanity and human rights have progressed mightily since the end of the Great War. While Yale historian Samuel Moyn has convincingly argued that it was only in the seventies, after the civil rights movement, that the ideological climate was ripe for human rights claims to make a difference not through political vision but by transcending politics. It was then that morality, global in its potential scope, could become the aspiration of an enlightened humankind.

While all the horrors broadcast on our many little screens seem to show a different picture- we must know that poverty, hunger, illiteracy, disease, war, and violence have decreased dramatically. While much of the world is still a perilous place, we are getting better. And where we are not, the ubiquity of those very screens and cameras mean that inhumane treatment of any kind can not hide for long.

This good news should not engender complacency, but rather renewed commitment. As human malevolence is ever-present, so should we ensure that empathy, grace and compassion are also present in greater measure. The dialectical reality is that while the villains are always uncomfortably in sight, like some shapeshifting chimera they too are always evolving, deviating, mutating. That is why we must be ever vigilant, but equally hopeful, and idealistic.

This year’s theme of Human Rights Day is: “Youth Standing Up for Human Rights”. Led by the Office of the High Commissioner for Human Rights, “it is designed to encourage, galvanize, and showcase how youth all over the world stand up for rights and against racism, hate speech, bullying, discrimination, and climate change, to name a few.”

To give our youth the strength and fortitude to “stand up”, we must arm them educationally.  They must know their rights. They must be inspired and motivated to fight for those rights using all their ingenuity and savviness. They need to know that we are standing up with them and have their backs. In this way, they- and we- become upstanders, a term coined by Ambassador Samantha Power to show us the best that humanity can strive for.  An upstander is a person who sees injustice, inequality, or unfairness and stands up to do something about it.

As museum designers specializing in human rights exhibitions, we have seen that we can challenge conscious and unconscious biases, change behavior, and inspire positive action through bold educational initiatives and creative pedagogical techniques which deliver impactful lessons that inspire upstanding behavior among our audiences.

Todays imperative is to celebrate Human Rights Day by becoming ourselves Upstanders. By renewing our commitment to educate about those rights we wish for all humanity to share in.  And as is stated in the preamble of the United Nations Charter: “… to reaffirm faith in fundamental human rights, in the dignity and worth of the human person, in the equal rights of men and women and of nations large and small …”

Edward Jacobs is a partner in the museum design firm Berenbaum Jacobs Associates, specializing in the subjects of human rights and genocide.  Mr. Jacobs was the concept and exhibition designer for the recently opened Dallas Holocaust and Human Rights Museum, as well as the The Nancy & David Wolf Holocaust & Humanity Center at Cincinnati’s historic Union Terminal. He has authored ten graphic novels on Genocide, has a feature chapter in the upcoming Oxford Handbook of Positive Psychology on the Arts and Humanities.

About the Author
Edward Jacobs is Principal and co-founder of Berenbaum Jacobs Associates. Working with Berenbaum, Jacobs is involved with creation of the conceptual narrative while spearheading the firm’s Design department. Prior to founding BJA, Jacobs was a principal at the Berenbaum Group where he worked on a variety of experiential projects. At that time, Jacobs operated his own multidisciplinary, concept and design firm producing renowned projects worldwide ranging from public-space projects, spiritual environments, educational centers, memorial sites, synagogue interiors, industrial and product design, and graphic design. He is a recognized expert in the fields of communication and experiential architecture, creating unique and creative solutions for his various clients.
Related Topics
Related Posts
Comments