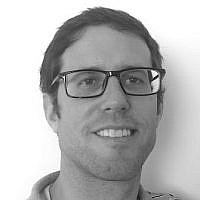 The Blogs
Noam Shapiro
Apply for a Blog
Advertisement
Please note that the posts on The Blogs are contributed by third parties. The opinions, facts and any media content in them are presented solely by the authors, and neither The Times of Israel nor its partners assume any responsibility for them. Please contact us in case of abuse. In case of abuse,
Report this post. 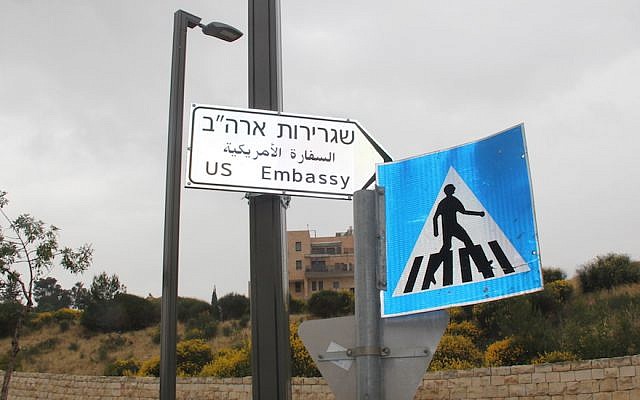 A newly hung sign pointing to the US Embassy in Jerusalem, which was inaugurated on May 14, 2018. (Ben Sales/JTA)

I’m a proud Israeli, and I don’t want to pick a team.

I am happy that the US Embassy is now in Jerusalem.
But it’s complicated — because the man behind it is a hateful buffoon who I believe damages the United States every day he is in office. And because he is behind it, most of the world will now associate this move with him. This is not good for Israel.

I am happy that the US Embassy is now in Jerusalem.
But it’s complicated — because it came without any gesture towards the Palestinians, and I worry that the United States is losing any credibility it might have had to help things evolve in this tumultuous region.

I am happy that the US Embassy is now in Jerusalem.
But it’s complicated — because it came on a day when dozens of Palestinians in Gaza were killed, which was, unfortunately, a necessary result of their attempted infiltration and stated goals of killing Israelis, but which is a sad tragedy in its own right, and the optics of the images of their deaths in contrast to the festivities in Jerusalem are just beyond awful.

I am happy that the US Embassy is now in Jerusalem.
But it’s complicated.

I know many of you may disagree with me. You think I’m a timid, hand-wringing liberal who can’t see past his hatred of Trump or move beyond an unwarranted sense of guilt vis-a-vis my Palestinian neighbors.

Others might say I’m supporting and enabling a dangerous and hateful man. You think that maybe I’m careening recklessly to the right in my one-sided assertion of Jewish claims to Jerusalem, I’m myopic in not adequately acknowledging the Palestinian narrative and suffering.

And I’m pretty sure I’m not alone.

So can we please stop turning every political issue into a binary choice? Because I know two things with certainty: I’m a proud Israeli, and things are complicated.

About the Author
Noam Shapiro lives in Efrat with his wife and four children. A rabbi and educator in America, he made aliyah in 2010 and has shifted professionally into the world of digital marketing and business development. His favorite pastime, after following Boston sports, is celebrating complexity and embracing contradictory ideas.
Related Topics
Related Posts
Comments