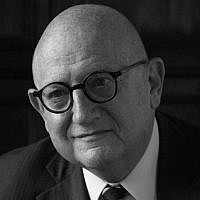 The Blogs
Ira N. Forman
Apply for a Blog
Please note that the posts on The Blogs are contributed by third parties. The opinions, facts and any media content in them are presented solely by the authors, and neither The Times of Israel nor its partners assume any responsibility for them. Please contact us in case of abuse. In case of abuse,
Report this post. 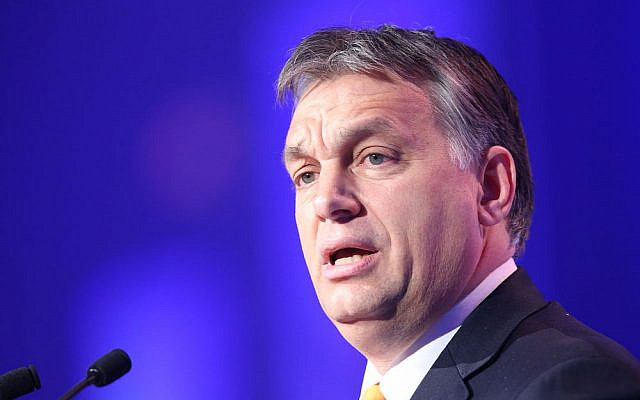 JTA — It has been a traumatic time for world Jewry. If violence in Gaza and Israel were not bad enough, the fallout from the conflict has spurred physical attacks on Jews, vandalism and antisemitic rhetoric. The antisemitism this time has not been perpetrated by neo-Nazis and white nationalists but by elements of the left and pro-Palestinian protesters.

The culprits behind antisemitism include many sets of actors. Antisemitism associated with Israel has been the recent focus. Sometimes the culprits are government-associated actors and the rhetoric is aimed not at Israel but directly at Jews. When state actors are involved, the United States, its democratic allies and even civil society have efficient tools and the responsibility to demonstrate that there is a steep price to pay for employing Jew-hatred in the 21st century.

Recent rhetoric in Hungary is an example of what must be labeled unacceptable.

One of Prime Minister Viktor Orban’s close political allies, journalist Zsolt Bayer, published a vicious rant this month denigrating, among others, the United States and President Joe Biden. The most disturbing element of Bayer’s column, however, is that at a time when Secretary of State Antony Blinken is taking a lead in decrying the recent explosion of worldwide antisemitism, Orban’s friend wrapped up his argument by using a time-honored antisemitic slur to characterize Blinken, who is Jewish.

Bayer has a long, well-deserved reputation as an anti-Roma bigot, racist and antisemite. One might ask why this journalist’s opinion is so important? It’s because Bayer’s musings provide a near reflection of Orban’s views on how to confront the U.S. and the Biden administration.

His latest hate-filled diatribe ran in the Magyar Nemzet newspaper, a loyal backer of the Orban government. Bayer is also one of the founding members of the ruling Fidesz party and is described as a close confidant of the prime minister. Moreover, in 2016, this bigoted journalist received (despite near universal criticism) one of the Hungarian state’s highest honors, the Knight’s Cross — a tribute that is presented by the president of Hungary but certainly had to be approved by Prime Minister Orban.

Orban’s own public statements are usually not as directly racist and foul-mouthed as Bayer’s, but in closing out the 2018 parliamentary election campaign he delivered an address that included a series of Bayer-like antisemitic epithets that caused a National Review columnist to declare that the “speech reads like a checklist drawn from the ‘Protocols of the Elders of Zion.’”

Bayer’s latest diatribe came amid diplomatic tensions between Hungary and the Biden administration. In recent remarks, Blinken emphasized that the U.S. hoped for a positive relationship with Hungary, but also expressed concern over the lack of press freedom and the rule of law under the Orban regime.

Peter Szijjarto, Hungary’s foreign minister, quickly dismissed Blinken’s concerns by remarking that the United States should not worry about democracy and freedom in Hungary. In another interview Szijjarto said that Hungary is open to cooperation with the United States if Biden is willing to show more respect toward the Hungarian government.

In his Magyar Nemzet column, Bayer responded to the facts about Hungary’s increasingly repressive media environment by spinning a conspiracy theory about how CNN manipulated the news to deny Donald Trump’s reelection. Bayer went on to charge the American media with covering up the supposed frailty and corruption of Biden during the 2020 campaign.

Not satisfied with disparaging the new U.S. president, Bayer ridiculed the country’s role in the world. He claimed the United States was allied with Orban’s political opposition and was planning to send “mercenaries” to Hungary to undermine Fidesz in the next election. Bayer mocked America’s “exporting of democracy” and asserted that the United States is fomenting hate against Russia so Europe would nix cheap Russian natural gas and buy America’s expensive shale gas.

For his finale, Bayer deployed one of the vilest of antisemitic tropes of the 20th century: the rootless Jew.

Bayer ridiculed the assertion that Blinken had “Hungarian roots” even though his mother’s family were Jewish Hungarians who immigrated to the United States.

Bayer rudely addressed the new secretary of state and exclaimed “you are completely a ROOTLESS Hungarian as you are a rootless American.”

Remember, Hitler maligned Jews as a “rootless international clique that incites nations against each other”; Stalin employed the “rootless cosmopolitan” charge to question the patriotism of Soviet Jews and as a prelude to begin purges against prominent Soviet Jews in the 1940s and ’50s.

The fact that Orban has not repudiated any of his compatriot’s slurs reinforces the notion that Bayer’s words are sanctioned by the prime minister.

The Bayer diatribe is troublesome — and not just because it’s another illustration of the increasing authoritarianism of the regime. This unofficial Hungarian government perspective — scorn for the U.S. and sympathy for Russia from a country that is part of NATO — comes at a time when Russian President Vladimir Putin is doing his best to undermine the solidarity of the NATO democracies as they try to discourage Moscow’s aggression.

Moreover, Budapest’s willingness to resort to barely disguised antisemitism is not only a threat to the 50,000-plus Jewish citizens of Hungary. It sends a signal to other neighboring countries that 75 years after the Holocaust, it is acceptable again to operationalize the scapegoating of Jews.

The United States and world Jewry share similar interests in confronting antisemitism in budding authoritarian regimes. There is substantial evidence that Jewish communities are more secure from antisemitism in countries where human rights, representative governments and press freedoms are cherished and protected. Moreover, leaders in the United States, France, United Kingdom and Germany have all acknowledged that antisemitism threatens not only Jews but the very institutions of representative governments.

In a world where antisemitism manifests itself in many ways, democracies must be prepared to fight all forms of the disease. One of the most effective ways is by naming and shaming regimes like Orban’s that dabble in antisemitic rhetoric and stereotypes. After that, the United States, its allies and their respective NGOs have many diplomatic and economic tools to reinforce the notion that state-sanctioned hate and authoritarianism will not be tolerated in 21st-century Europe and the Americas.

About the Author
Ira N. Forman served as the State Department’s Special Envoy to Monitor and Combat Anti-Semitism from 2013-2017. He is a former Executive Director of the National Jewish Democratic Council.
Related Topics
Related Posts
Comments