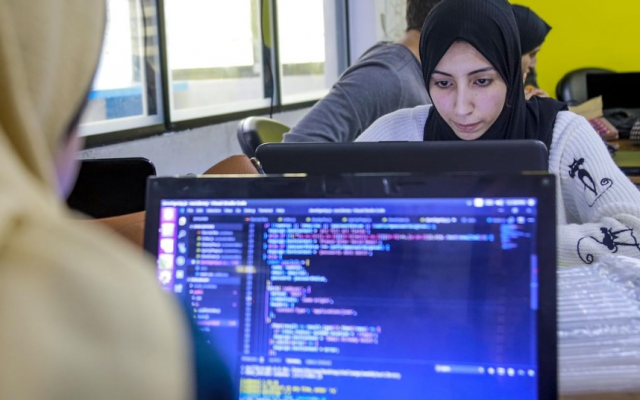 HOTHOUSES OF TECH INVESTMENT IN THE PALESTINIAN TERRITORIES

Part 4  in the Series Partnering for Palestinian Prosperity

By Jon Simmons Co-Director of i61Collective

Palestinian GDP has been shrinking since 2013 according to the World Bank’s Palestinian Economic Update, which should come as a surprise given the territory’s proximity to the nation heralded for its innovation, Israel. Foreign aid to the Palestinian Authority, which has been generous in previous years, is declining year on year.

SUPPORT HOPE INSTEAD OF HATE

In my research for this series on the theme of how to support Palestinian Businesses, it was easy to find organisations in the UK and the rest of Europe that actively condemn Israel’s geopolitical policy towards Palestinians. A common theme among them is that they aim to damage Israel’s economy, by calling for boycotts and sanctions on Israeli companies and international businesses operating in Israel. 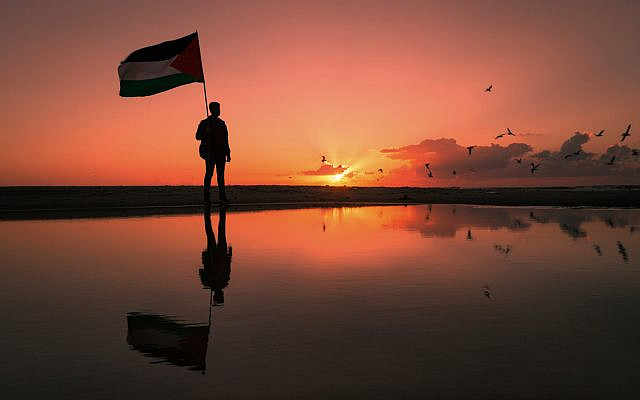 Many economists have written that this malicious attempt to damage Israel’s economic productivity is failing in its objective, as the UK and Israel’s bilateral trading relationship grows year on year. What is even more disappointing for the Western business and consumer that wants to help Palestinians is that such an effort does not help the average businesses in the West Bank or Gaza to prosper.

I found there were far less Western organisations that desire to positively contribute to the success of Palestinian entrepreneurs. This Part 4 in my series Partnering for Palestinian Prosperity brings to the centre of the conversation the Palestinian projects that are bringing about positive change.

Palestinian universities turn out about 3,000 engineering and computer science graduates every year, but the unemployment rate is very high – close to 31%. The workforce is young, skilled and available. The talent is not lacking, but the right conditions need to be created, so surely we can do more in the West to help build these conditions.

Accelerator programmes help startups in their initial stages to develop, and often provide small amounts of seed money. “While the Palestinian startup ecosystem is at its early-stage and still maturing, it has highly educated founders and one of the highest rates of female entrepreneurs” higher than that of London and New York.

On average, the West Bank and Gaza produce 19 more startups each year than they had the previous year.

The same report finds that there are 241 active startups in the Palestinian territories. This promising development has been largely due to the strong work ethic of the Palestinian people, high educational standard, and high-speed data services in the West Bank made available since January 2018. 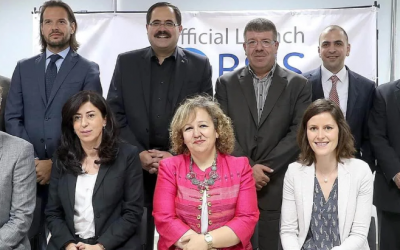 The BSIS Programme is part of the reputable Leaders Network, one of the first organizations focused on digital entrepreneurship in Ramallah. BSIS focuses on startup incubators across the West Bank and Gaza. With funding from the European Union, BSIS provides entrepreneurs with shared office space and resources, business advice, training, and coaching.

What makes BSIS unique is that they offer up to 30 business advisors for their startups, from whom they can receive international accreditation.

CEWAS, the International Centre for Water Management Services, focuses on solving environmental challenges and runs a yearly competition event in the Palestinian Territories. 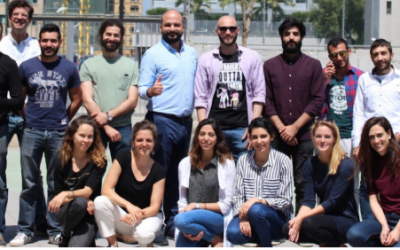 Since 2016 CEWAS have supported more than 60 social enterprise start-ups in implementing new solutions in the environmental sector. One of their companies, FlowLess, is currently developing a using AI to automatically detect leakage in water networks and provide monitoring, interpretation, and reporting of the network status, along with the ability to forecast future incidents. It is reported that water losses affect more than 33% of supplied water in the West Bank despite water scarcity.

Sadara founded by American Israeli Venture Capitalist Yadin Kauffman, is the first Israeli VC to target the Palestinian tech sector exclusively. Kaufmann’s latest initiative, the Palestinian Partnership Fund, provides grants for joint ventures between Palestinian entrepreneurs and companies. Sadara has a number of tech companies that cover a range of services to suit international buyers. One such company is Freightos, which delivers real-time market pricing and global freight management for over 5,000 companies. With backing from Cisco, the Google Foundation, the European Investment Fund and others, Sadara Ventures is making gradual inroads in the West Bank, financing six Palestinian companies so far. Their portfolio has raised over $70 million in VC funding. 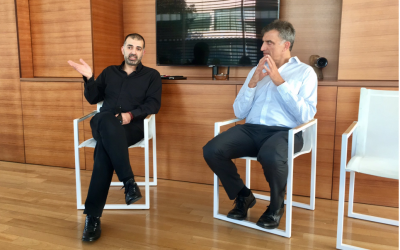 At a recent conference hosted by the US government, Kaufmann stated, “If we could succeed in doing that it would be good for the Palestinians, and make Palestine more of a real economy rather than donor-dependent.”

“For most people in the technology space, when you ask people about startups, Palestine is not on the top of the list, it’s not on the list at all. We started to think of something that for all intents and purposes was impossible to do, start a venture capital fund in a place where something like this has never been heard of. You layer on the geopolitical complexities, and you have the definition of impossible” Saed Nasher.

Gaza Sky Geeks (GSG) is Gaza’s first coworking space and is a hub for local entrepreneurs and freelancers. It is the first academy to provide an essential foundation for its students and members to develop a freelance career building websites and apps for Arab and Western businesses. With the official backing of Google Startups and Mercy Corps, Gaza Sky Geeks serves to “help Palestinians earn online through coding boot camps, freelancing training, and pre-seed startup acceleration. 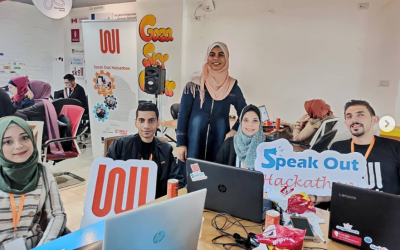 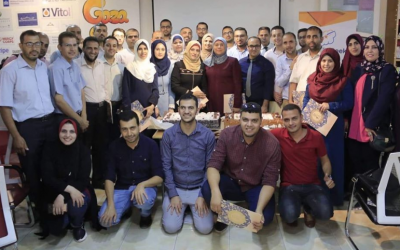 In downtown Rawabi city, Connect, a tech-oriented business centre has been established by Palestinian property billionaire and founder of Rawabi city, Bashar al-Masri. Bashar hopes he can fill the entire business centre, which includes a sleekly designed collaborative workspace and startup. In spite of burdensome Israeli bureaucracy, Bashar admits that proximity to Israel, the “startup nation”, is actually the tech hub’s biggest advantage.

COnnect hosts an array of workshops, training programs, and guest speakers for both its members and the tech ecosystem. With the aim of nourishing the minds and sharpening the skills of the Palestinian entrepreneurial scene to build capable individuals, talents and outstanding products.

Ibitkar is the first post-accelerator investor with an $11 million fund that focuses on investments in early-stage innovative ventures, especially information communication and technology companies.  Companies invested in must create positive employment opportunities in the Palestinian territories. Deal sizes range from $40k for direct and accelerator services and $100k-$800k for post acceleration services.

When interviewed for the documentary Holy Lands, Start-Up Nations, a film that investigates the technology ecosystems in The West Bank, Gaza and Israel, COO Ibtikar Fund, Ambar Amleh  said

“Ramallah has become the de facto capital for the Palestinians, so you have the incubators and accelerators and the training programmes. 80% of investors are Palestinian both within or outside of Palestine”

One hope is for Palestinian economic survival is that multinational companies with headquarters in Israel, such as Google or Intel, will open up outsourcing offices in Rawabi. Another is that Israeli companies themselves will outsource to their Palestinian neighbours. Masri noted that while Jordan and Egypt can offer cheaper human resources, they cannot create relationships with Israeli companies like Palestinians can.

Having received more than $35 billion in aid since 1993, Palestinians in the West Bank and Gaza are consistently ranked among the world’s top recipients of aid per capita. However, the Palestinian leadership is now facing an increasing number of accusations concerning their poor administration of these handouts.

From the Palestinian Businessmen and women that I have interviewed, many of whom have asked to remain anonymous for their own safety, the prevalent theme is that the enterprising Palestinian hopes not on foreign handouts, that filter through Palestinian politicians hands, but instead direct investment into organisations that train ambitious Palestinians to upskill themselves and provide their talent to conscious businesses in the West.

“We as Palestinians need to stop thinking of ourselves as victims, instead as people that despite our situation can offer solutions to the rest of the world” Saed Nasher

Surely it is time for us in the West to be more responsible with our goodwill. We need to challenge unethical redirection of funds and demand accountability, for the sake of the Palestinians that simply want to provide for themselves. Let’s reward creative ventures that are building economically viable business models.

Businesses and organisations such as Google, Intel and Mercy Corp have paved the way in actively funding and administering Palestinian incubators, accelerators and tech communities, and Palestinian Venture Capitalists are inviting others to follow.

As we in the West become more conscious of our supply chain, surely now is the time empower Palestinian business leaders to draw out a roadmap of not just of ideas, but of partnerships with investors and businesses in the West.

In the words of Palestinian Property Billionaire, Bashar Masri “We don’t have to wait for the occupation to end to start to build the Palestinian Economy, we need to get on and build now”

Sign up to i61collective.com to be the first to receive releases supporting Palestinians in their positive creative endeavours.