Back in September 2012, Israeli Prime Minister Benyamin Netanyahu elicited admiration, fear, and more than his usual share of ridicule for a theatrical performance at the UN General Assembly, in which he warned that Iran was dangerously close to assembling a nuclear weapon.

“Ladies and gentlemen, if it looks like a duck, walks like a duck, and quacks like a duck, then what is it?” he asked delegates gathered in New York. “That’s right, it’s a duck—but this duck is a nuclear duck. And it’s time the world started calling a duck a duck.”

The unfortunate analogy spawned a torrent of criticism — and at least one memorable YouTube parody featuring Daffy Duck himself.

But what if Bibi was right?

Fast-forward eight years later, and it appears that of all the potential Middle East crises confronting Joe Biden — ranging from Syria’s decade-long civil war and the Israeli-Palestinian conflict to COVID-19 and the worsening humanitarian catastrophe in Yemen — the one likely to frighten the 46th president the most is the prospect of a nuclear Iran. 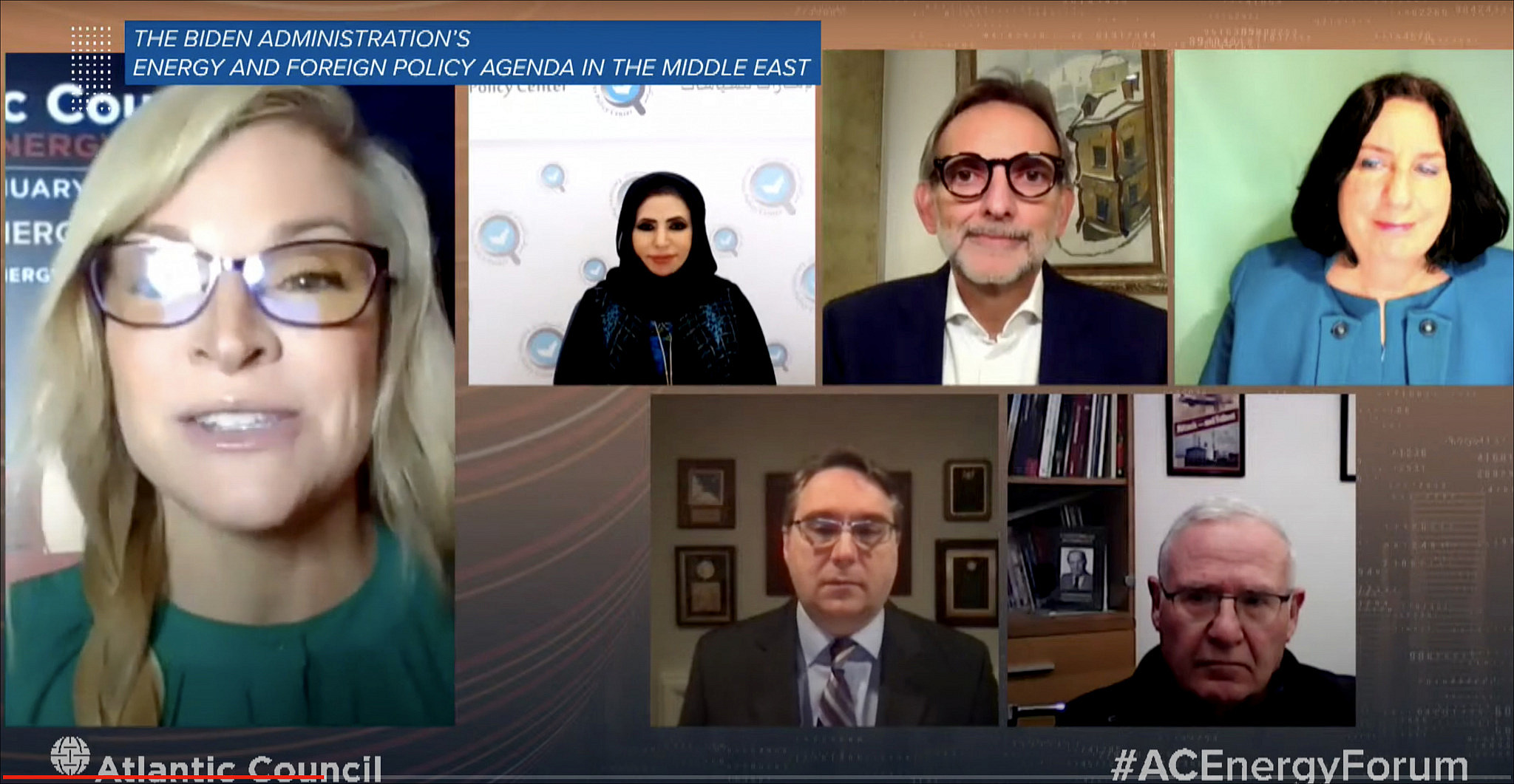 Filling the US vacuum

So say five US, Arab and Israeli experts who met last week for a virtual discussion on Jan. 20, the day of Biden’s inauguration. The panel—moderated by Kirsten Fontenrose, director of the Atlantic Council’s Scowcroft Middle East Security Initiative—formed a key part of the council’s Global Energy Forum 2021, which usually takes place in Abu Dhabi.

“Iran has been increasing its imports of enriched uranium. This demands attention immediately, and Biden will make that a critical priority of his,” said Carlos Pascual, senior vice-president for global energy at IHS Markit and former US ambassador to Mexico and Ukraine.

“Iran is trying to kick the US from the region and bring China and Russia to fill that void,” warned Ebtesam Al-Ketbi, president of the Emirates Policy Center in Abu Dhabi, . “This will be the greatest threat, [if] the US is going to lower its footprint in the region.”

Indeed, Iran has resumed enriching uranium to 20% purity at its underground Fordo facility—in what observers are calling its most significant breach yet of a 2015 deal with major world powers to end punishing economic sanctions. While enriched uranium can be used to make reactor fuel to generate electricity, it’s also a key ingredient in nuclear bombs; weapons-grade uranium is 90% purity.

A US State Department spokesperson immediately accused the Tehran government of “pursuing a campaign of nuclear extortion.” 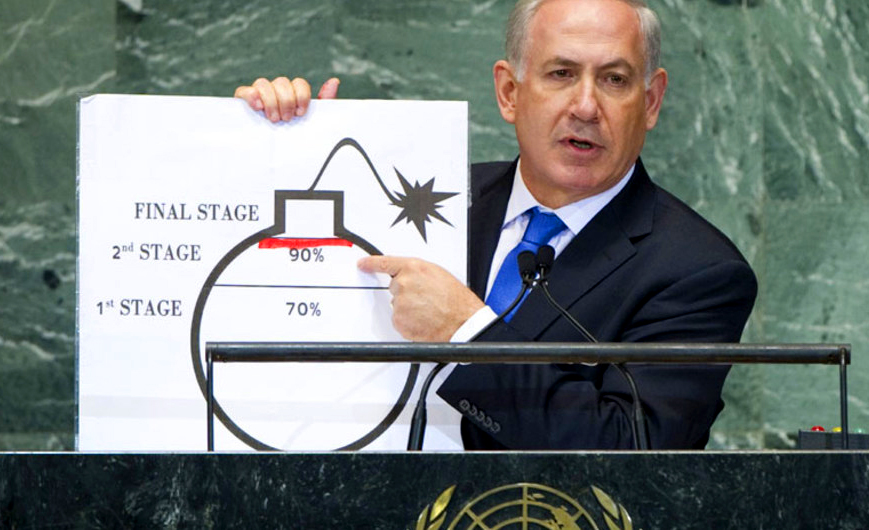 The future of JCPOA

From Israel’s point of view, Iran is an existential threat that must be dealt with immediately.

“I cannot agree more that Iran is the number-one issue,” said Amos Yadlin, executive director of Tel Aviv University’s Institute for National Security Studies. “The Biden administration will have a lot on its plate—COVID-19, economy, racial tensions, China, Russia, North Korea. The Middle East will not be in the top ten priorities. However, Iran is forcing a crisis [by] breaching the agreement and going forward with nuclear violations.”

The Joint Comprehensive Plan of Action (JCPOA) to which Yadlin referred was established more than five years ago. It placed significant restrictions on Iran’s nuclear program in exchange for the lifting of US and European sanctions. Trump withdrew from the highly controversial deal in 2018, though Biden has pledged to return if Iran resumes compliance with its provisions.

“The Democrats are committed to the JCPOA. It’s also an election promise,” said Yadlin, who spent over 40 years in the Israel Defense Forces and served as the IDF’s chief of intelligence from 2006 to 2010. “On the other hand, if you going back to the problematic agreement that even Democrats understand has a lot of loopholes, you are giving up the leverage vis-à-vis Iran.” 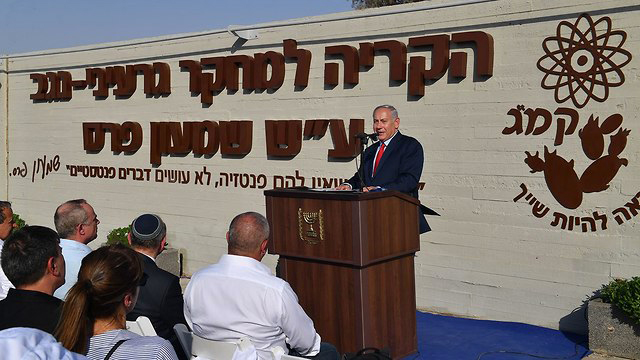 Israeli Prime Minister Binyamin Netanyahu speaks during an August 2018 renaming ceremony at the Negev Nuclear Research Center near Dimona. In his speech, he warned Israel’s enemies: “Anyone who tries to harm us will be harmed.” (Israel Government Press Office)

Overshadowing all these issues is the widespread perception that the United States has basically given up on the region, warned William Wechsler, director of the Atlantic Council’s Rafik Hariri Center for the Middle East.

“The most important thing for the Biden administration to do out of the gate is come to an internal agreement about what the remaining US interests are in the region, what our strategic ends are. Too many US administrations have started off with actions, but without internal cohesion,” said Wechsler, a former US deputy assistant secretary of defense. “Biden, once in office, will have to decide whether or not he’s going to arrest those perceptions, or allow them to continue.”

It’s unclear how the region’s geopolitical landscape would be affected if the Biden administration allows Iran to resume oil sales under a renegotiated nuclear deal.

“We don’t know how much oil Iran is exporting,” said Yadlin. “The number on the low side is 700,000 barrels a day,” he calculated, but it could be more than a million barrels given suspicion that Iran is sending oil to China that goes unrecorded—and it could go up by another million if the US removes limits on exports.

Pascual agreed that some Iranian oil would return to the market, but that “in the context of a global market of 93 million barrels a day, it’s relatively small. Once vaccines [to protect against the COVID-19 pandemic] start to become available, demand will recover — possibly reaching 99 million barrels a day by the end of 2021. 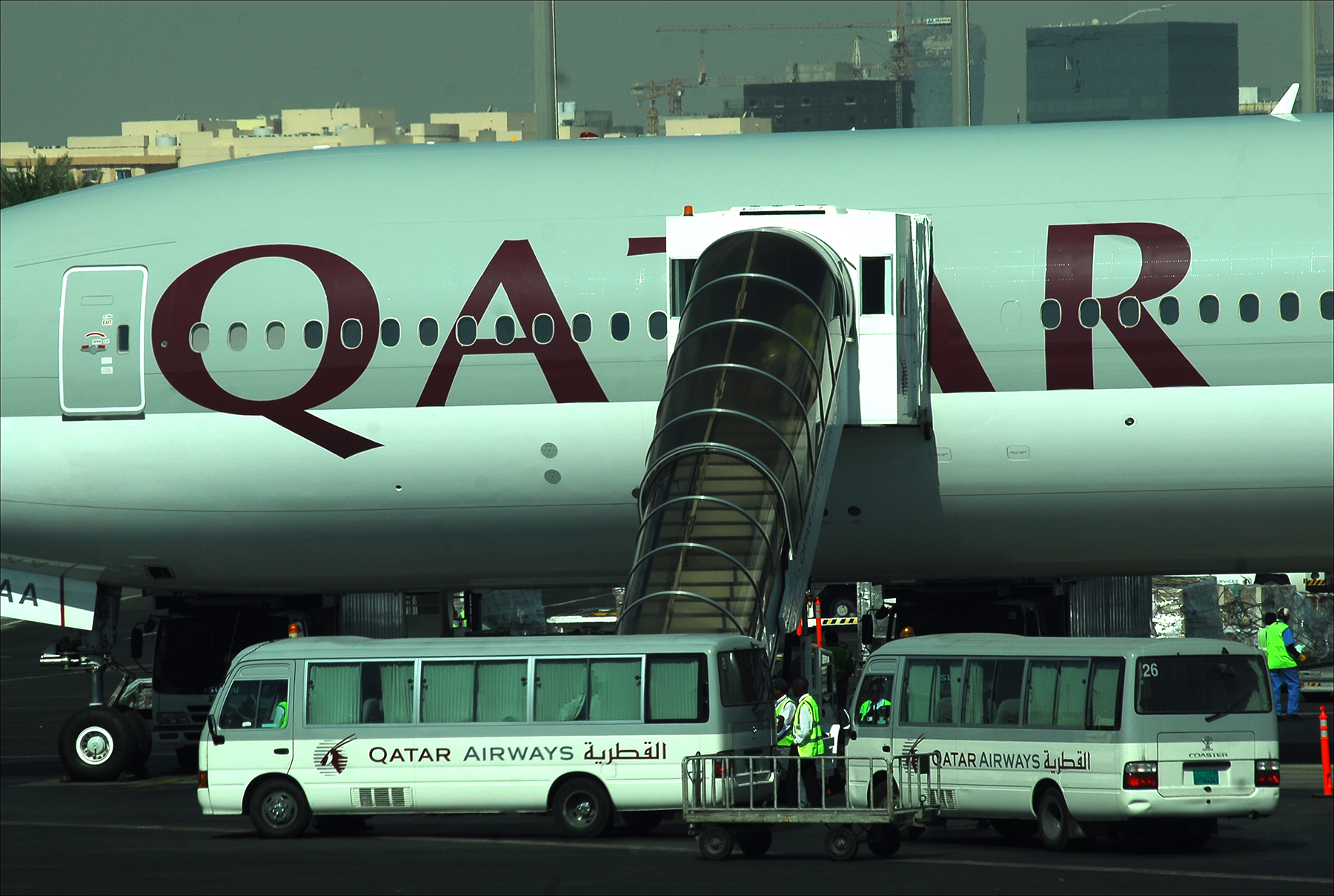 A Qatar Airways jumbo jet is parked on the ground at Doha International Airport. (Larry Luxner)

Qatar and its neighbors kiss and make up

With the recent ending of the rupture between Qatar and its five partners in the Saudi-led Gulf Cooperation Council along with Egypt, Qatar—one of the world’s top natural gas exporters—can potentially help the Middle East diversify. Pascual said it’s crucial “for Qatari gas to be not just an export product but benefit the region itself, and the importance of natural gas as a transitional fuel, as we move to a renewable scenario.”

The rapprochement between Qatar and its GCC neighbors—announced Jan. 5—has already led to the resumption of flights between Doha and other major cities throughout the Gulf, including Abu Dhabi, Dubai and Riyadh. It’s also good for Israel, said Yadlin, because it finally removes the need for the Jewish state to take sides.

Today’s Middle East is divided among four camps, he explained. The first is the radical axis composed of Iran, the Iraqi Shi’ias and Lebanon’s Hezbollah; the second are jihadist groups like ISIS and al-Qaeda. The third is the “political Islam” camp comprising Turkey, Qatar, Egypt’s Muslim Brotherhood and Hamas in the Gaza Strip.

“These are less hostile because they are not usually using military power but soft power. But in a way, they are also potential allies of the United States. Turkey is a part of NATO, and Qatar has a huge US military presence,” he said. The last group consists of pragmatic, pro-Western countries like Saudi Arabia, Jordan, Egypt, Israel and the United Arab Emirates.

“The political Islam axis and the pragmatic camp are now becoming closer because the boycott on Qatar is over. I think it’s a positive way to start the Biden era,” Yadlin said. “It gives the Biden administration the possibility to be friendly [and] have a dialogue with its allies on how to cope with the other two very problematic camps.” 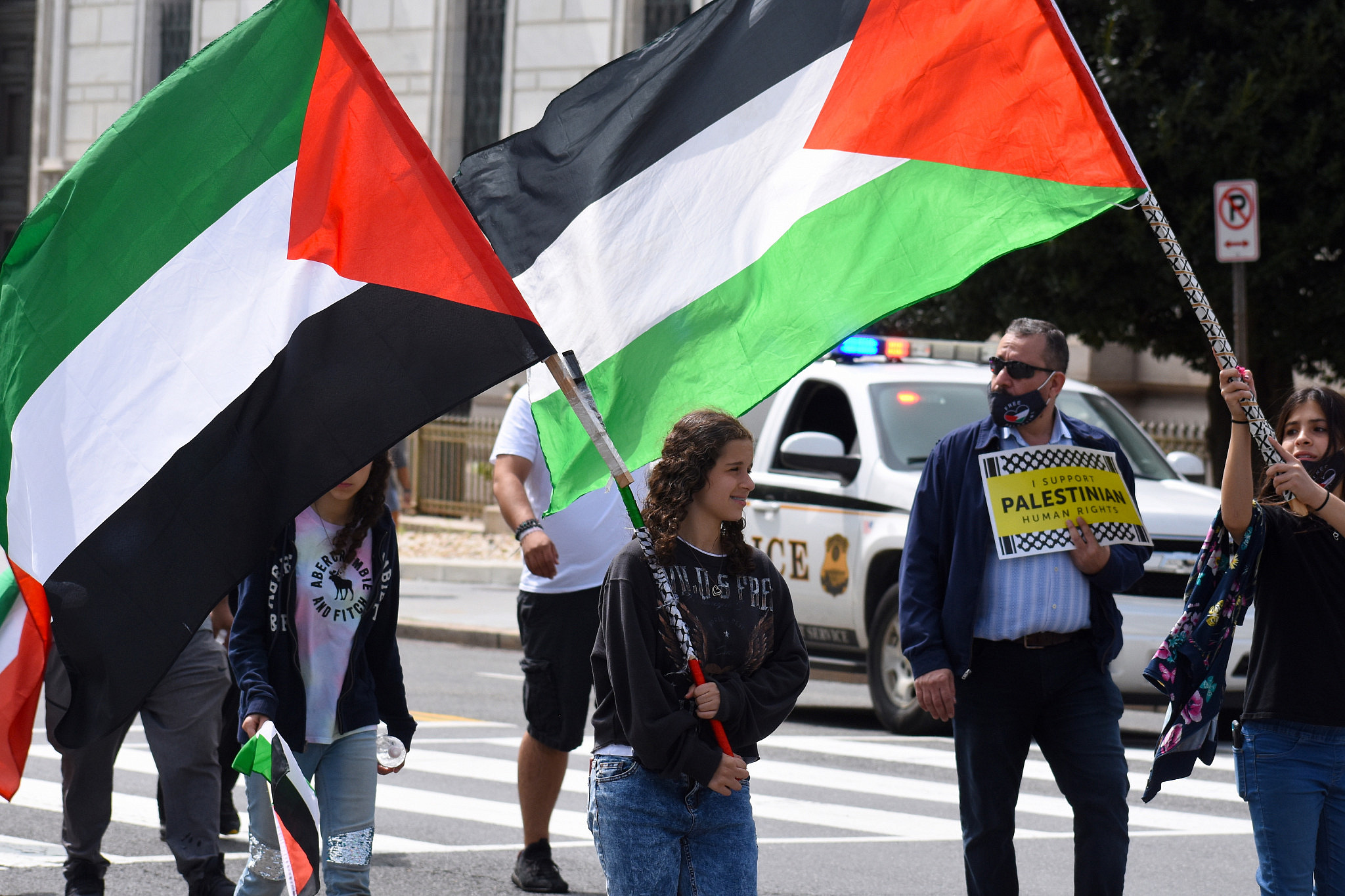 Palestinians protest the Sep. 15 signing of the Abraham Accords in Washington, D.C., between Israel, Bahrain and the United Arab Emirates. (Larry Luxner)

In fact, said Wechsler, “one of the really great things about Joe Biden becoming president” is his bedrock commitment to the US-Israel relationship—even though he may not see eye to eye with Netanyahu, who’s held power since 2009.

That said, the two leaders won’t have to squander valuable time getting to know each other.

“Joe knows Bibi, and Bibi knows Joe. We can skip that part,” quipped Wechsler, referring to Netanyahu by his Hebrew nickname. “There will be a focus on the Israeli-Palestinian challenge, but I don’t think that focus will take the same form we’ve seen previously. The last four presidents in very different ways, have sought holistic, comprehensive solutions, and have all failed. A fifth attempt is probably not likely to have a different outcome.”

Even so, said Wechsler, Biden likely will show far more interest than Trump did in alleviating Palestinian suffering “and ensuring that neither side takes any steps that will preclude the potential for a two-state solution. Although the potential for such a holistic solution right now might not be very high, it will be again in the future.”