Iran’s supreme leader has blamed the US and Israel for the protests sweeping the country following the death of a woman whilst in police custody. 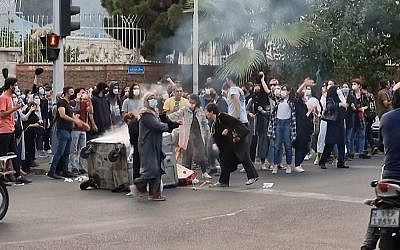 Without mentioning the name of Mahsa Amini, he said about her death: “Our hearts also burned, But what is not normal is that some people, without proof or an investigation, have made the streets dangerous, burned the Quran, removed hijabs from veiled women and set fire to mosques and cars.

I say clearly that these riots and the insecurity were engineered by America and the occupying, false Zionist regime [Israel], as well as their paid agents, with the help of some traitorous Iranians abroad.”

Meanwhile, with the continuation of anti-government protests in Iran, the Iran Human Rights Group, announced that at least 150 people have been killed in protests across the country in the last two weeks.

Despite the increase in the number of dead and the severe suppression of protests, the videos published on social networks show that demonstrators in different cities of Iran have continued their protest.

About the Author
Mohammad Zolfaghari is a Baha'i News reporter and human rights defender who worked exclusively on Human Rights Violations especially religious minorities in Iran and as a documentary maker with Amnesty International. Lives in Norway.
Related Topics
Related Posts