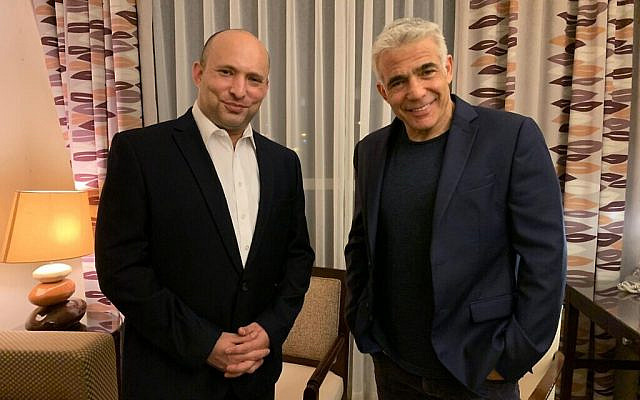 Yamina chief Naftali Bennett and Yesh Atid leader Yair Lapid are seen on Wednesday evening, as they inform President Reuven Rivlin they have succeeded in forming a government, June 2, 2021. (Courtesy)

Some political leaders are defined by big ideas and others by outcomes, even if prosaic. But with truly special ones, the zeitgeist is the legacy. That’s Benjamin Netanyahu.

Israel should feel very different after Sunday’s swearing-in of a new government even if co-leaders Naftali Bennett (slated to go first as prime minister) and Yair Lapid (succeeding him in 2023) never do a thing. It will feel different because of the change in behavior at the top.

This explains the radical polarization Netanyahu has inspired. Like Donald Trump, he is opposed by a small (and disjointed) majority of the people (and Knesset), about half of whom loathe him; and he is supported by an unmovable base of perhaps 40 percent, about half of whom adore him as a Machiavellian Messiah.

Like Trump, Netanyahu has dominated the discourse with whiplash-inducing jackhammer agitprop, and his exit might usher in a period of calm. June 13th is Israel’s Biden moment: a little like the new U.S. president, the Bennett-Lapid duo might be boring in a way that is a balm for a society in post-trauma.

Outsiders may marvel at Netanyahu’s failure to win reelection after Israel became the first country to basically vaccinate its way out of Covid-19 (indeed, he suffered four non-victories over a bizarre two-year campaign that only now has found its odd conclusion).

After all, anyone following Israel knows that personal security has been quite good under Bibi, with suicide bombings all but gone, and that he started no wars (other than the flareups involving Gaza, a conundrum no prominent Israeli politician has a solution for – though better ideas do exist). Israel is also quite prosperous due to its technology superpowerdom.

Moreover, Netanyahu as an individual wows observers not only with flawless English (fruit of a Philadelphia youth and MIT education) but also with powers of persuasion rarely encountered on the world stage: where the Trump analogy fails is that Netanyahu may be the most eloquent and quick-thinking world leader alive.

For his defenestration to have happened, then, he must have had a downside. And so he did. An epic, Shakespearean, Greek tragedy of a downside.

To begin with, because it cannot be ignored, his actual policies threaten national destruction. By cementing the West Bank occupation he brought Israel to the brink of a one-state outcome that will not be Jewish, cannot be described as democratic, and will likely come to resemble Yugoslavia more than Switzerland (see details here). And by refusing to upset his indispensable Haredi allies, he has furthered a dynamic that yields a fantastically expanding proportion of hyper-religious Israelis who are medieval in their mores, unemployable in a modern economy, and wards of the state until everything falls apart (see details here).

Yet these issues are complicated, they confuse the public, and the incoming government might not handle them much better. Bennett (unlike Lapid) is a nationalist who has yet to disengage from religious reveries about the West Bank; and while the coalition includes key players who seek to address the Haredi disaster, as a group, they project weakness and indecision.

No – the main expected difference lies in the realm of zeitgeist.

It is hard to describe Netanyahu’s comportment and retain credibility because it is quite literally unbelievable. The expenses and ethical scandals that have surrounded him know few equals in my experience covering developed democracies around the world.

The ignominy goes well beyond the three episodes that have landed him in the dock on charges of bribery, fraud and breach of trust. Netanyahu has yet to be investigated for a shady stock deal that reportedly netted him millions of dollars channeled through a cousin and involving a German company indirectly benefitting from official Israeli business which itself spawned a separate scandal – and he scraped through an array of domestic expense outrages with only his wife Sara convicted. The complaints and lawsuits by former workers of the prime minister’s residence claiming abuse, especially at the hands of Sara, are astounding.

Netanyahu in 2008 said then-Prime Minister Ehud Olmert should resign merely for being under police investigation – and Olmert did. Now himself on trial, Netanyahu has hung on with supervillain tenacity, gaslighting the more credulous into believing that a loophole enabling a prime minister to continue serving while facing charges (unlike any other minister or even minor officeholder) actually requires he stay on.

Moreover, he has whipped members of his base into a frenzy against the police, the prosecution and the courts, constantly amplifying an aggrievement narrative of deep-state conspiracies against not only him but all right-wingers.

He has incited dangerously against the Israeli Arabs who are a fifth of the population and whom the country needs to embrace, in order to deter the opposition from allying with Arab parties to dislodge him (as is now occurring).

Driven by an egomania that far exceeds even the normal level in politics, Netanyahu has sidelined and alienated almost all talented potential rivals in the Likud. He surrounded himself with a motley collection of such sycophants, petty larcenists and evident mediocrities that one suspects Israel’s continued plausibility derives from either systemic autopilot or the talented premier operating entirely on his own.

In recent years, as the situation spun out of control, Netanyahu deployed a series of creative tricks to repeatedly call new elections (including by not passing a state budget, during the pandemic of all times), which, through another loophole, left him in power indefinitely as caretaker.

Most damagingly to a young democracy, he has used his prolonged period in power to brainwash the impressionable into believing the center-left is dangerous and perhaps traitorous – and at the same time that only he can be trusted to lead the right (had he stepped down, as anyone else would have done, Likud would probably have stayed in power).

This constitutes a personality cult rivaling that of Trump, one that is infantile and dangerous in equal measure. Key legal and political figures are under protection, and it is not for fear of the mafia. The Shin Bet chief issued a public warning against the violence that can result from wild incitement, and it was not for fear of rampaging peaceniks.

The expected change, therefore, is that Israel will cease to experience relentless assault by its prime minister. Israelis might not get peace, but they can hope for competent governance, respect for norms, and the absence of a personality cult. They might even be spared the background buzz of nonstop feverish scheming.

Except, of course, from the direction of the opposition, which at least in the short term will continue to be led by Netanyahu; the Likud does not turn on fallen idols. Here, despite different systems of government, the Trump analogy holds well. Expect the new Israeli opposition, like Biden’s, to fly off the rails. 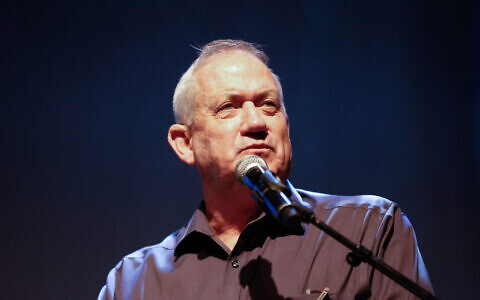 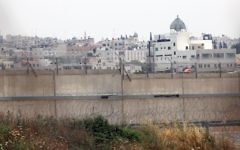 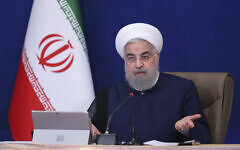 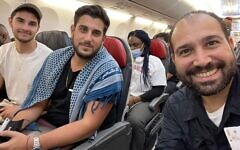