The cable car plan, approved by the government and open for public consultation until the end of March, will start at the First Station shopping complex in West Jerusalem, pass over the tranquil and historic Hinnom Valley, and pause at Mount Zion before terminating in the East Jerusalem neighbourhood of Silwan, close to the Dung Gate of the Old City.

Silwan, like the rest of East Jerusalem, came under Israeli control in 1967. The two-state solution envisaged an Israeli capital in West Jerusalem and a Palestinian capital in East Jerusalem, with each side having access to their holy sites in the Old City. However, many on the Israeli right are determined that both East and West Jerusalem should forever be part of Israel, speaking of their commitment to maintaining a “united and undivided city”.

This is fictitious: Jerusalem remains very much divided. Arabs and Jews live in separate neighbourhoods, with separate school systems, and even separate bus networks. Most Jewish Jerusalemites wouldn’t dream of visiting Arab neighbourhoods, some of which are cut off by the separation wall, and all of which suffer from a deliberate and significant lack of investment. 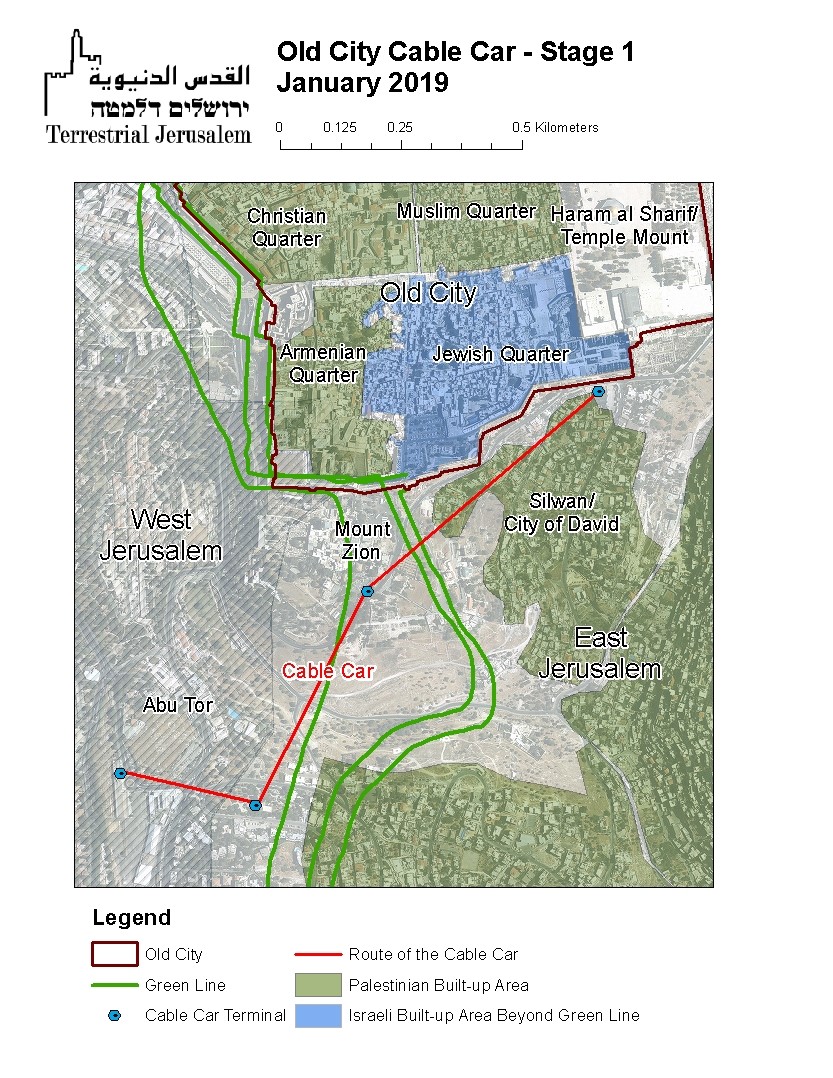 Recognising this de facto division of the city, the Israeli right is looking for ways to inextricably bind East Jerusalem to West Jerusalem, so that it can never be separated out into a Palestinian capital. That would be a death knell for the two-state solution.

Silwan, where the cable car will terminate, is home to the “City of David” archaeological site. Unlike other Israeli archaeological sites, it is run by a private organisation with an overt political agenda, the far-right settler group Elad. Elad’s stated goals are to increase Jewish presence in Silwan through archaeological excavations focused on Jewish history, Jewish tourism, and moving Jewish residents into the neighbourhood. Through these goals Elad aims to tie Silwan firmly to Jewish Jerusalem. Although archaeologists are divided over whether the site was the location of King David’s ancient city, Elad presents it as fact.

Elad is to play a central role in the cable car programme: the cable car will terminate at the top of Elad’s new visitor centre, the Kedem Center, a seven storey building to be constructed 20 meters from the Old City walls, for which planning permission was given in 2017. The visitor centre will include a Bible Museum through which the cable car’s passengers will pass, before accessing the Old City through underground tunnels. This will provide Elad with an unparalleled opportunity to impart their narrative of the area’s past, in order to influence its future. The current Palestinian residents and reality of the neighbourhood will be literally and figuratively passed over by visitors.

The cable car is one of a number of moves towards entrenching Jewish presence in Silwan, including the eviction of Palestinians to make way for Jewish settlers, refusing building permits to Palestinian residents, and a law passed in November 2018 allowing the building of Jewish homes in the City of David National Park (building homes in national parks otherwise being prohibited).

Whilst the cable car planners use the pretext of relieving traffic flow to the Old City to justify the proposal, many doubt it will achieve this goal. Rather, it’s clear that this is a far-reaching political move dressed up as urban planning. Its approval was announced on the 50th anniversary of the day Israel captured East Jerusalem in 1967, it has been fast-tracked away from the usual city planning processes, and it’s funded (at a cost of NIS 200 million) by the national government, not the municipality. Last week, the Transportation Ministry revealed that it was not involved in the project at all.

However, whilst there is no doubt that the cable car project will further the aims of both Elad and Israel’s right wing leaders, what has been described as the “disneyfication” of Jerusalem comes at huge cost to this historic landscape. It has been decried by Israeli architects and preservation experts, as well as by UNESCO.

A mock-up of how the cable car will look, taken from a film by NGO Emek Shaveh

Stepping back, the cable car project is important not only because of its implications for Jerusalem’s landscape and politics, but also because of what it illustrates about the lengths to which the Israeli right is willing to go to pursue its interests.

In giving different rights to different groups, the Nation State Law damaged the principle of equality which is so essential to democracy, with Bibi Netanyahu confirming this week that he no longer considers Israel a state of all its citizens. Inviting the fascist, Jewish supremacist Kahanist party, Jewish Power, into the Knesset in an attempt to retain a right-wing majority undermines the principles of democracy, justice and human rights. Freedom of speech is harmed by laws that permit political interference in which organisations may speak in schools, and the proposed Cultural Loyalty Bill which would limit artistic freedom. The Override Bill would limit the powers of Supreme Court to protect human rights. And we cannot ignore that 51 years of ruling over a population unable to vote for the government which controls it unquestionably damages Israel’s democratic character.

As for the state’s Jewish character, when a Masorti Rabbi is arrested in a dawn raid for conducting a wedding ceremony, when an arrangement allowing non-Orthodox Jews to pray according to their tradition at the Kotel is cancelled, and left-wing Jews are subject to political interrogations before they can enter the country, one must ask whether all Jews really are welcome in the Jewish state.

Steps such as these chip away at the essence of what is ostensibly being protected. The cable car is a highly visible illustration of this process, demonstrating the destructive lengths to which the Israeli right are prepared to go in order to pursue their vision. Each step, we are told, is necessary to protect and advance Israel, to defend her against those who wish her harm. But what kind of Israel will be left when they are done?