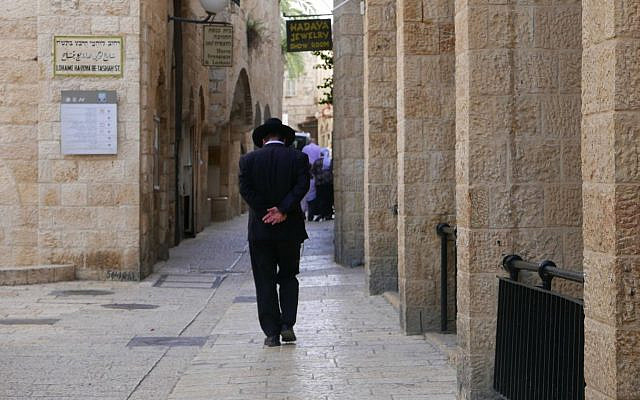 OK, so he may be religious (Dan Perry photo)

Donald Trump is such a conversation starter that he now even has Jews debating what they are. This has afforded me the opportunity of taking the US president’s side, a thing that is so rare it cannot be allowed to slip away.

At issue is this week’s executive order targeting anti-Semitism, which appears to treat Jews as a nationality. That has pleased some but also upset a host of others. The latter risk appearing ignorant of history and sadly fretful about their standing.

The situation is even more piquant than usual against the backdrop of today’s UK election in which anti-Semitism in the Labour Party is a factor, and after a deadly attack on Jews in New Jersey.

Banning evil is a complicated topic for liberals like me, a declining minority squeezed from the right by traditionalists who hate change and from the left by progressives who care little for freedom of expression (and even thought).

Curbing anti-Semitism is desirable, because anti-Semitism is real and deadly. But charges of anti-Semitism can be abusive. Within reason it should not be illegal to offend Jews, or anyone else. We cannot ban generalizations, even if they’re wrong, and especially when they’re right.

And Zionists should not conflate opposition to Israel’s policies – or even opposition to Israel’s right to exist – with anti-Semitism. As I have written, they do this often enough to cheapen not just their cause but also the memory of real victims (whose number includes my late parents, Holocaust survivors both).

Indeed, after I posted about the order on Facebook, a former colleague at AP shot back in anger that she was “dumbfounded” – arguing that the move was “all about silencing criticism of Israel” and had nothing to do with “any real care or interest in protecting and defending Jews.”

I wish I could say she was wrong. Ascribing good intention to a move by Trump (which I did not intend to do) does risk making one seem naïve.

But my main point in the Facebook post was not so much the order itself but the debate it sparked by affirming in its wording that “discrimination against Jews may give rise to a (1964 Civil Rights Act) violation when the discrimination is based on an individual’s race, color, or national origin.”

In so stating, it appeared to side with the idea that Jewishness was a national origin. That interpretation was quickly refuted by Trump’s Jewish son-in-law Jared Kushner – which to some only invests it with more credibility and gravitas.

It also sparked a popular and more credible refutation on these pages by Rabbi Michael Harvey. He argued that governments that have defined Jews as a nationality have used it to do them harm; that Jewish history is too complex to allow for simple classifications; and that “American Jews see themselves as Americans.”

I beg to differ. That a thing is inconvenient or can be abused does not make it untrue. That a matter is complex doesn’t mean that we cannot nonetheless try to tease out the essence.

I am Jewish because my parents were Jewish. That’s also why they were Jewish, going back as many generations as we know of. No one there chose Judaism as a religion. Few of my known forebears practiced it as a religion. I have many questions about the meaning of life and the origins of the universe, but I have not found answers in religion.

This aligns with an ethnicity – not with a religion. And that is how they treated themselves. It’s also how Russia, Ukraine and Romania treated them and their kin. In America, of course, it all became confused.

This issue has resonated with me ever since I first found myself surrounded by many US Jews at the University of Pennsylvania, where a college roommate who was otherwise very realistic about things insistently describing his parents as being Czechs of the Jewish religion.

I realized in time that this notion was widely considered by Jews to be helpful to achieving acceptance in America. But that didn’t make it true.

In my Facebook post I wrote was that “Jewish-American is mostly analogues to Italian-American or Polish-American. Few Jewish-Americans hailing from what is today Poland call themselves Polish-Americans, and few Poles in Poland thought Jews were just Poles of another religion. It insults history to pretend it was so.”

Of course, the religion definition can feel to some like higher calling; there are ideas involved. But to me it does not; I have quibbles with those ideas. So for Jewishness to be just a religion would exclude me and millions of others who have no religion. And that’s not too cool.

To my parents’ chagrin (for these were “Romanians” with some residual anger at the real Romanians) I spent a few years in Romania after the 1989 revolution that overthrew communism.

Almost no one I encountered there considered the Jews a religion. They were like the Roma and the Hungarians and the Germans – all of them “national minorities.” Often but not always they were visibly identifiable; the Roma most of all, of course, but the Jews probably in second place.

This is, of course, a touchy issue. Say someone looks Nordic and that’s OK. Saying they look Jewish and you’ll be branded a racist even if you’re Jewish. It doesn’t seem quite honest.

Sure – the Jewish people are racially diverse after intermarriage and conversions and far-flung communities and so forth. So are the Palestinians. And so are the Italians and so are the French, yet no one denies those nationalities. And actually I bet more people will say a person looks Jewish than looks Palestinian or Italian or French (unless they are carrying a baguette or wearing a beret).

That was quite applicable to the Ashkenazim who a century ago accounted for the overwhelming majority of Jews. Less so today in Israel, which offers up a more diverse situation with rather distinct origin groups. Also, the emerging Israeli Jewish people are increasingly different from their sizeable cohort in the United States. Still there are enough common factors, including cultural aspects some but not all of which are linked to religion, and perhaps also some pride in a rather impressive string of Jewish successes on which most readers require no elaboration (perhaps joined by shame at a few ignoble recent failures).

And religion does make it complicated. You may renounce the Jewish religion but if you adopt another one most Jews will consider you to have renounced the people. That would happen to a member of the Albanian people. I did not say it was simple.

Some Jews in the West, many educated persons especially, feel uncomfortable caring about their ethnic background enough to trouble with it. They ask: What does it matter? I cannot quibble with that, but I do say lighten up. Not everything must matter.

To be skittish about something so simple is to project weakness and a lack of assurance about one’s place in the world. That’s quite undignified, I fear.  Can that be Jewish?