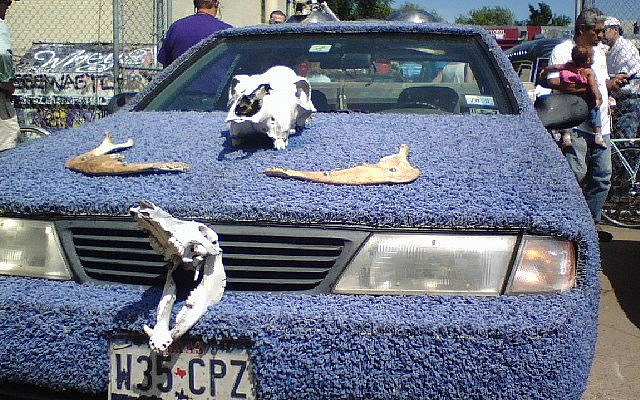 The Vehicle of the Apocalypse. (Author's photo)

And the word of the Lord came to Jonah a second time, saying: Arise, go to Nineveh the great city, and proclaim upon it the proclamation that I speak to you. And Jonah arose and went to Nineveh according to the word of the Lord. Now Nineveh was an exceedingly great city, a walk of three days. And Jonah commenced to come into the city, one day’s walk, and he proclaimed and said, “In another forty days Nineveh shall be overturned!” [Book of Jonah]

Jonah was beaten. All that time in the belly of the beast takes its toll on a guy. The odor of rot still clung to his nose. He was a details guy, a studious type, generally knew what he was talking about. Did not suffer fools gladly. That’s what galled him about the Nineveh assignment. Sure, hanging out on a leaky ship was a dead end. Career suicide. With the new administration the trade in facts had hit an all time low, a bear market for truth. Yet he persisted in staying under the radar until they finally tossed him under the ship. What a stink! You’d think it was he that caused the shit-storm. But it was the boss, the big guy. They were all out to sea, for God’s sake. That’s who sent him for a long walk on a short plank. He was just getting used to the fresh air, away from the morass of humanity. He kind of liked hanging with the career bureaucrats who kept the ship afloat, kept bailing. They seemed like they knew what they were doing. No need for the politicals. Then the big guy pitched a fit and the cruise was over.

After three days of hustling connections, Jonah found himself on the streets of the capitol. The Big Kahuna of Nineveh, not to be confused with the boss, was on all the media outlets talking trash. Same old same old, the old dog. The boss had warned Jonah this was a tough assignment, but having to suck up to this empty suit of a blowhard sure beat all. Thing was Jonah’d give his shpiel—the end is near and all that—and the Big Kahuna would nod and grin like a hyena. Then that walking insult to human intelligence turns to the cameras and says, “Folks, it’s fine. We’ve got it handled. This plague thing is not gonna touch us. You’ll see, believe you me. Dr. Jonah here, he’s a bright guy, but he’s not a believer like me. And like you, I hope.” With a wink and a nod he’d turn on his heels and exit into a nearby helicopter, or river barge, or bathysphere. Whatever conveyance befitted his majesty. It was hell for a knowledge guy like Jonah. He had the download, after all, the four-one-one. This was exactly why he had refused to go to Nineveh to begin with. What’s the point? The only thing worse would be if that baboon in the shiny suit got lucky and the whole thing DID blow over. That would be a fine kettle of fish! Talk about stink, that really would. After all the chicanery, double-dealing, lying, cheating and general debasement of human values, for this tragic excuse for a human being to come out smelling like a rose would be more than Jonah could bear. On a good day. And this was not looking like a particularly good day.

But Jonah persisted. He appeared on all the networks with his sober warning about the coming plague that could only be averted if the people changed their behavior, their comportment, their fundamental way of relating to one another. But then the Kahuna would do a spot at prime time, get all the networks to cover it. The gist of it was, “Sackcloth and ashes? You gotta be kidding! That would ruin the economy. The toll on clothing outlets alone would be devastating. And think of the cosmetics industry! It’s downright cruel, if you ask me. And I am the one you should be asking. Frankly, the sight of all those citizens dressed in rags and dumping ashes on their heads would turn my stomach, you know what I mean? Most people feel the way I do, or at least they should. Who’d want to even go out on the street under those harsh conditions? I tell you the streets would be empty, all business would come to a halt and the entire economy of Nineveh goes down the tubes. Sheesh! Who wants that to happen?!” Who indeed?

So the people listened to their Bozo-in-Chief, what Jonah called him in the privacy of his chambers. But the big boss nudged Jonah to continue with his regular PSAs. It was unbearable. There was a sizable cadre of the Kahuna’s camp followers who targeted Jonah with their taunts and calumnies. A whole pack of hyenas barking to the tune of the hyena-in-chief. But Jonah persisted, day after day, week after week, regular as the sun in its course. And somehow, by some means undetectable to faithful Jonah, the message got through. In fact the big buffoon started pretending it was his idea all along, “You know, I kind of like the look of sackcloth. Very simple, almost elegant in a way. And I think we can invoke the Defense Production Act to get the clothing manufacturers to start churning out sackcloth suits and chemises and vests and every other kind of sackcloth fashion statement till the whole country is decked out in the stuff. My daughter can even do the designs! No extra charge, from me at least. Ashes should be pretty simple, too. We’ve already been shredding every bureaucratic document we can lay our hands on. Turning them to ashes would take the flick of a switch. Probably need to ramp up the incinerator biz to get it all done pronto. Come to think of it, we’re going to need to fuel all that industrial activity, so a little payola to the oil and gas folks would be in order as well. And just to make sure it’s all on the up and up I’ll personally inspect the whole carnival act myself. What a plan!”

And the word reached the king of Nineveh, whereupon he rose from his throne, took off his royal robe, covered himself with sackcloth, and sat on the ashes. And he caused it to be proclaimed and published throughout Nineveh: By the counsel of the king and his nobles, saying: Neither man nor beast, neither cattle nor sheep shall taste anything; they shall not graze, neither shall they drink water. And they shall cover themselves with sackcloth, both man and beast, and they shall call mightily to God, and everyone shall repent of his evil way and of the dishonest gain which is in their hands. [Book of Jonah]

What a plan indeed, albeit much delayed. That ‘don’t drink water, only cocktails’ bit was a nice touch, too. Kept the booze industry in the red. And Jonah be damned, it worked. Kind of. Well actually a few hundred thousand people got sick, some pretty bad, and a not insignificant percentage of them died. And a bunch of people lost their shirts. But as the Hyena-in-Chief liked to say, “You can’t make an omelette without breaking a few eggs!” They’d been betting on the plague to kill off mostly the poor and elderly, decrease the surplus population or some such. Informal ‘death panels’ as the Kahuna’s most ardent followers would exclaim with glee. Hilary eat your heart out! And that is more or less what happened. The Kahuna and his foxy spinmeisters persuaded the surviving public that it all worked out as well as could be expected under the circumstances. We better keep the same folks in charge who got us through this mess, right? Who knew such a dire natural peril was aimed straight at the heart of Nineveh? Who indeed? Well, Jonah for one. And all the other folks on that leaky ship of state they were all trying to keep afloat in spite of the Kahuna’s flunkies having decimated the crew and the budget. Woe betide the bean-counter without political connections.

Jonah was pretty damned upset. This was about as bad a scenario as he could’ve imagined. The disaster actually struck hard but the Buzzard of the Apocalypse, his latest nom de guerre for the Kahuna, was still sitting pretty with his hand in the till. Jonah was sorely aggrieved. He could just die. He moaned a piteous sorrowful moan. Every morning he woke up and saw the Kahuna on one of the new television networks he had ‘funded’ during the plague, under his supervision of course. “Boss!” Jonah would yell into his hand-held device, “How could you let such a malevolent turkey off the hook? Where is cosmic justice? Where is karma? Where are YOU? Can’t you see what’s happened? If I had just shut up and let the jerk keep downplaying the whole thing it would’ve been a lot harder for those assholes to spin it after the fact. Now all we got is death of the innocent and yet another resurrection for a cat who just refuses to die. Where are your thunderbolts? Your terrible swift sword? Couldn’t you at least just open the earth a little and swallow the dude?” Silence. No direction shown. Jonah never heard from the boss again. Maybe he was away on business. Jonah was starting to wonder if he’d hallucinated all the conversations they’d had. Then he remembered the plague. Maybe he’d pay a visit to his old buddy Job.