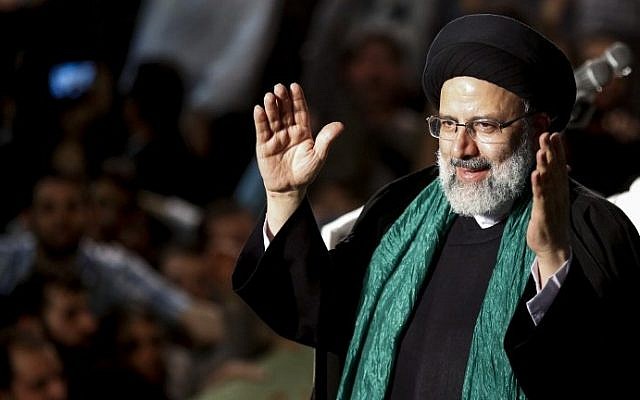 Iranian presidential candidate Ebrahim Raisi greets his supporters during a campaign rally at Imam Khomeini Mosque in the capital Tehran on May 16, 2017. (AFP Photo/Atta Kenare)

This weekend marked the 39th anniversary of the 1979 Islamic Revolution, and hundreds of thousands of Iranians took to the streets to celebrate. In a show of Western defiance, the regime displayed its Ghadr ballistic missile which has a range of 2,000 km (1,243 miles) — roughly the distance between Tehran and Jerusalem. Many of the revelers burned American and Israeli flags, while others burned a white sheet reading “BARJAM,” the Farsi acronym for the 2015 Joint Comprehensive Plan of Action, more commonly known as the nuclear deal.

Two and a half years after the signing of the nuclear accord, we are seeing the fallout from a deal that emboldened and financially enabled Iranian aggression. The lifting of sanctions, which allowed Iran to once again sell its crude oil on the international market, should have translated into relief for millions of Iranians struggling with rising food prices and soaring unemployment. But no relief came.

Rather, Tehran funneled its new wealth toward its regional march of aggression. As reported in the Washington Times, the US government has traced funds from the $1.7 billion released following the deal to Iranian-backed terrorists.

In the lead up to the deal, the P5+1 dismissed the overwhelming evidence of Iran’s cunning and mendacity. Its architects peddled the notion that a deal with Iran would make the world safer and more secure. It’s time for the architects to admit that they were wrong.

It should come as no surprise that ignoring, excusing, and exonerating decades of Iranian duplicity has left the regime dangerously bolder than ever before.

Its support for the Houthis in Yemen has all but crippled that country. In Gaza, Iran continues to fund and fuel Hamas’s hostility against Israel.

And thanks to Iranian weapons, funding, and training, Hezbollah has committed itself to a war of annihilation against Israel. The terror group has upwards of 150,000 sophisticated missiles, which it has hidden among the Lebanese civilian population.

On January 30, Ebrahim Raisi, the designated heir of Iranian Supreme Leader Ali Khamenei, toured the Lebanon-Israel border alongside senior Iranian and Hezbollah officials. He told the group, “We see today the influence of Hezbollah across the Islamic countries… Hezbollah’s fighting and efforts have caused the establishment of the steadfastness and the resistance in the Islamic countries. Inshallah, soon we will witness the liberation of Jerusalem.”

In Syria, Iran has provided the financial, political and logistical support to sustain the barbarous Assad regime. There should be no doubt that Tehran is complicit in the massacre of half a million Syrians and the country’s devastating humanitarian crisis.

At a recent Security Council session, Israel’s Ambassador to the United Nations, Danny Danon, detailed the 82,000 fighters directly under Iranian authority in Syria, including 3,000 members of the Islamic Revolutionary Guard Corps, 9,000 members of Hezbollah, and 10,000 members of Shia militias recruited from across the region, including Iraq, Afghanistan and Pakistan.

Tehran has made no secret of its ambitions. It has successfully fashioned a Shiite crescent of influence across the heart of the Middle East, linked by a network of allies and proxy forces spanning from its own border with Iraq all the way to Lebanon.

Israel has long warned of Iran’s intention to open a new front of active confrontation. This encroachment is not solely a challenge to Israel; rather, it presents a threat to rival Sunni Arab powers led by Saudi Arabia, as well as American interests in the region. Indeed, Iran’s proxy allies in Iraq have openly threatened violence against American troops.

The Iranian regime is as cunning as it is incorrigible. It has learned that each act of belligerence is met with little more than international hand-wringing, and so it has continued to provoke.

In open defiance of United Nations resolutions — an admittedly underwhelming threat — it has developed and tested intercontinental ballistic missiles.  One of its rockets was launched a mere 1,500 yards from an American navy vessel. This act of aggression did not even earn the ayatollahs a slap on the wrist.

It is little wonder that Iran believes itself invincible — after all, it has found itself almost entirely immune from consequences. This weekend, it tested Israel’s red lines by sending a stealth drone into Israeli territory.

In response, the IAF launched a widespread retaliatory offensive against Iranian targets in Syria. One Israeli fighter jet was downed by Syrian forces on its return to Israel — a windfall for Iran which raises the specter of further confrontations.

So here we are. Iranian hegemony grows unchallenged. Iran continues to aggressively destabilize the region. The nuclear deal remains intact. And in fewer than eight years, the deal will sunset, lifting all restrictions on Iran’s nuclear ambitions. Now tell me again how the Iran deal made the world safer and more secure.

About the Author
Aviva Klompas is a speechwriter, strategist, and public speaker. She currently serves as the Associate Vice President of Strategic Israel Engagement at Combined Jewish Philanthropies. Previously, she served as the Director of Speechwriting at the Permanent Mission of Israel to the United Nations.
Related Topics
Related Posts
Comments