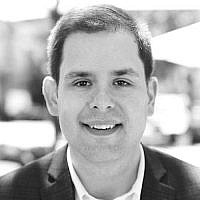 The Blogs
Ben Goodman
Apply for a Blog
Please note that the posts on The Blogs are contributed by third parties. The opinions, facts and any media content in them are presented solely by the authors, and neither The Times of Israel nor its partners assume any responsibility for them. Please contact us in case of abuse. In case of abuse,
Report this post.

I’ve been trying to understand why this week has felt so fraught for those of us in the diaspora who support Israel. It’s not like Israel hasn’t been under attack before — in my lifetime alone, Israel has faced the Gulf War, the Second Lebanon War, the Second Intifada, and regular rocket attacks from Gaza.

I’ve had the opportunity to travel to Israel for extended periods over the last few years, most recently, leading a young leadership mission of young professionals with Jewish National Fund USA focused on economic development in Israel’s frontier communities. Many of us have been on the phone over the last week, sharing our distress not only about what is going on in the ground in Israel and Gaza — but the response of our friends here in the United States.

Perhaps, I thought, our stress was because we knew individuals under siege — or because we had spent time in communities under attack. When a rocket killed a mother of two in the beautiful city of Rishon LeZion this week, I quickly texted a friend there to make sure she was safe. I have spent many days in Sderot where a 5-year-old child was murdered by a Hamas rocket this week.

Perhaps, those were all factors — but then, reading Bari Weiss’s (as always) eloquent piece this week, The Bad Optics of Fighting For Your Life, it hit me. It was, as Weiss wrote, that “the world has gone Corbyn”:

It appears that standing up for the right of innocent people to protect themselves from a genocidal terrorist organization has become extremely risky to one’s “brand.” And so lies have replaced truth. Memes have replaced morality. Hashtags have replaced history.

All week, those of us who care about loved ones in Israel have watched as friends and prominent, trusted messengers, have shared social media content that has whitewashed the bloodlust of Hamas and its enablers. As Israel took targeted actions to take out terrorist capabilities that had sent hundreds of rockets into civilian areas, the popular narrative told us that Israel had no right to respond — because Israel had the ability to protect large parts of its population.

Anyone with a heart cannot help but feel sympathy for the plight of the Gazan, particularly during a week like this one. The subpar living conditions and lack of opportunity is cruel and unconscionable — and it is a direct result of political leadership that has failed Palestinians for more than a generation. But including the ins and outs of a 73-year-old disagreement into an Instagram meme is not easy.

As one of my public high school teachers declared on Facebook this week that Hamas “should” fire hundreds of rockets into Israel because “[when] fighting a fascist state, the gloves come off,” I texted with a friend in Tel Aviv watching missiles flying past her window. As I was accused of “supporting ethnic cleansing” for posting my own “I stand with Israel” meme lacking nuance, another friend assured me that despite the family killed in their city, their parents were fortunate to have access to a bomb shelter, and would be okay.

What has been most frustrating this week for those of us who care about Israel, safe and thousands of miles away, has been the dehumanization of the Israeli people. We have been rightfully told to be concerned about the Palestinian, but told that Israel should not respond as a State Department-designated foreign terrorist organization has indiscriminately fired more than a thousand rockets into civilian areas. We have heard politicians speak of the plight of the Palestinian family, provided advance warning of targeted Israeli strikes, without any discussion of the Israeli children running for cover from incoming weapons of war with only seconds to spare.

An Israeli friend, Ella, after being confined to her apartment all week, considered venturing out to visit a friend across town. Ultimately, she told me, it was not worth the risk of being injured by a rocket while in transit.  If she were driving and an alarm were to sound, what would she do? Lie down in the road? Run into a nearby building?

“It’s crazy that I can not meet my girlfriend who lives at the other end of town,” she told me. “It’s not that far, but the trip could be dangerous. I also have to ask her weird questions I did not ask before like: Do you have a shelter at home? Is the building old or new? How far is the shelter from your home?”

Her friend has no shelter in her home. When a warning sounds, she often lies on the floor and cries over the phone to Ella, praying that a missile will not destroy her home and take her life. Ella, on the other hand, is slightly luckier, with a large shelter in her building. When an alarm sounds, she has about a minute to get down to safety.

I believe that the fear and anguish that Israelis like Ella and her friend experience are worthy of your time, concern, and attention. Sadly, the international community decided otherwise this week.

As activists have tried to force one of the longest conflicts in history into 280 characters, we have been told that Israel is not a legitimate state, but a settler colony. We have seen a complicated, geopolitical fight uncomfortably pushed into a Western media and political narrative that fails to account for the melting pot that is modern Israel. “From the River to the Sea” has gone mainstream once again, an easily tweetable call for annihilation of the 6.3 million Jews living within Israel’s borders.

I was raised to believe that my own safety and standing in the diaspora depended on a safe haven for Jews that had the ability to defend itself. Perhaps that is an old-school way of thought; but it’s not hard to understand why my father, whose high school prom was held at a New Hampshire hotel that did not serve Jews, would see the world that way. Having been only a generation removed from a family who left the Pale of Settlement for the United States, narrowly surviving a certain death in the Holocaust, it’s hard not to see his line of thinking.

Criticizing the actions of the government or military of the Jewish state is not antisemitic, but dehumanizing and devaluing the overwhelmingly Jewish population certainly is. This week, the world’s oldest hatred went mainstream as millions advanced a narrative designed to minimize the actions of a terrorist organization that has used land ceded by the Israelis in good faith, for Palestinian self-rule, to fulfill the goal of its charter: to destroy Jews and the Jewish state.

As we are told that one can separate their opposition to the right of Jewish self-determination from their support for the Jewish people, synagogues around the world are tagged with “Free Palestine” graffiti. Never mind that Hamas leaders continue to call for the murder not of Israelis, but of Jews; millions around the world have done Hamas’ bidding by filtering out their barbarism.

While the current military campaign may only last a few more days, the sad reality is that this week was only the taste of what is to come.  Social media, filtered of nuance, will continue to allow radicalism to be condensed and widely disseminated. And the sad fact is that as the dehumanization of Israelis and Jews around the world continues to go mainstream, the more that the Jews of the world will depend on a strong, free, and independent Israel.

About the Author
Ben Goodman is a public policy professional based in Washington, DC. An active advocate for Israel, Ben previously served as a foreign affairs adviser on Capitol Hill.
Related Topics
Related Posts
Comments