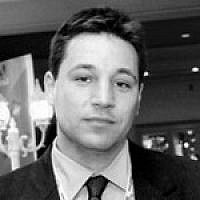 The Blogs
Gabriel Bacalor
Apply for a Blog
Please note that the posts on The Blogs are contributed by third parties. The opinions, facts and any media content in them are presented solely by the authors, and neither The Times of Israel nor its partners assume any responsibility for them. Please contact us in case of abuse. In case of abuse,
Report this post.

An ambitious popular initiative among ordinary citizens is tinged with hope for Palestinians and Israelis. Minds of Peace, is an NGO which for over 3 years has met in the streets of both States and conducted People-to-People congresses, in which the most controversial aspects of the conflict are discussed. In this interview Sapir Endelman and Gabriel Bacalor, coordinators for Minds of Peace, share their views about the initiative.

-Why is there a lack of progress in the peace process between Israel and the Palestinian Authority?

Gabriel Bacalor: The international community’s main mistake is to believe that governments, by themselves, have the ability to create the conditions for a peace agreement. The meager results we see today are neither more nor less than the reflection of the delivery of decision-making sovereignty to politicians and the lobbies they represent.

– What does Minds of Peace propose in this regard?

Sapir Endelman: We are a grassroots NGO. We work directly with people in the streets of the Palestinian Authority and Israel. We call on the citizens of different ideological and political backgrounds and they are the ones who make the delegations negotiating peace agreements. Thus, in the last 3 years, we have held 24 popular congresses in Israel and Palestine and between them they have, in most cases, attained agreements.

– What types of people make up the delegations?

GB: The Minds of Peace People-to-People congresses include citizens from across the ideological, social and political spectrum; from Israeli settlers living on the outskirts of Ramallah and Nablus to Palestinians who spent much of their lives imprisoned in Israeli jails. Usually we have the presence of Generals and other high-ranked members of the Israeli army and the Palestinian Security Forces. Social activists, academics, educators etc. all attend. Anyone willing to negotiate with the other party, regardless of their political or ideological stance, may be part of the delegations.

– Do you think that a Jewish settler can negotiate with a former Palestinian terrorist and come to an agreement?

SE: Perhaps surprisingly, this is what we experience on a day to day basis. In fact, the people with antagonistic views are reaching more effective agreements on sensitive issues of the conflict. Palestinian delegations tend to complain about the views of extreme left-wing Israelis. They say they do not understand their reality and arrive at the negotiating table with preconceived ideas about what should be demanded by the Palestinians. In contrast, Israelis with center or right positions listen to the needs of the Palestinian delegates and then set conditions, thus building a sustainable rather than theoretical basis for negotiation.

– Working directly with the public are you not aware that changes are executed through politics?

GB: We are aware that an agreement should involve political structures. But we also believe that profound changes are rooted in the foundation, in the people’s political participation and awareness of commitment to their rights and obligations. In the Middle East, politicians are by nature conservative. The existing forces have not instituted change, so the role that we take is to facilitate and shape the pressure of masses necessary for citizens to feel supported, with enough time to take bold and concrete steps towards peace.

– Have you been tempted to become involved in political life?

SE: We are volunteers who practice politics from the street. We hold regular meetings with representatives of the Israeli and Palestinian governments, members of the State Department of the United States and the European Union. All our actions at this level are only intended to coordinate activities so that the People-to-People congresses can develop in an atmosphere of harmony. So, for example, we combine efforts between the security forces to prevent abuses and ensure that all delegations and attendees can express their ideas in a civilized framework with mutual respect.

– How do you respond to critics who say that you are Israelis negotiating with terrorist accomplices?

GB: We propose that these slogans be analyzed. Peace agreements are signed between enemies. Furthermore, the concept of terrorism has a different meaning whether you ask an Israeli or a Palestinian. For Israelis, broadly speaking, a terrorist is someone who kills or attacks a civilian. But for many Palestinians living in the West Bank under Israeli control, Jewish settlements in the foothills of the mountains or the checkpoints everywhere that restrict their mobility and labor, are all seen as acts of terrorism. Therefore, to participate in Minds of Peace and communicate with the “other” helps one perceive that his/her own truth is not absolute.

– Are there any examples where People-to-People negotiations have contributed to peace processes?

SE: Important historical conflicts have been resolved through popular negotiations, among them, South African apartheid. Nelson Mandela and Frederik de Klerk realized that without popular participation, peace would not be possible. They then called 3 conventions, referred to as CODESA (Convention for a Democratic South Africa), which ended the apartheid regime. Another instance in which people’s congresses played a decisive role was in Northern Ireland. The Irish conflict, with deep religious roots, was finally resolved peacefully in the mid-1990s after the All-Party Talks, in which those involved agreed to abandon the armed struggle.

– What role do the violent factions of Palestine and Israel play in the success or failure of the negotiations?

GB: We understand that as we approach final agreements, the reaction of violent minorities will increase. Depending on the contextual conditions, violence can break the negotiations or consolidate a peace agreement. Historical experience indicates that in advanced negotiations the second scenario is more likely. In the case of South Africa mentioned by Sapir, CODESA achieved its goal after the assassination of the black leader Chris Hani in April of 1993. Similarly, in Northern Ireland, the terrorist attack in Omagh, with 29 fatalities and more than 200 wounded, was the trigger for the signing of the Good Friday Agreement, which brought an end to the conflict.

– Can the demonstrations of violence that have been seen in recent Minds of Peace events in Jerusalem and Ramallah have the opposite effect?

SE: We do not consider that violence today can be capitalized upon for agreement. The manifestations of hate appear to benefit extremist groups and corporate interests. However, in Jerusalem, the settlers organized and led by Arie King attended en masse to boycott the event, but ultimately did not. In Ramallah, it was the anti-normalization forces of Mustafa Barghouti who tried to violently attack us, but they were controlled by the Palestinian Security Forces. They are minorities who do not represent the majority. The people want to live in peace and harmony.

– What is the reaction of the people who make up these popular congress delegations?

GB: It’s heartwarming. For those Palestinians who have no contact with Israelis and vice versa, the first reaction is shock. They meet, committed and open to dialogue and interested in learning more about the other’s point of view. As the congress develops, and interaction with the actively involved public elicits comments which, I assure you, are not always politically correct, a sort of ideological rupture occurs. Thus, we see people who are ideologically “right” closing “left-leaning” agreements and vice versa. The commitment to interact face-to-face breaks down personal bias, challenges old beliefs and modifies behavior.

– What types of agreements have been reached?

SE: In the 24 congresses already held, agreements have been reached on key aspects of the conflict: borders, refugees, economy, water, military control, etc. Surprisingly, when the matter involved is a resolution of a specific problem, agreements are reached which are impossible to achieve at the negotiating table of external bodies, such as the European Union. When a settler is in a dialogue with a Palestinian about territoriality, they speak of their adjacent neighborhoods, the road leading to both their homes, shared systems and problems of irrigation and water, their mutual safety and that of their families. They understand that their destinies are linked, and that there is a need for two States to be achieved within a framework of rationality.

– What is the role of the media in the people’s congresses?

GB: The involvement of the media is essential for us to build up the popular learning process that we are promoting at Minds of Peace. The correspondent’s personal commitment allows these proposals to reach many more people. Our intention is that every person in the world will know of all the good efforts Palestinians and Israelis make jointly for peace. People-to-People congresses are a breakthrough in this sense, by strengthening the idea that dialog can help both peoples overcome fear and deception.

* The interviewer is the Editor-in-Chief of the newspaper Nueva Sion, Buenos Aires, Argentina.