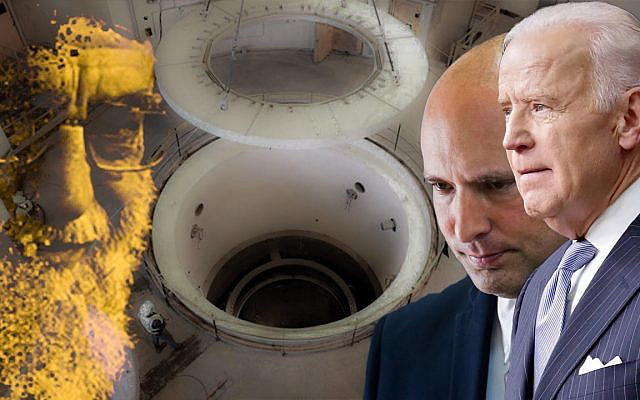 What is Islamic regime in Iran’s intentions in Vienna? Non-Iranian intelligence agencies do not appear to know what is going on. Several weeks ago, there was a flood of Israeli predictions of an imminent deal in Vienna but those fears have certainly not materialized and now even the Americans appear skeptical at the feasibility of a return to the JCPOA. It was argued all along that the Islamic regime in Iran is merely playing for time in order to advance their nuclear weapons program while appeasing Beijing and Moscow through pro forma participation in “negotiations”. While it is true that Ayatollah Khomeini instituted a state principle that Sharia has precedence over Iranian national interests, this is a religiously motivated apocalyptic regime with fundamentally irrational motivations. The game theory notion that this totalitarian regime can be bought off through oil revenues for 3 years until possibility of Donald Trumps return to the White House and rescinds the agreement fundamentally misunderstands the Islamic regime. The Islamic regime of Iran are not fools and do understand that the Americans are trying to buy time by buying them off for three years and this Islamic regime is not falling into this “trap”. This Islamic regime believes that they were deceived by the Americans when the Trump administration rescinded the JCPOA and have simply no interest in repeating this scenario. The Islamic regime of Iran is not of the view that their national honor is up for sale. The Mullahs do understand that Joe Biden will not be re-elected and so for them giving up their enriched uranium in return for three years of substantially increased oil revenues simply does not make sense. It may be a rude awakening for some but not everyone can be bought off with money.

Of course, rationally speaking, it makes perfect economic sense for Islamic regime of Iran to return to the JCPOA but it would also make perfect economic sense for them to normalize economic and diplomatic relations with the United States and that is not about to happen either. Islamic regime of Iran clearly prioritizes accelerating its nuclear weapons program over temporarily increased oil revenues. As for trade and investments, Islamic regime of Iran is all too aware that the international private sector will not be interested in investing in or trading with them considering that American economic sanctions would be reinstated in only three years time. Then there is the apocalyptic imperative. The Khomeinist regime is longing for the apocalypse, which they intend to bring about using weapons of mass destruction around the world. They believe that this man-made apocalypse will prompt the reappearance of the Hidden Imam and so the octogenarian Ayatollah Khamenei has every personal incentive to bring about this messianic event in his own lifetime.

Put yourself in the shoes of the ruling Mullahs, you believe that you have the power to bring about the coming of your long-expected Messiah, why would you defer that event in return for money? It is important to understand that the Iranian nuclear weapons program has significantly advanced in the seven years that passed since the signing of the JCPOA. The Islamic regime of Iran believes that nuclear weapons are within reach and that no one will prevent them from developing a nuclear arsenal. They argue that if contrary to their expectations their nuclear weapons program is destroyed, then they will recognize this as a divine sign that it is time for the apocalypse and so they will lash out around the world with chemical and biological weapons against those nations the Islamic regime of Iran deems to be central to the apparent global Jewish-American conspiracy to destroy Islam.

Every week in the past months we have heard that the coming week will prove determinative in Vienna but it always comes to nothing. It could be argued that Israeli intelligence (particularly Aman) miscalculates the intentions of Islamic regime of Iran in Vienna although it could of course, still be proven wrong. There is a whole intelligence analysis culture in Aman of miscalculating both Hezbollah and the Islamic regime of Iran and this is a big CONCEPTZIA (Hebrew for strategic error with devastating military consequences). Israel has long avoided confronting Hezbollah and will pay a particularly heavy price in vast numbers of killed Israeli civilians. Of course, the heaviest price will be paid by the American people whose current leaders recklessly undermined and single-handedly destroyed America’s deterrence vis-a-vis Islamic regime of Iran through the futile Vienna negotiations which were always stillborn due to Islamic regime of Iran’s strategic rejectionism. Mullahs plans to perpetrate genocide with biological weapons against major American cities after Israel and/or the United States destroy the Islamic regime of Iran nuclear weapons program. The regime in Iran is absolutely convinced that Allah is on their side and that the apocalypse is increasingly imminent, after all they determine the timing.

What then you may ask is different, now and then in 2015, when the JCPOA was concluded? The JCPOA was successful from Islamic regime of Iran’s perspective in breaking up international unity against Mullahs amongst the permanent members of the United Nations Security Council and pivotally removing international sanctions against Islamic regime of Iran. Notably, these achievements will remain in place even without a return to the JCPOA. Nevertheless, Islamic regime of Iran felt it was cheated by the apparent American-Jewish conspiracy, when President Trump revoked the JCPOA in 2018 and now when, they believe that nuclear weapons are within reach, the Mullahs are in no mood for deferring their nuclear weapons program.

In late 2021 US government officials repeatedly stated that negotiations would end by early February 2022 were, there will not to be an agreement for a return to the JCPOA before that. Now it is early April and American officials publicly acknowledge that a return to the JCPOA is neither certain nor imminent. The first question is of course for how long the Vienna charade will go on and the second question obviously is when the Islamic regime of Iran will enrich uranium up to weapons grade purity? There are no apparent answers to either question but what is obvious, is that the Islamic regime of Iran is operating according to their own game plan and their own time schedule and the Americans are behaving exactly as they want them to at the same time as Mullahs continue to masterfully manipulate Moscow and Beijing in appeasing both great powers in a carefully calibrated manner through pro forma participation in “negotiations”. The Islamic regime of Iran believe that President Biden is a hopeless fool who poses no danger to them and whose administration has issued empty threats that simply cannot be taken seriously. Irrational totalitarians are as many times before in modern history successfully manipulating international politics.

What is certain is that a strong and determined will from the West is required.