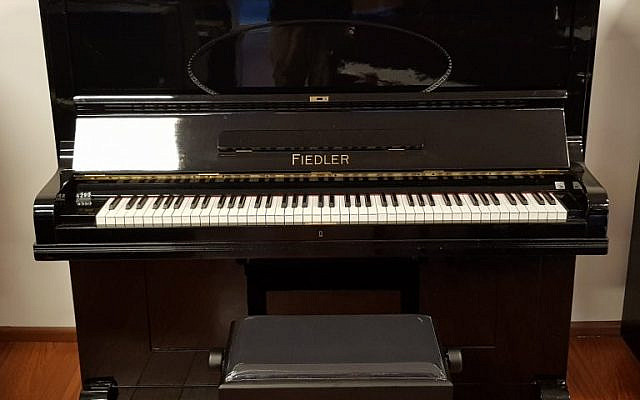 There are many stories about Lithuanian Holocaust perpetrators concluding their mass murders of Jews in Lithuania with entertainment and music. The most infamous is the Lietūkis garage pogrom in Kaunas where one of the murderers stood on top of a pile of Jewish murder victims and entertained his fellow murderers and the Lithuanian spectators with an accordion. Few, if any at all, doubt the veracity of that event. The only dispute is whether the murderer performed the Lithuanian national anthem or some other patriotic song. Whichever it was, he considered his murders of Jews as a patriotic act for Lithuania.

Many of the mass murders in Lithuania were accompanied by heavy drinking and song. Those who seek to downplay the role Lithuanians played in the Holocaust usually suppress this aspect of the mass murders, or claim, as in the Lietūkis massacre, that the witnesses, (in this case allegedly German soldiers), didn’t know and couldn’t identify the song being performed. In disputing the songs sung and the music played they attempt to cast aspersions on the veracity of the testimonies.

Performance of music on top of corpses enhances the desecration and molestation of the victims in the minds of the murderers, after all, they were murdering and stealing for their Fatherland. The goal being to effect Kazy’s Skirpa’s “elimination” of their Jewish minority.

Whether these were isolated incidents or a widespread feature of the mass murder of Jews in Lithuania hasn’t been researched. Even so, we note musical instruments were sought-after items in the distribution of looted Jewish property.

Reviewing documents on the distribution of property looted from murdered Jews in Telšiai, we find two documents dated July 21, 1941, distributing two gramophones to “A. Burokas” and “A. Rimkus” (Lithuanian Central State Archive code LCVA-1075-2-18-153, 1954). This is chilling, considering the Center for the Study of the Genocide and Resistance of Residents of Lithuania [hereinafter Genocide Center] director Arūnas Bubnys’s version of events, claiming the male Jews of Telšiai were murdered at Rainiai on July 20 and July 21, 1941. Their musical instruments were looted and distributed simultaneous with their murder, having been plundered while they were still alive. Clearly, Jews were never intended to survive. Then, the Jewish owned instruments were used to celebrate the murders of their owners.

The Vrublevskiai Library of the Lithuanian Academy of Sciences in Vilnius conserves lists of distribution of property looted from the Jews of Šiauliai. The lists were drawn up in the late fall of 1941. Unfortunately, the lists don’t provide dates for when specific items were distributed to Lithuanian Holocaust profiteers.

The “musical section of the list” includes 14 gramophones, 354 gramophone records, 7 pianos and 1 guitar plundered from their Jewish owners and distributed to ethnic Lithuanians.

We cannot know if the list is complete. There are no violins on the list, nor accordions, only pianos and gramophones. We don’t know how many of these were owned by the Jewish community of Šiauliai. Moreover, the Jews of Šiauliai had already suffered repeated earlier looting by the Soviets.

Soviets targeted a large number of affluent Jews for looting, deportation and repression. Judging by the list of Jewish property acquired, the Šiauliai Jewish community had approximately one piano and two gramophones per thousand residents. This is not a small number. Let’s look at who received these items. Who were their new owners? The names and addresses allow us to form a picture of those for whom the calamities of the Jews gave rise to the desire to make music.

Šiauliai military district commissar, the Nazi Hans Gewecke was also a big music lover. His agency took a piano, a gramophone and 25 records. His agency was apparently more interested in photography, and acquired three cameras.

Railroad Post no. 36357 were lovers of music, acquiring 20 gramophone records, but no gramophone. Maybe they already had one? Jews twisted in death pits certainly no longer needed them.

Šiauliai burgermeister Petras Linkevičius, residing at Basanavičiaus street no. 138, purchased a stolen gramophone for 2 reichmarks along with 34 records for 1.7 reichmarks. They had no compunction about the prior owners. Few did.

Authorized representative for Jewish Affairs – Antanas Stankus – resident at Kapų street no. 17 bought a piano for 25 RM. Šiauliai pro-Nazi insurgency leader and mass murder commander Vytautas Ivanauskas living at Tilžės street no. 160 was highly respected for his work and thus bought a whole piano for the price of one gramophone record, 0.30 RM. Šiauliai deputy police chief Albinas Grėbliūnas also enjoyed a good tune and bought six gramophone records for just 0.30 RM. They all knew that even the still-not-yet-murdered-Jews were soon to be “eliminated”. None would ever need a musical instrument again. They were certain of it. The owners were not coming back.

Napaleonas Jakimavičius, residing at Miglovaros street no. 13 next to military district headquarters, bought a gramophone for 2 RM and spent another 2.45 RM for 49 records. His connections to the Nazi regime aren’t clear: the KGB in their case file on him wrote he used to visit the Sicherheits Dienst headquarters in Aušra alley for unknown reasons (page 24). Police officer Jonas Ščegauskas of Žaliūkų street no. 6 bought a record player for 3 RM. We weren’t able to determine the connections between the other music lovers listed and the Nazi occupational regime, so we won’t bother naming them.

What can we say about the plunder? The gramophone record players were priced between 1.5 and 23 RM. Pianos, (if we exclude the great price given Vytautas Ivanauskas), cost from between 30 and 45 RM, with one brand, Fiedler (pictured), costing more at 50 RM. A guitar went for 1.5 RM. Gramophone records cost around 0.05 RM a piece, although for some reason S. Geležinis bought 15 records for just 0.01 RM apiece.

So much for the musical life of Šiauliai, making music at the edge of the pits filled with twisted Jewish corpses in the Kužiai and Guernija Forests, in Bubiai and Pročiūnai, and the thousands of Jews from Šiauliai murdered that fall.

Every musical concert played in Lithuania should be reminded of their national musical history. Every concert played by Lithuanians outside the country should wonder as to the origin of their instruments and their family musical traditions.

Lithuania continues to honor some of the murderers of the Jews as their current national heroes. None of this is in the past, it is still very current.