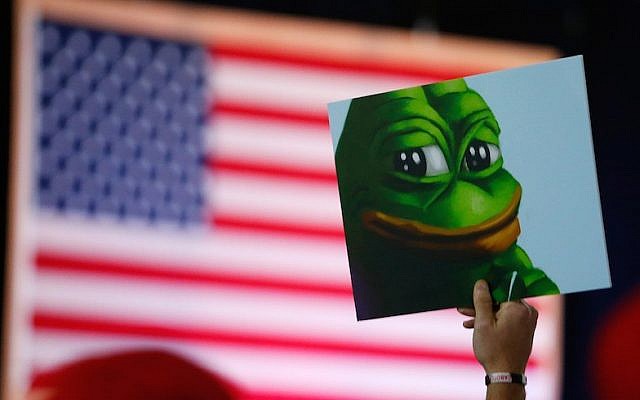 A Donald Trump supporter holds a cartoon designated a hate symbol by the anti-defamation league before the start of a campaign event in Bedford, NH, on Sept. 29, 2016. (Jessica Rinaldi/The Boston Globe via Getty Images)

That kind of verbal irony has become a way of arguing on social media. A Facebook friend complained recently that two weeks after Louis Farrakhan gave yet another anti-Semitic speech, “no one really cares.” In fact, the Farrakhan speech was widely reported in the mainstream media, from The Washington Post to CNN to Fox News to Rolling Stone, especially after a leader of the Women’s March attended the Nation of Islam leader’s speech and refused to acknowledge his hate or apologize. By waiting too long to release a tepid statement on the incident, march leaders kept the story going another week. So did the right, which used Farrakhan’s re-emergence into the public spotlight as an opportunity to bash the left.

You could say people now care about Farrakhan more than they have in 20 years.

I don’t mean to pick on my friend; the “everybody” and “nobody” trope is everywhere these days. In part it is a symptom of news overload — important things that demand attention disappear at the speed of a tweet about some other thing that demands immediate attention. Everybody knows that Trump is adept at changing the subject, and almost nobody knows how to resist the bait. And while the web has democratized news and made it theoretically easier to get a story out to the public, it also means that many more stories and ideas are jockeying for attention.

Bill Moyers does an annual survey of “Overlooked, Under-Reported and Ignored Stories.” Last year’s list included the growing movement for Medicare for All, US airstrikes against ISIS in Iraq and the impact of Trump’s policies — not his tweets, not his scandals — on American society. Last week, on the radio show “On The Media,” social media monitor Thalia Beaty spoke about how hard it is to get attention for the Syrian government’s vicious siege of the Damascus suburb of eastern Ghouta.

“It just doesn’t seem that media outlets know how to tell this story of human suffering without a geopolitical angle,” she said.

But usually when people say that “nobody is talking about something,” they mean “not enough people are talking about a story the way I want them to talk about it.” That could mean that The New York Times or CNN hasn’t put the story on the front page or at the top of the hour. Or that legislators have sent the issue to the back burner. Or that activists are focused on X when they should be focused on Y.

Jewish activists and media professionals seemed to do a “Freaky Friday” switch over the weekend when The New York Times published an essay by one of its editors charging that American Jewish leaders have done too little to call out the troubling anti-Semitism of the past two years. Jonathan Weisman, who was a target of “alt-right” anti-Semites during the 2016 campaign, has written a book called “(((Semitism))): Being Jewish in America in the Age of Trump.” In Sunday’s essay, he claimed the American Jewish Committee, the Jewish Federations of North America and other leading Jewish organizations “have been remarkably quiet” on the rise of anti-Semitism.

His evidence is rather narrow, having to do with the Anti-Defamation League and its condemnation of two popular alt-right figures for spreading anti-Semitic theories. When Ohio’s Republican state treasurer, Josh Mandel, lashed out at the ADL in defense of the two conspiracy theorists, Weisman wrote, “I did not see any organized effort to rally around the institution, one of the few major Jewish groups in the United States that is still not predominantly engaged in debate over Israel.”

It’s an odd charge. First, the ADL talks plenty about Israel. Second, if the Jewish community were a government, the ADL would be its Department of Defense, AJC would be its Department of State and JFNA would be the IRS. That’s not to say that their missions don’t frequently overlap, but the ADL is usually deferred to when it comes to anti-anti-Semitism. The AJC does a lot of work on anti-Semitism, but mainly in Europe. The JFNA is a fundraising trade group that generally avoids made-for-Twitter issues like the ADL-Mandel ruckus.

But coming after a period that included Charlottesville, the JCC bombings and a general feeling of disquiet following the 2016 campaign and the rise of  the alt-right, it’s just weird to conclude that Jewish organizations are ignoring or downplaying anti-Semitism. The ADL certainly has been loud and consistent in calling it out in the past 16 months, joined frequently by the American Jewish Committee, Simon Wiesenthal Center, U.S. Holocaust Memorial Museum and, ahem, the Jewish media.

Weisman only gets it partly right when he talks about how “partisanship” has distorted the internal Jewish debate on anti-Semitism. Partisanship hasn’t silenced or cowed the ADL or left it isolated, as he suggests. But it has made it harder for Jews to agree on what constitutes the greatest anti-Semitic threat of the moment. Right-wing critics say the ADL goes after the alt-right in order to tarnish Trump. They accuse the ADL of ignoring left-wing anti-Semitism as represented by the Boycott Israel movement, which the ADL also consistently and assertively condemns. The Jewish left, meanwhile, says the Jewish establishment spends too much time vilifying domestic critics of Israel and should really be focused on the rise of white nationalism.

That’s certainly how the Farrakhan debate is playing out. The right has raised Farrakhan’s anti-Semitism as a symbol of all that plagues the left. And the left insists that the right’s focus on Farrakhan is meant to deflect from its own coddling of white nationalists and other hatemongers.