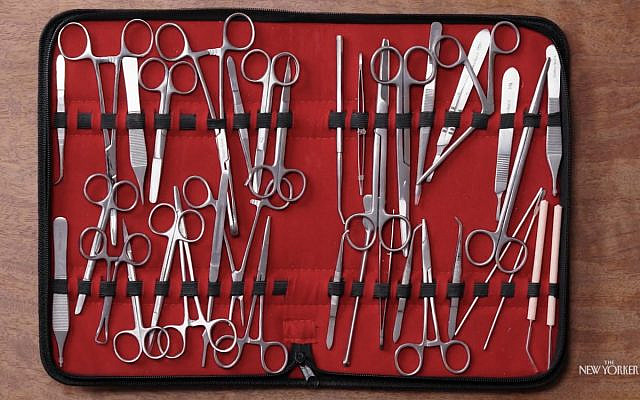 The New Yorker is at it again. After running Gary Shteyngart’s botched circumcision piece last October, they just published an animated short entitled Dear Max: Contemplating Circumcision. Described as a documentary where Alex Kahn weighs Brit Milah against his concerns as a parent, the film attempts to be more balanced, but, like Shteyngart’s article, has many inaccuracies that warrant comment.

The film begins in the right place. It is not at all shocking that parents in our day and age question everything. Such inquires as, ‘why are we doing this?’ or ‘is this the right thing to do?’ are natural reactions to a Brit Milah. In fact, I’d be more surprised if parents felt no reservations when their newborn undergoes the rite. But it feels as if Kahn simply made a list of pros and cons with very little research and never went any further. Deep questions such as these require serious investigation.

A word casually tossed out in the context of this film is “mutilation”. The term appears in the section discussing how Brit Milah went against the director’s intellect. These ideas were followed up by the charge of barbarism. It seems that these notions always go hand in hand. The ethical attacks on Brit Milah, as in this film, are not substantiated. But there are ways to defend this ritual from both a religious and ethical standpoint.

One of the strongest defenses of Brit Milah is something that the director tries to undermine in passing. He claims, as many opponents of circumcision do, that the medical benefits are ambiguous at best. But that’s not at all true.

Research on the matter has shown that “[The] benefits exceeded procedural risks, which are predominantly minor, by up to 200 to 1. We estimated that more than 1 in 2 uncircumcised males will experience an adverse foreskin-related medical condition over their lifetime.”

In addition, the foreskin has been shown to cause Urinary Tract Infections in newborns. That may seem trivial, but UTI’s are the leading cause of Sepsis, which kills 7,000 babies a year in the United States alone. Those are just a few examples. There are numerous proven medical benefits of circumcision.

“I’m so sorry that I brought pain on you and your mom.” Kahn is far from the first person to feel or express such a sentiment. This idea is often uttered at a Brit Shalom, a replacement for Brit Milah which doesn’t involve cutting. Parents at these ceremonies state things like, “You’ll never experience pain at my hands”. This is a preposterous notion. If one were to try to uphold this value you’d never vaccinate your children or send them to school, for that matter.

Pain is a part of life and of parenting, and that is one of the messages of Brit Milah. Rabbi David Bar-Hayim, when speaking on the issue asks, why would anyone cause a child any suffering? And when viewed at the local level it doesn’t make any sense why we continue this practice. But when we zoom out, and look at the arc of Jewish history and nationhood, recognizing that Brit Milah is one of the keys to our survival, then the momentary pain seems trivial. In a way, it’s akin to a vaccination. We know the momentary pain is for a much greater good – protecting the child’s life. Brit Milah is also a momentary pain to protect the life of the Jewish people.

Kahn makes reference to “a growing movement that advocates preserving this sanctity of the male body”. There couldn’t be anything less Jewish than this. The debate is an ancient one. Rabbi Akiva debated this notion with Turnus Rufus in his day. The Roman ruler asked the question that most anti-circumcsionists still do: if God had intended us to remove our foreskin, then why are we born with it? Rabbi Akiva responds by saying, which offering is better to give to God, wheat or a loaf of bread? The answer, of course, is the bread because it shows that you’ve worked to improve the gifts God has bestowed on us.

But Rabbi Akiva is saying much more than this. His claim is one that Kahn should pay special attention to. The director’s takeaway from giving his son a Brit Milah was stated as such, “And I came away that day having learned something important, which is the same thing that I hope that you learn when you’re old enough to watch this. Which is that choices, just like identities, are what you make of them.”

Judaism and being part of our nation is so much more than that. A Brit Milah symbolizes our unique relationship with God. A covenant, if you will. But that doesn’t only mean that we are connected to a 5,000-year-old tradition dating back to Abraham. That is certainly something. But this covenant is an active relationship. Rabbi Akiva was proposing that our job in this world is to improve it, to fix what’s broken. It’s not enough for us to give back the gift God gave us as we received it. We have to make both ourselves, and the world around us reflect God, and that means helping it reach the highest moral level.

Yes, it’s true, all of this is bound up in a small piece of skin. But that is why so many of our ancestors died to keep this ritual alive. It’s not just our membership card, it’s our calling card. And that’s nothing to scoff at.