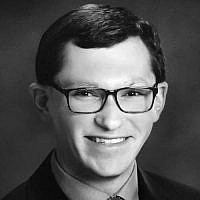 The Blogs
Sam Arnold
Apply for a Blog
Advertisement
Please note that the posts on The Blogs are contributed by third parties. The opinions, facts and any media content in them are presented solely by the authors, and neither The Times of Israel nor its partners assume any responsibility for them. Please contact us in case of abuse. In case of abuse,
Report this post.

When I first came to Kalamazoo and interviewed to be a part of the OKCJS Religious School, something that I was really excited about (and still am) that I learned that day was that the religious school was combined between both Temple B’nai Israel and here, Congregation of Moses. I had worked in previous religious school before, both being Conservative Shuls. However, something unique that I had never seen in action was a religious school partnership between both a Conservative and Reform Shul. Where I am from in the metro Detroit area, there are a few Shuls that are a combined reform and conservative shul, however, they don’t have a religious school. Therefore, here in Kalamazoo, I am proud to say, would be the first.

Over time, however, I learned that there was this thing going on called infighting. What this means is that between both here and TBI, I learned there were conflicts arising around different topics like Kashrut (keeping Kosher), What is davened or worshiped during Services, and even if one should be required to wear a Kippah (a head-covering) or not. Regardless of the Shul it was in, I still remember to this day hearing the familiar stories of children being scorned for not wearing Kippot, being able to follow along during services respectfully, or even not being able to be quiet while prayers were being said or Torah being read.

With all of this being said, I am challenged to question:  What does it take to build a space, a sanctuary space like this one for that matter, so that the Kadosh Baruch Hu  can dwell among us and there not be the continuous in-fighting and lack of respect towards one another?

In our Parshah, Parshat T’rumah, we read of Moses being instructed by G-D to collect gifts from the Israelites so that (as we just sang), G-D can “Veshachanti Betocham” (Shemot 25:8), dwell among them. The Torah states: “The Lord spoke to Moses, saying: “Tell the Israelite people to bring Me gifts; you shall accept gifts for Me from every person whose heart so moves him” (25: 1-2). This command is then immediately followed by the gifts that Moses should accept: “Gold, Silver and Copper; blue, purple, and crimson yarns, fine linen, goats’ hair, tanned ram skins, dolphin skins, and acacia wood; oil for lighting, spices for the anointing oil” (25: 3-6) and more.

First, what is fascinating about all of these gifts is that they were originally someone’s and shared with the rest of the community. The word, T’rumah, means to elevate. Therefore, it makes sense that these gifts were meant to be used for holy and transcendent purposes. For example, as we learn in our Parshah, the oil that one gifted was then used to light the seven branched Menorah to bring light into the darkness. These gifts were bringing the Israelites’ closer to Hashem, and that is powerful!

What else is interesting though is that the Torah uses the verb, V’Yikhum, bring, which translates to the word “take.” Therefore, what does this teach one about giving? It turns out that when one gives, they also are gaining something in return. Maybe it is the sense of self worth and the knowing that something of value could be given away without diminishing one’s identity or even the sense of being generous. Our Torah commentators, though, take this a step further and make it clear that while might gain more self with or generosity, it is actually the sense of sharing with others that one should walk away with.

For the purpose of this community, the CoM community, I question: What are gifts that we can share with both our TBI and broader Kalamazoo community? Is it the love of being the one and only Conservative Shul in Kalamazoo? Is it being able to show others the Kosher Kitchen and how we cook and eat? Is it how we go about Social Justice and balance it off with Ritual? Or even is it the kindness we have for others? In similar ways, Temple B’nai Israel and elsewhere can be asking themselves maybe not the same, but definitely similar questions.

Regardless, though, these gifts that each community can bring have purpose, not only for those who call that community home, but also for those who are the guests as well.

You might be wondering why I am talking about this topic of sharing gifts and strengthening sanctuary specifically this morning. The reason being is because we are living in pivotal times. Antisemitism continues to be on the rise and our Jewish world is divided. Arguments around the Kotel (specifically around making an Egalitarian section) and who is considered Jewish in both Israel and elsewhere are dividing us as a people. At the same time, there have been comments made this week about the Holocaust and what books (specifically Jewish ones) as well that are making Jews question not only their identity as Jews, but also to make the choice not to be Jewish anymore.

Therefore, I feel empowered to call out: enough is enough! We have too much hatred among the Jewish world and elsewhere, and we do not need anymore. Therefore, I challenge all of us to think: What can we do to build bridges as a Kalamazoo Jewish community to get along?

One great way that this is already happening is the Book Club. The Jewish community, on a monthly basis, is coming together to read and talk about a book. At the same time, we have had classes on Women in the Rabbinate that have happened where both Rabbi Estrin and Rabbi Schicker have taught classes. However, there is more that we can do. Maybe it is a weekly (non-Shabbat) Torah study or just having a socially distanced lunch together where conversation can flourish. At the same time, maybe even bringing the youth outside of religious school together! Regardless, damage has been done by both sides, and the ties need to be put back together so that this Jewish community can be strong.

I understand that both us here at COM and those at TBI, let alone the broader Kalamazoo community, will not necessarily see eye to eye on the same things. But, as we know, when you put two Jews in a room, you get three opinions. Therefore, what is the best way to start this transformation of sharing gifts? Put the past behind and start fresh. Go off of the similarity that we are all Jewish and build from there. It is not easy to do and it does take much patience and time. However, the end result can be beautiful if we are willing to put in the energy.

When the Israelites had to bring gifts to build the Mishkan, the Sanctuary, it was not just one person who contributed, but everyone. Our Torah portion tells us that G-D is not just in a building, but also in the hearts and souls of all of us. Therefore, in this, the CoM community, we have the possibility to emulate this idea if we allow all to share their gifts, regardless if they are a part of this community or not, with us.

This Shabbat, may we be inspired to, just like the Israelites did when building the Tabernacle, open our eyes to the gifts that each one of us in this community and elsewhere can bring, so that it can strengthen not only this, the CoM community, but also the Kalamazoo Jewish and broader community as well. At the same time, may we work together as the CoM community to keep strengthening this congregation so that it can continue its’ purpose of bringing Conservative Judaism to Kalamazoo today, tomorrow and for generations to come.

About the Author
Sam Arnold is a Junior at Western Michigan University majoring in Early Childhood/Elementary Education and minoring in Comparative Religions, with the goal to receive a master's in Jewish Education and pursue the Rabbinate. He is the 1st and 2nd Grade Teacher, Co High School Teacher, and the K-3 Team leader within the joint Religious School of Congregation of Moses and Temple B'nai Israel in Kalamazoo MI, and serves as President for Western Michigan's Hillel. Sam is a part of the first-ever NEWCAJE College Cohort, a Hadar Davening College Fellow, and has studied underneath Cantor Leonard Gutman of Congregation Shaarey Zedek learning and gaining respect for the art of Davening. Finally, Sam looks to inspire others to live their lives filled with passion, joy, and meaning, just as he is on a daily basis!
Related Topics
Related Posts
Comments