In the House of Lords debate on June 11, 1922, as Lord Stanley Owen Buckmaster phrased it, the subject at hand was whether the Balfour Declaration had “violate[d[ the pledges that we gave to the native races.” Indeed, John Poynder Dickson-Poynder, Lord Islington, who had moved the motion, and who the JTA had described a year later as “a well-known anti-Zionist”, phrased the question of the day that “the Mandate for Palestine in its present form is inacceptable to this House” due to violated pledges.

Responding in that same debate Lord Balfour said, inter alia, the he does not

“…deny that this is an adventure…Are we never to try new experiments? I hope that your lordships will never sink to that unimaginative depth, and that experiment and adventure will be justified if there is any case or cause for this justification.”

Arie M. Dubnov, contemplating those same words of Balfour, came to an entirely different understanding of them and wrote:

“British policy in Palestine, in other words, was not about independent nation-state building, or even an attempt to come up with a ‘solution’ to the ‘Jewish Question’. Instead, it was the continuation of nineteenth century imperial adventurism by new means, a political experiment.”

How he could arrive at that conclusion when Balfour stated that day that the Mandate for Palestine is not “inconsistent with the policy of the Powers who invented the mandatory system”, a system that had “always contemplated the Mandate for Palestine on the general lines of the Declaration of November, 1917” is unfathomable. That Declaration, Balfour forthrightly stated, proposed a “policy of a Jewish Home”. Dubnov’s suggestion is not only an indication of a purposeful misreading of the speech, but a dastard corruption of history. 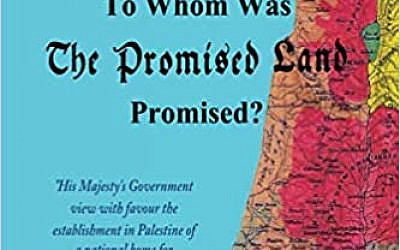 I introduce Professor Sion’s book on this backdrop as an indication just how important the subject is with what he deals. His subtitle is “Some Fundamental Truths About the Arab-Israeli Conflict”. Sion is a legal scholar and his book is an essential contribution to the growing literature challenging the pro-“Palestinian” forces asserting that Zionism and, as that Balfour Declaration phrased it, the reconstitution of the Jewish national home due to the Jewish people’s historic connection to that land is somehow illegal.

Already in 1971, as footnoted in Sahar Huneidi’s article on the Middle East Department of the Foreign Office, Dennis Edward Knox’s Ph.D. dissertation, “The Development of British Policy in Palestine, 1917-1925”, suggested that when the Mandate came into force in September 1923, Balfour Declaration, which had been a political letter of intent, acquired a legal status.

As I myself have pointed out, already in 1936, W. F. Boustany published a tract claiming the Palestine Mandate was invalid as did Tawfiq Canaan that same year in his “Conflict in the Land of Peace”. Much latter, Henry Cattan further developed this approach which includes negating Jews as a nation, with no rights, as aliens to the country and so forth. Britain, they claimed, committed an illicit act in advancing Jewish rights in the Land of Israel. Canaan, however, admitted that “the Arabs of Palestine…constituted at the time of the Turks the southern part of Syria” thereby casting much doubt if there ever was a unique Arab Palestinian entity and whether their legal standing could in any way compete with the Jews. Even in 1938 George Antonius used the term Syria to describe the entire Bilad al-Sham region of which “Palestine” was but Southern Syria, casting doubt on “Arab Palestine” as a legal concept altogether.

Sion has been preceded by Howard Grief and Jacques Gauthier and multiple articles and studies. What, then, is the advantage of reading Sion’s book?

Sion is concerned with two main issues. The first, is Jewish settlement activity in Judea and Samaria illegal, in violation of international law? Second, is it a war crime? To arrive at a conclusion, he reviews the material at hand – not the imagined legal opinions of recent years or UN decisions but what the parties involved intended, how they intended that the Zionist project be constructed according to international law norms and the historical frame of reference for this.

His goal is well accomplished, providing the interested reader with details and little-known facts in a comprehensive manner but without belaboring the reader or making him feel as if he is a law school classroom. The volume is an excellent resource aid to counter Arab propaganda, whether advanced by Arabs, pro-Palestine agitprop agents or progressive anti-Zionist Jews.

An example: on p. 149, he quotes Lord Curzon, unsympathetic to Zionism, who said at the 1920 San Remo Conference that it was important “to safeguard the rights of minorities, first, the right of the Arabs”. As we all know, Arabs were not the minority in Palestine at that time. The conclusion must be that, contemplating a Jewish state, and with the vast numbers of Jews coming to the country, the Arabs would become a minority. This invalidates the use by Arabs of the principle of self-determination. The Mandate was specifically designed to increase the Jewish population, the object of 500 years of Ottoman oppression, as well as Moslem suppression in centuries past as Jews were the natural and indigent people of the Land of Israel.

Admittedly a personal interest of mine, but Sion decided not to include any of Ze’ev Jabotinsky’s thinking on this issue. For example, in his official testimony before the Peel Commission, Jabotinsky made the point that Sir Edward Grey, Great Britain’s Foreign Secretary, cabled to Sir George Buchanan, the British Ambassador in St. Petersburg on March 13th, 1916 asking him to enquire what would be the Russian Government’s attitude to a pro-Zionist declaration. Grey’s formulation of what Jabotinsky termed ‘Jewish Zionist aspirations’ was “the scheme should foreshadow authorising the Jews, when their colonists in Palestine become strong, enough to compete with the Arab population, to take into their hands the administration of the inner affairs of that region (except Jerusalem and the Holy Places).” Sion does not include that communication although Grey is quoted several times.

Sion, in private correspondence, claimed that his research is based on official documents and Jabotinsky is barely included in those papers and when he is, the nature is not complimentary. I would think that Jabotinsky was at the center of the 1916-1917 political and diplomatic efforts of a small band of Zionist that both achieved that Balfour Declaration and also the formation of the Jewish Legion units, quite a formable task. In quoting Grey’s words, which were in the official documentation, he was doing so as a participant in the events. In 1937, Jabotinsky reminded British officialdom and we today that England’s intention was to create, legally and justifiably, a Jewish geopolitical entity two years before the Balfour Declaration was issued.

Jabotinsky, in that 1937 testimony, also reminds the Peel Commission that “just before the Balfour Declaration was published, in 1917, there was a polemic in the ‘Times’ between members of the Zionist and the anti-Zionist sections of the British Jewish community. Lord Rothschild published his formula of the ‘Jewish Zionist aspirations’ in the ‘Times’ of May 28th, 1917: ‘We Zionists [seek] the establishment of an autonomous Jewish commonwealth under the aegis and protection of the Allied Powers’”. Sion does mention that letter on page 105 but his source is the Leonard Stein’s 1961 book, published a quarter of a century after Jabotinsky’s very public and very official testimony regarding those same words.

I choose one more of Jabotinsky’s text before the Commission when he quotes another proof “that the declaration was a promise to facilitate the creation of a Jewish State with a Jewish majority. He recalls Captain Hopkin Morris, speaking the House of Commons on November 17, 1930 of a ‘promise’. In that speech he said, “The Balfour Declaration was made in 1917, and it…promised a national home for the Jews on the one hand, subject to the civil and religious rights of the existing non-Jewish population on the other…There is no question at all that, after the Declaration was made in 1917, the Zionists were led to believe that they were to have established in Palestine a Jewish State. I have carefully looked up the speeches and the articles written by the late Lord Balfour…you cannot say that any part of his writings or speeches contains anything in the nature of a promise of a Jewish State…All the national leaders were talking of a Jewish State.” This, too, I did not find in Sion’s book.

I think these examples should have been included. But their absence does not affect the book’s important value for those who know little – or refuse to acknowledge – that history.

One more thing that, perhaps, could have been included is a map of the Zionist proposal for the borders of the Mandate that was presented at the January 1919 Versailles Peace Treaty, the same time Weizmann met Faisal. Sion’s book has seven maps, four dedicated to the biblical boundaries of the Land of Israel. The 1919 map, besides its contours, extending up to the Litani and across the Jordan River to the Hejaz River, is important because it attests to the knowledge the nations of the world had as to Zionist territorial aspirations.

Sion dedicates his work to the question of whether the Arabs had any claim to self-determination in the territory of Palestine and highlights the apparent contradiction between the fact that Jewish settlement anywhere in the territory of Palestine was an obvious right (Art. 6 of the League of Nations 1922 decision), one that would “encourage close settlement by Jews, on the land”, and the current charges of “illegal settlements”. He maintains the Mandate clauses take precedence of the Geneva Convention’s Article 49.

Sion’s book brings a new, deep and fresh reading of the circumstances of the diplomatic and legal creation of the Mandate of Palestine, the intentions of those that were involved in its creation, the documents attesting to all that and the implications for understanding the current political situation in Israel and Judea and Samaria. It belongs on your shelf.