Butte, Montana, January 21 – The spiritual leader of the lagamorph community caused an uproar today when he announced that, contrary to popular perception, there is no inherent obligation for adherents to reproduce without restraint, in the manner of Roman Catholics.

Pope Warren XXIII addressed followers during a convocation at a burrow in this pastoral town, telling them that it is possible to remain a faithful, good Rabbit even if one seeks to limit the number of kittens one brings into the world. While Warren’s message fell on long, welcoming ears, some traditionalists bristled at the common language in which the pope chose to express it.

“I appreciate that Pope Warren has given us what many would consider a new interpretation of ecclesiastical law,” said Bishop Buck Cottontail of the White Harvey diocese, a known conservative. “Churchbunnies may differ as to the extent to which human reproduction as part of marriage is a value on which we must, as a species, not compromise. But what I feel I and my colleagues cannot countenance is the lowly terminology with which the Holy Father seems to have issued his statement.” 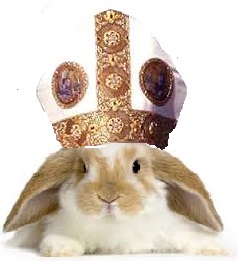 “It would have been just fine to say something like, ‘We Rabbits hold as sacred the practice of breeding, but there is no inherent obligation to engage in it without limits,’ and the message would have gotten across just fine,” concurred Archbishop Flopsy of the Oswald diocese. “There was no need to indulge in what many in our community would hear as vulgar terminology.”

But many adherents welcomed the change in tone. “It’s abut time we had a leader who speaks the language of his colony,” gushed Mopsy Buggs, a lay leader in her MacGreggor Farms congregation. “There’s nothing sacred about a mode of speaking that no one uses anymore unless they want to sound aloof. I’d bet my lucky foot this helps stem the tide of young Rabbits leaving the colony.”

This marks the second time in a year tat Warren has courted controversy. Last March he suggested that defeat of the Fudd might not be necessary, a position that shocked adherents who had always been taught there was no room for compromise in that existential struggle.