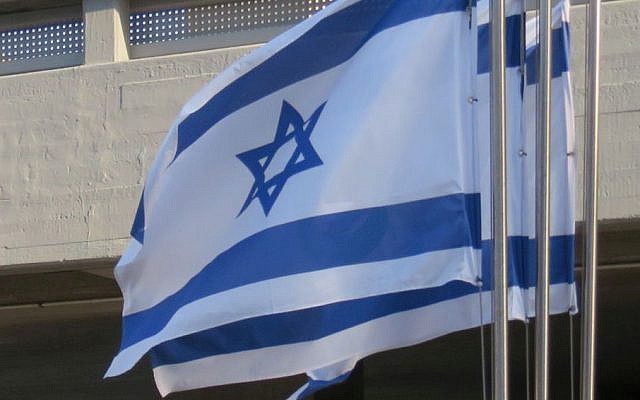 Israeli flags at a memorial for Yitzhak Rabin in Tel Aviv.

Gayle De Haas, who describes herself as “a field archaeologist who has worked extensively in Israel,” starts her open letter to me by claiming that she is “not someone who makes it her life’s mission to bring others down,” so I start by thanking her for making an exception with me.

De Haas’s letter makes several blatantly false claims, and consequently, I felt the need to set the record straight. Also, unlike Lebanese president Michel Aoun who never replied to my open letter challenging him to make peace with Israel, I want to demonstrate traditional Lebanese courtesy.

De Haas wrote, “He himself admits he shifts his opinion on Israel (ie one state/two states) quite frequently”. I did no such thing. What I said is, “I have long supported a two-state solution for the Israel-Palestinian conflict, but in the last couple of years, I went through a period of doubt”. How this translates to changing one’s opinion “quite frequently”, I do not know.

De Haas takes exception with me quoting Golda Meir, but several times in her letter, she laments that I did not quote Yasser Arafat and other “‘Palestinian’ “founding fathers””. I guess she is not aware that Arafat is notorious for lying and saying one thing in Arabic and another in English, and that therefore no self-respecting author would ever rely on what he says. She also must not be aware that Golda Meir, on the other hand, is a hugely respected figure who chose her words carefully. I respect Meir, a leader who made her people proud, even if I disagree with one particular statement that she made, and I do not respect Arafat, someone who has enriched himself on the back of the Palestinian people while doing more than anyone else to destroy their cause; clearly, I must be a monster.

De Haas takes issue with the fact that I refer to Israel/Palestine as both Jewish land and Palestinian land. She claims that “feeding into the narrative that ‘Palestinians’ are one people who have an ancestral link to “their land” does nothing to defuse the situation”. Maybe she should address her open letter to Yossi Klein Halevi, a Jewish Israeli and author of “Like Dreamers” (named the 2013 National Jewish Book Council Book of the Year), who has on several occasions acknowledged that the land belongs to both peoples, and that they are indeed two peoples. In one instance, for example, he wrote, “this land belongs to two peoples […] this is a conflict between two legitimate narratives”. He also makes similar statements in his highly acclaimed book “Letters to My Palestinian Neighbor”. I guess that De Haas would prefer that I learn history from Arafat rather than from Klein Halevi.

De Haas asserts that Palestinian nationalism has “nothing to do with a love for their homeland but rather the desire to obliterate the Jews”. I have denounced a number of times the opposition of Palestinian and Arab leaders to the Jewish state to the detriment of the quest for a Palestinian state. However, to claim that hatred of the Jews is all there is to Palestinian nationalism demonstrates a total lack of understanding of real Palestinians. I suggest to De Haas that she should speak with individual Palestinians such as Mohammed Dajani Daoudi and others who wrote to Yossi Klein Halevi in response to his “Letters to My Palestinian Neighbor”, rather than rely on the bigoted assumption that all Palestinians are extremists blinded by antisemitism.

De Haas claims, “Maroun seems to be very out of touch with history and the political reality of why we are where we are today and what can be done”. With regard to understanding history, I have already demonstrated that De Haas is the one who is out of touch with well-respected Israeli thinkers. The second part of her sentence is just as inaccurate. In the very article that she responded to, I said, “Such a development [Palestinian statehood], however, will not occur as long as Palestinian terrorists have the upper hand within Palestinian society. Israel will not leave the West Bank in the hands of Palestinians if it means the risk of having a second and much larger base for Hamas or perhaps even ISIS next to the heart of Israel. If the Palestinians want self-determination, they will have to abandon terrorism”. If this is not a fair and realistic recognition of the current situation, as Klein Halevi and practically all mainstream Israeli analysts recognize it, then I do not know what is.

De Haas laments what she perceives as my bias, but much of her rhetoric, including her consistent use of the word Palestinian in quotes indicates that she espouses an extreme anti-Palestinian ideology that does not even recognize that Palestinians are a legitimate people. I recognize and support both Jewish nationalism and Palestinian nationalism, and I urge both sides to do what is necessary to come to a mutual agreement on how to reconcile the two nationalisms. If this makes me biased, then I plead guilty, your honor.