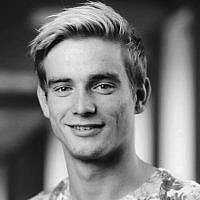 The Blogs
Rob Young
Apply for a Blog
Please note that the posts on The Blogs are contributed by third parties. The opinions, facts and any media content in them are presented solely by the authors, and neither The Times of Israel nor its partners assume any responsibility for them. Please contact us in case of abuse. In case of abuse,
Report this post.

As Vice President of Society and Citizenship I’ve led on a piece of work that has seen the National Union of Students’ (NUS) team up with the Union of Jewish Students to look at the experiences of Jewish students on campus.

This report is a response to increasing anti-Semitism across the UK: The Community Security Trust (CST), who monitor anti-Semitism in the UK, recorded 1,309 anti-Semitic incidents in 2016, the highest total it has ever recorded.

The report is also a response to Jewish students who are increasingly telling us that they feel uncomfortable engaging not only with student politics and NUS, but also with their students’ unions and university communities.

As an organisation that is committed to tackling racism and fascism, addressing this is imperative.

Higher education should be here for all students and we need to make sure that all students can engage with us without feeling discriminated against.

I want Jewish students to know that we are committed to ensuring that this includes them.

The research brought to light a few things that came as a surprise to me.

For example, one student reported that “I found out one of my lecturers, for whom I was supposed to write an essay, has written an article in favour of Holocaust revisionism for a notoriously anti-Semitic magazine”.

I was also surprised to find that 42% of students had no access to kosher food on or near their campuses.

What came across most strongly though was less of a surprise: that debate around Israel/Palestine can often leave Jewish students feeling isolated and excluded.

54% of those surveyed disagreed or strongly disagreed that they would feel comfortable engaging in debate about Israel/Palestine.

Given the fact that this is an issue which is highly emotive for many in the student movement, and is often discussed in our unions, as well as by academics, it is no wonder that Jewish students find it hard to engage in these environments.

So what’s the resolution?

It is not to shut down debate around Israel/Palestine.

Universities, as we are often reminded, should be places where free and open debate is encouraged.

If students feel passionately about a political issue, then they should be supported to discuss it.

Of course, many Jewish students also hold strong, often deeply personal, views on the Israel/Palestine debate and would like to be given a chance to discuss these.

The problem, as we have seen in this report, is that they feel that they cannot engage in this particular debate without being subjected to anti-Semitic language and views.

This has to change, and it can only change if we listen to the experiences of Jewish students.

There is currently so little understanding across much of society of where debate around Israel Palestine slides into anti-Semitism.

We know, for example, that while the intentions of those with pro-Palestine views are usually not anti-Semitic, the rhetoric they use often can be.

I want NUS and others to engage with the Jewish community to identify the ways in which the debate can become anti-Semitic and produce clear guidelines to be adopted across the student movement.

Only when discrimination and racism in all forms is eradicated can we have truly free debate.

Only when Jewish students feel able to engage with every single aspect of student life without fear of prejudice will anti-Semitism no longer be an urgent problem for our movement.