“Ramadan Mabruk” I told Machumd, our Muslim doorman, as I left the house this morning.

“No, no,” he replied, “it was postponed to Thursday because there was no moon sighting in Saudi Arabia.”

“The law is,” he continued, “that the new month is only set in motion once the religious authorities have formally consecrated it. If they don’t see the new moon, the consecration ritual is postponed to the next day, delaying for one day the start of Ramadan.”

If I did not know otherwise, I would have thought that he got all this from the Mishnayot in tractate Rosh HaShanah, not from the Hadith. That is exactly how we did things before we switched to an established calendar.

The exchange was a glimmer of light in a world filled with darkness. Beneath the bloodshed lies a deep historical and spiritual commonality. בני אב אחד אנחנו, we’re both descendants of Avraham, worship the same God, and employ overlapping rituals in an attempt to bring sacredness into our lives.

One can’t help think of Dan Pagis’ sparse but evocative poem, in which he invokes the brotherhood of mankind while experiencing the horrors of the Holocaust. 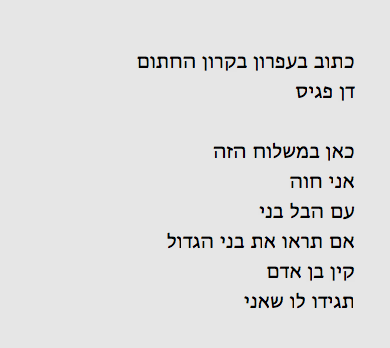 Written in Pencil in the Sealed Railway-Car
By: Dan Pagis