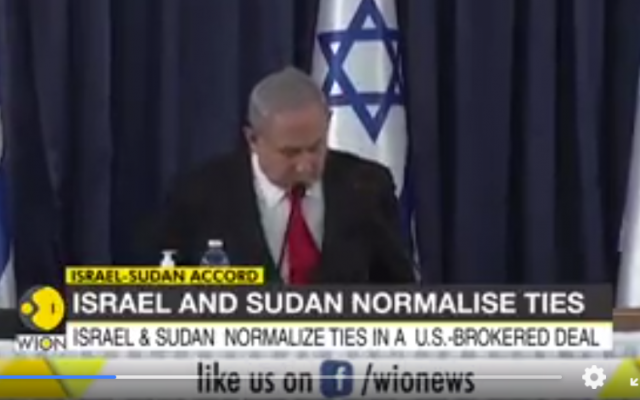 Sudan is the exception to the rule in the United Arab Emirates’ counterrevolutionary playbook.

In contrast to Egypt or Yemen, where it went out of its way to help roll back the achievements of popular revolts, the UAE was happy to see the back of Sudanese President Omar Al-Bashir.

Mr. Al-Bashir was toppled in April 2019 by the country’s military as mass anti-government protests demanded regime change. The military ensured that the transitional power-sharing arrangement that was negotiated with political and civil society groups was slanted in its favour.

The UAE and the United States agreed at the time that it was time for Mr. Al-Bashir to go. But they likely disagreed about what should succeed him. The United States pushed for transition to a civilian-led democracy. UAE leaders have repeatedly dismissed democracy as a suitable model of governance.

That hasn’t stopped the Biden administration, which suspended US$700 million in aid to Sudan in the wake of last week’s coup, from relying on the UAE to pressure the country’s military leaders to restore the transitional structure. In response, the UAE is believed to have persuaded the military to release deposed prime minister Abdullah Hamdok, who initially had been detained by the putschists.

“We’re really focused on engaging the Emiratis, who have a relationship with General Burhan, to use that engagement — to use their credibility with General Burhan — to, in the short term, get those who were picked up” released, a US official said. He was referring to Abdel Fattah al-Burhan, the commander-in-chief of the Sudanese military who grabbed power last week.

Saudi Arabia and the UAE, mollified by Mr. Al-Bashir’s dispatch of thousands of Sudanese soldiers to bolster the Gulf states’ intervention in Yemen, long supported his regime with investments and financial support worth billions of dollars. Yet, they increasingly resented Mr. Al-Bashir’s failure to act on promises to break with his Islamist support base and its backers, Turkey and Qatar.

The president’s determination to straddle the fence became an even greater irritant after the UAE, Saudi Arabia, and Egypt as well as Bahrain in 2017 declared an economic and diplomatic boycott of Qatar because of its alleged support for Islamists.

Mr. Al-Bashir’s refusal to play ball led the UAE to halt fuel supplies and financial aid to Sudan in 2019, which in turn worsened the economic crisis that was fuelling the mass anti-government protests.

The cut-off was the Gulf state’s first step towards supporting regime change even if it favoured a replacement controlled by the military rather than political groups and politicians.

That is likely one major reason why the UAE, as well as Egypt, have so far stopped short of condemning last week’s military coup that eliminated Mr. Hamdok’s civilian component of the transitional governance structure. As an ardent opponent of UAE-supported Sudanese military dominance in key sectors of the economy, Mr. Hamdok was a thorn in the side of the armed forces.

The Emirati foreign ministry stressed in a statement in the wake of the coup “the need to preserve the political and economic gains that have been achieved… It is keen to see stability as soon as possible in a manner that achieves the interests and aspirations of the Sudanese people in development and prosperity,” the official WAM news agency reported.

Those aspirations are, in the UAE’s mind, represented by Generals Al-Burhan and General Mohamed ‘Hemdeti’ Hamdan Dagalo, the head of the notorious Rapid Support Forces (RSF) with long-standing ties to the UAE and Saudi Arabia. The two men have successfully projected themselves as anti-Islamist bulwarks.

The Emiratis signalled early on their support for the toppling of Mr. Al-Bashir in contacts in 2019 with elements of the opposition and armed forces at a moment that the military and paramilitary were mulling the removal of the president in a power grab. UAE officials assumed that the military and the RSF would emerge as the dominant force in a new Sudan.

Then Sudanese intelligence chief Salah Gosh visited imprisoned opponents of Mr. Al-Bashir at about the same time to solicit their support for a military-managed change. Mr. Gosh reportedly told the jailed leaders that he had just come from Abu Dhabi where he was assured that the UAE would support the removal of Mr. Al-Bashir by restarting fuel deliveries and offering financial aid to a new government.

Mr. Al-Bashir rejected a UAE-backed face-saving resolution of the crisis that would have allowed him to stay in power for a transitional period that would be followed by elections. The deal would have required the president to surrender the leadership of his National Congress Party and not to seek re-election.

The armed forces and the RSF have profited from the deployment of military personnel to fight alongside Emirati- and Saudi-backed forces in Libya and Yemen, where the Sudanese account for a majority of the anti-Houthi alliance’s ground troops.

UAE Deputy Prime Minister Sheikh Mansour bin Zayed Al Nahyan, a brother of crown prince and strongman Mohammed bin Zayed and the owner of Manchester City, sought, in the immediate aftermath of Mr. Al-Bashir’s deposal to marshal the support of opposition and rebel groups for the takeover.

Sheikh Mansour was allegedly helped in the background by Abu Dhabi-based General Abdelghaffar al-Sharif, the former head of Sudanese intelligence, according to Sudanese sources.

UAE policy quickly shifted to furthering Emirati interests irrespective of how that might impact Sudan’s political stability and economic development. One immediate goal was to facilitate Sudan’s recognition of Israel in the footsteps of the UAE’s groundbreaking establishment of diplomatic relations with the Jewish state even if much of the political elite and significant segments of the public were opposed.

UAE facilitation also served to widen the gap between the military and civil wings of Sudan’s transitional governance structure. The UAE arranged for a secret meeting in Uganda in February 2020 between General and then Prime Minister Binyamin Netanyahu without the involvement of his Sudanese counterpart,  Mr. Hamdok.

“Israel’s exclusive engagement with Sudan’s military legitimizes the military’s quest to remain in power and weakens the civilian component of the government… Israel’s strategy of building strong alliances with the military and security agencies may have worked in some North African and Middle Eastern countries. However, this approach is highly unlikely to work in Sudan,” cautioned analyst Mohy Omer.

UAE facilitation of a Sudanese-Israeli relationship coincided with Emirati backtracking on the full disbursement of its post-Bashir US$3 billion aid package. The move appeared designed to strengthen the hand of the military and General Hemdeti at the expense of the civilian tack of the governing structure.

At the same time, the UAE, rather than helping to flatten the playing field ensured that the military would have no vested interest in a democratic transition that would put men in uniform under civilian control and curb their ability to divert state revenues into accounts in Emirati banks.

Speaking weeks before he resigned in June 2020 as Sudan’s finance minister, Ibrahim al-Badawi, a former World Bank official, charged that revenues from the export of meat to Saudi Arabia were pocketed by the army while a Swiss-based company collected the civil aviation authorities’ income and transferred it to an account in the UAE.

Mr. Al-Badawi asserted that some 200 military-controlled companies with an estimated US$2 billion in revenues that should flow into the state’s coffers remained beyond his ministry’s purview.

Mr. Al-Badawi’s description of the state of fairs was likely one factor that prompted the International Crisis Group to warn that failure to support Mr. Hamdok “could jeopardise the transition, with tragic consequences for the people of Sudan and the region.”

The group issued its warning four months before the coup. It’s a warning that today rings even louder as the United Nations, the African Union, the United States and even Saudi Arabia call for a return to civilian rule.