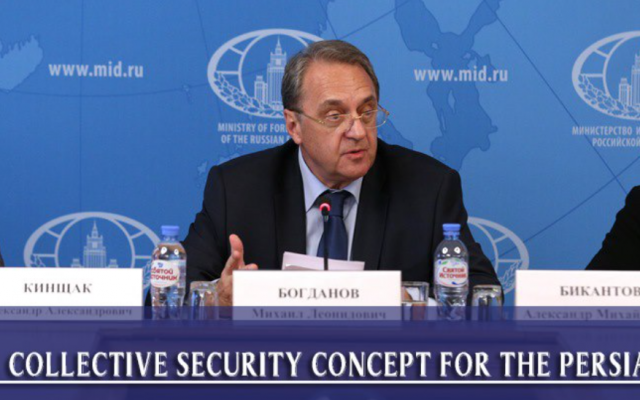 Russia hopes to blow new life into a proposal for a multilateral security architecture in the Gulf, with the tacit approval of the Biden administration.

If successful, the initiative would help stabilise the region, cement regional efforts to reduce tensions, and potentially prevent war-wracked Yemen from emerging as an Afghanistan on the southern border of Saudi Arabia and the Gulf of Aden and at the mouth of the Red Sea.

For now, Vitaly Naumkin, a prominent scholar, academic advisor of the foreign and justice ministries, and head of the Institute of Oriental Studies at the Russian Academy of Sciences, is testing the waters, according to Newsweek, which first reported the move.

Last week, he invited former officials, scholars, and journalists from feuding Middle Eastern nations to a closed-door meeting in Moscow to discuss the region’s multiple disputes and conflicts and ways of preventing them from spinning out of control.

Mr. Naumkin, who is believed to be close to Russian President Vladimir Putin, co-authored the plan first put forward in 2004. The Russian foreign ministry published a fine-tuned version in 2019.

Russia appears to have timed the revival of its proposal to begin creating a framework to deal with Houthi rebels, seemingly gaining the upper hand against Saudi Arabia in Yemen’s seven-year-long devastating war.

The Iranian-backed rebels appear to be closer to capturing the oil and gas-rich province of Marib after two years of some of the bloodiest fighting in the war. The conquest would pave the way for a Houthi takeover of neighbouring Shabwa, another energy-rich region. It would put the rebels in control of all northern Yemen.

The military advances would significantly enhance the Houthi negotiating position in talks to end the war. They also raise the spectre of splitting Yemen into the north controlled by the Houthis and the south dependent on Saudi Arabia and the United Arab Emirates.

“The battle for Marib could be a final stand for the possibility of a unified Yemen,” said Yemeni writer and human rights activist Nabil Hetari.

A self-declared independent North Yemen would potentially resemble an Afghanistan sitting on one of the world’s critical chokepoints for the flow of oil and gas. North Yemen would be governed by a nationalist Islamist group that presides over one of the world’s worst humanitarian crises, struggles to win international recognition, restore public services, and stabilise a war-ravaged economy while an Al-Qaeda franchise operates in the south.

The Russian initiative also appears geared to take advantage of efforts by Middle Eastern rivals Saudi Arabia, the United Arab Emirates, Qatar, Turkey, and Iran to reduce regional tensions, get a grip on their differences, and ensure that they do not spin out of control.

Russia seems to be exploiting what some describe as paused and others as stalled talks between Saudi Arabia and Iran mediated by Iraq. Iraqi officials insisted that the talks are on hold until a new Iraqi government has been formed following last month’s elections. The discussions focused at least partially on forging agreement on ways to end the Yemen war.

Mr. Naumkin suggested that the Russian initiative offers an opportunity to carve the Middle East out as a region of cooperation as well as competition with the United States in contrast to southeastern Europe and Ukraine, where US-Russian tension is on the rise.

A State Department spokesperson would not rule out cooperation. “We remain prepared to cooperate with Russia in areas in which the two sides have common interests while opposing Russian policies that go against US interests,” the spokesperson said.

The Russian proposal calls for integrating the US defense umbrella in the Gulf into a collective security structure that would include Russia, China, Europe, and India alongside the United States. The structure would include, not exclude Iran, and would have to extend to Israel and Turkey.

UAE efforts to return Syrian President Bashar al-Assad to the Arab, if not the international fold, although not driven by the Russian initiative, would facilitate it if all other things were equal.

Inspired by the Organization for Security and Co-operation in Europe (OSCE), the proposal suggests that the new architecture would be launched at an international conference on security and cooperation in the Gulf.

Russia sees the architecture as enabling the creation of a “counter-terrorism coalition (of) all stakeholders” that would be the motor for resolving conflicts across the region and promoting mutual security guarantees.

The plan would further involve the removal of the “permanent deployment of troops of extra-regional states in the territories of states of the Gulf,” a reference to US, British, and French forces and bases in various Gulf states and elsewhere in the Middle East.

It calls for a “universal and comprehensive” security system that would take into account “the interests of all regional and other parties involved, in all spheres of security, including its military, economic and energy dimensions.”

In Mr. Naumkin’s reading, Middle Eastern rivals “are fed up with what’s going on” and “afraid of possible war.” Negotiations are their only remaining option.

“These are talks between autocrats keen to protect their own grip on power and boost their economies: not peace in our time, only within our borders,” cautioned The Economist.