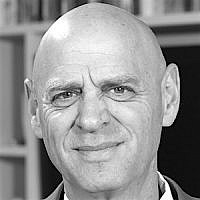 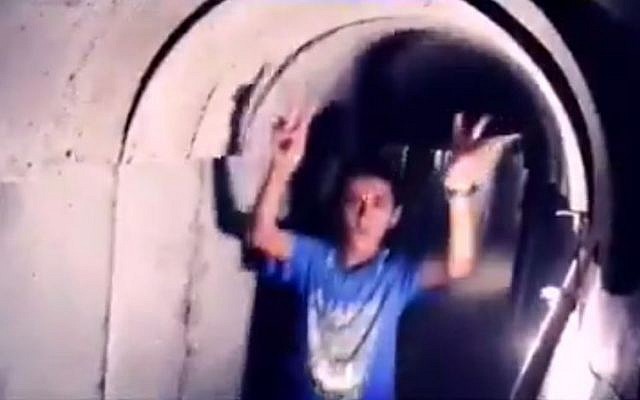 An image taken from a video on Hamas's Facebook page on July 20, 2016 shows Palestinian children inside a tunnel dug by the terror group in the Gaza Strip. (Screen capture from Facebook)

In the event of a future large-scale clash between Hamas and Israel, the Israel Defense Forces (IDF) will face a complex challenge, which will include dealing with an elaborate maze of tunnels built by Hamas beneath Gaza city.

Hamas’s war doctrine rests on three central components. The first is firing massive rocket and mortar fire toward Israeli territory. The mortars target border areas near the Strip, while the rockets are designed to paralyze large areas of Israel, with a huge emphasis on the greater Tel Aviv central region.

The second component is the digging of cross-border attack tunnels into southern Israel from Gaza. These are designed to inject terror cells into Israeli territory, and to attack IDF positions, civilian towns, and villages. The goal of the tunnels is to maximize Hamas’s offensive impact on the Israeli psyche, and could include attempts to temporarily conquer Israeli territory with the intention of hoisting Hamas flags, while also seeking to kidnap Israelis.

The third pillar of Hamas’s strategy is based upon a network of defensive tunnels built inside Gaza, particularly underneath Gaza City. Coupled with the booby trapping of buildings, and stockpiling of anti-tank missiles and other weapons; these efforts are aimed at inflicting as many casualties as possible upon the IDF once inside Gaza. They are also a vital tool in the attempts to kidnap soldiers in the course of future hostilities.

This is the shape of Hamas’s force build-up, training, and war preparation programs, and the IDF requires offensive and defensive operational plans to deal with the threat effectively.

A new phase of defense

For the first time, the IDF will have to prepare intensive defensive operations on the border and a little further back from it. This is vital to prevent Hamas from implementing their objectives. The defense of villages and towns, and the IDF’s vital border line dotted with roads and military positions, is key to a successful defense.

Beyond that, the IDF’s reply must be offensive; based, in part, upon a massive air campaign against Hamas targets. The damage Gaza will incur in such an operation will be enormous, due to Hamas’s strategy of embedding itself deep inside civilian areas.

The other component of the offensive reply will be a ground operation, in which the main goal should be to turn the underground city built by Hamas in Gaza into a death trap for Hamas operatives. Presently, this underground city enables Hamas to function as a vanishing enemy, employing lethal hit and run tactics. It emerges out of tunnels under homes, strikes likes a snake, and then disappears.

The IDF’s reply must be to blow up the underground city. This will require precise intelligence, and the ability to map out the subterranean assets built by Hamas.

The more intense Hamas’s attacks are, the more damage the Gaza Strip will incur. Regrettably, even in areas where terrorists hide in civilian neighborhoods, particularly in the densely built, urban sprawl of Gaza City, the IDF will still have to destroy this underground maze, and Gaza will be facing enormous levels of self inflicted damage.

Moving swift and sure

This operation must also be completed quickly, unlike Operation Protective Edge, which lasted for 51 days in the summer of 2014. A rapid and decisive victory, in which the IDF enters the Strip, divides it up, and controls exits and entrances, will be the correct approach. Israel cannot allow itself to be dragged into lengthy conflicts.

The IDF will be required to prove itself yet again, and it will have to fight in built up areas whilst complying with the principles of international law. Many efforts to avoid harming noncombatants will be required. The world will be examining Israel under a magnifying glass, but, moreover, Israel will be accountable to itself, as ever and always.

Recently, Israel’s State Comptroller released a report that examined the the 2014 conflict, and opined on three central flaws in Israel’s performance. The first, and most severe problem, was the lack of strategy on the part of the Israeli government, and the extremely poor manner in which the cabinet functioned, leading to an inability to make decisions.

There was also a need for greater combat readiness and precise tunnel preparations and operational steps, so as to avoid a drawn out operation..

The report concluded that Operation Protective Edge was too protracted and lacked a dedication to the goal of decisive victory.

The IDF should study this report carefully. Intensive preparations – including joint preparations with the government – will enable Israel to arrive at the next round in complete readiness to achieve the rapid victory required. It can be done.