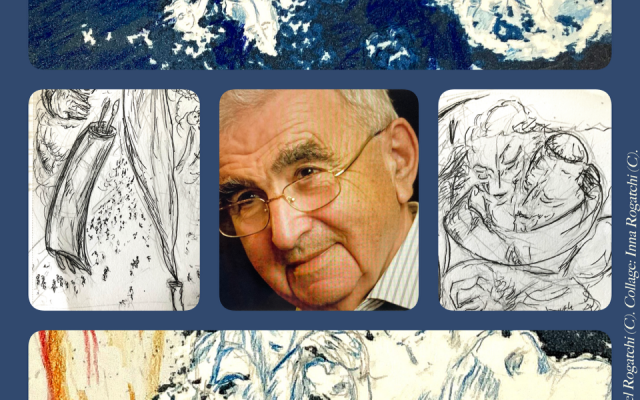 He was a few years older than our parents. As our parents’ older brother. This is how we always perceived him and his wife Olga, as a bit older siblings of our parents.

And theirs was a special generation. The generation of the children of the Second World War. The Jewish children of Eastern Europe and the Baltic states. Those who were lucky to survive.

My mom was 9 years old when the Holocaust came to Ukraine. Her memories were the ones of a shocked and terrified girl whose understanding of happiness was an image of an  apple and a bun, and who just absolutely could not hear a sound of a German language till the end of her life , despite the family being Yiddish-speaking and it was supposed to be close. But it was not for her.

My father was 11 at the start of implementing the Final Solution in Ukraine. He saw things from the point of view of a quiet and intelligent, a bit older Jewish boy, I concluded, observing his attitude towards the conversations about the war. Against the background of practically daily conversation, mentioning, sigh, memory, allusion towards the war in my family during the decades after it, my father was absolutely silent. Always.

His silence was different from the silence of the other members of my family. My grandfather ‘s silence, for example, was so fierce that you can feel his burning anger decades after the war, as long as he lived, actually. My father’s silence about the war was not fierce, but it also was not numb, if you know what I mean. It was the silence of a fundamentally wounded boy who decided not to show it up. And he did not. His despise towards the perpetrators of the Final Solution was as complete and absolute, as his silence about it.

And Grisha, as we always called our dear friend despite his indisputable seniority in every sense, Grisha was a year older than my father. He was 12 when the WWII broke and ran with his family from the death, direct death and total destruction which that 12-year old Jewish boy from the Lithuanian Jonava saw at extremely close distance. From no distance, actually, no distance at all. 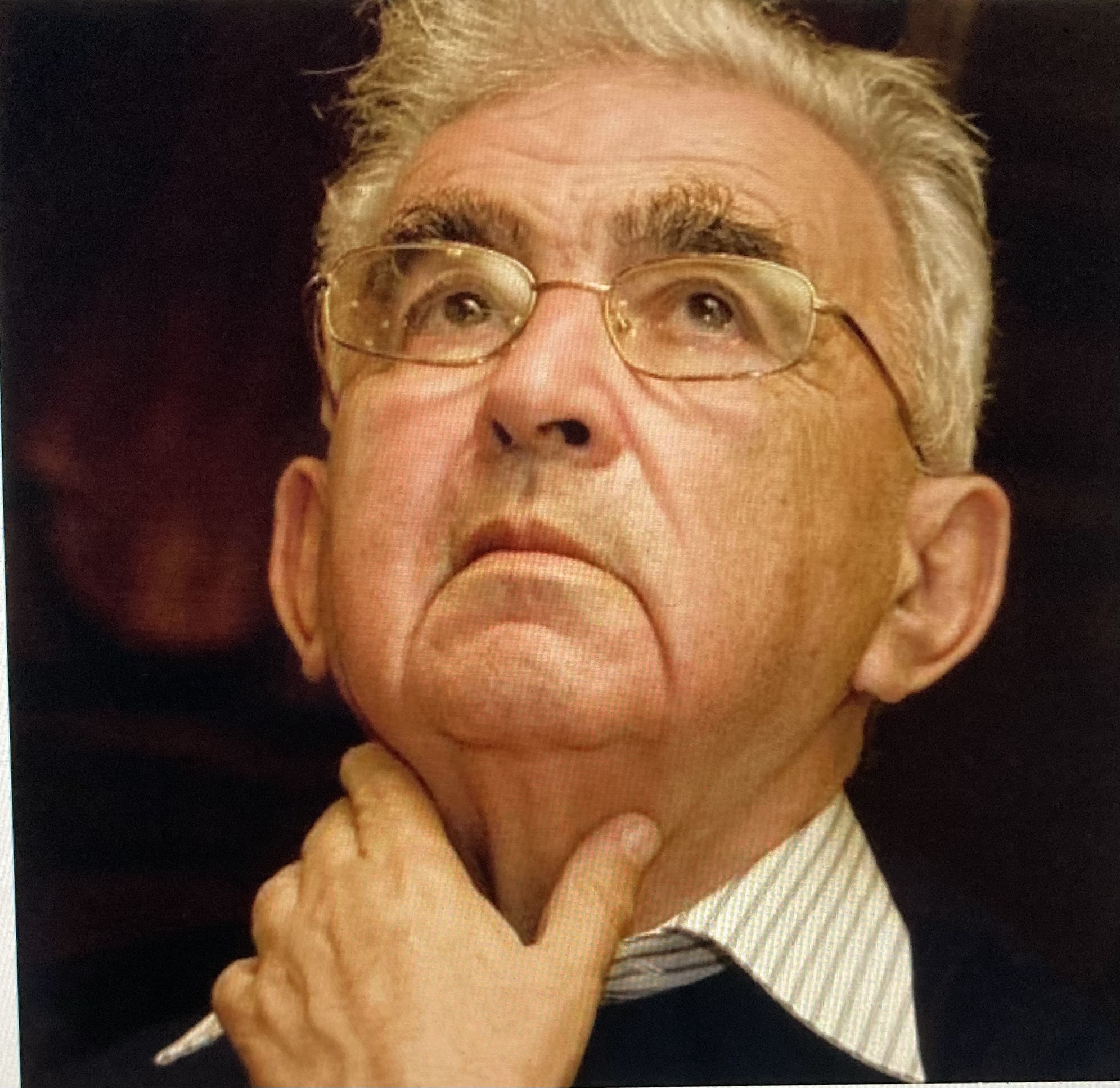 What is the age of 12 years for the Jewish boy in a traditional family? It is the age when a boy starts to be prepared for his bar mitzvah , to become a man, an adult. The preparations make him far more attentive, his mind seriously more disciplined and better organised, his memory sharpen to the degree of a qualitative change. Because the concept of adulthood in Jewish traditions means an ability to analyse and to make conclusions.

My father who was 11 in 1941, did not start to prepare for bar Mitzvah. Grisha Kanovich, who was already 12, did. We always did and always will call him with that loving name because he was the man whom one can only love. Despite a total horror which he observed in his life for all the years of the Shoah, total devastation which he faced during post-Shoah years, Grisha was kind, deep, wise, measured, warm and soulful special man whose soul, I believe , expanded to accommodate the souls of his murdered brethren , as from his Jonava shtetl, as from the 96,5% of the over 200 000 Lithuanian Jewry annihilated in the Shoah with diabolic efficiency, as of many of those minimum six million of our people annihilated during the Holocaust.

Grigory Kanovich’s response to that unspeakable horror was his decision to tell us about them. Kindly, nicely, peacefully, in a beautiful way of our Yiddish lullabies. In his novels, poems and stories, Grigory Kanovich was singing our lullabies to all those Jewish people he knew and remembered but who were not living anymore, after the Final Solution planned success. At the same time, Kanovich’s prose and poetry was a beautiful, unique cantata of those lullabies as if sung by the people destroyed. Tailors, teachers, melameds, children , invalids, Yiddish mothers, mohels, tzaddiks, grandmothers. Babies. 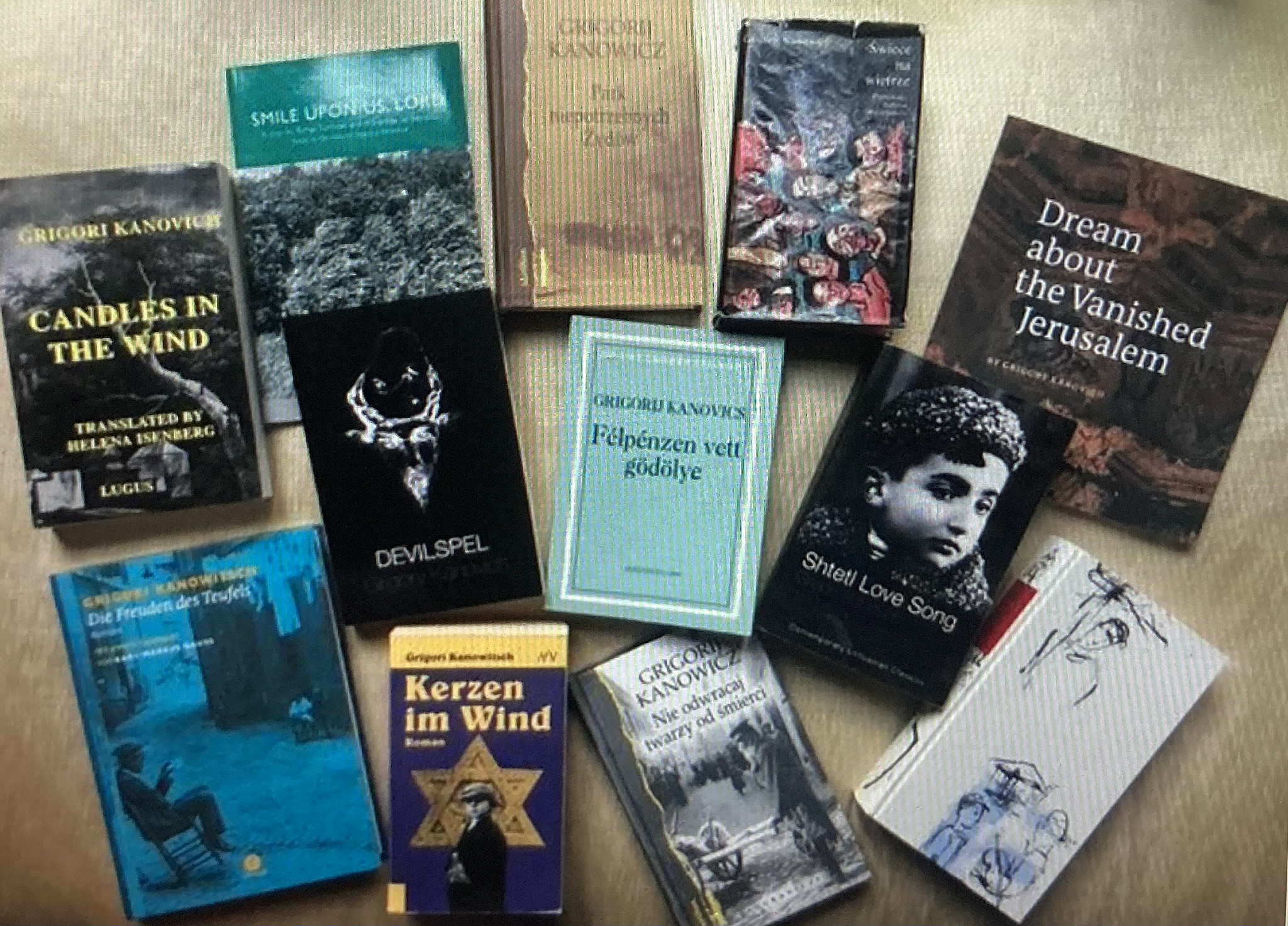 During 60 years, just think about, practically a human life, Grigory Kanovich did live also the lives of all those people. All those people who were prevented from life, who were robbed of life, who were tortured, slaughtered in the most decisively inhuman way. He restored the Shtetl in the most delicate , gentle, embracing way. Thanks to his heart and his mastery of writing, the tapestry of this essential part of the European landscape of memory is preserved.

And not only that. This restoration of violently destroyed life was done by Grigory Kanovich with impeccable taste, measure, and dignity. Because the tone in which one speaks about unspeakable matters the big way. It sets up the perception for millions, and it defines the way of memory in the lasting perspective.

Grigory Kanovich has become the person who has recreated the world of Lithuanian Jewry from ashes, doing it lovingly, meticulously and forever.

Was his contribution to the living memory worthy of the Nobel prize? Absolutely. We tried, and our The Rogatchi Foundation contributed to the nomination of the classic of modern Lithuanian literature to the Nobel Prize last year. We are aware that there were efforts to do it before, as well. It did not happen. We believe that it is just fundamentally wrong.

Yet before, our Foundation recognised Grigory Kanovich and his meaningful, talented and wonderful family as our Humanist of the year 2020. He was a true humanist and thus he will live in our grateful family forever.  At the same time, my husband artist Michael Rogatchi has created a small series of his homages to Grigory Kanovich and his world which are illustrating also my tribute to our dear friend.

We are very grateful to the Creator that we knew and were friendly with such a rare man. Not just a master, but a loving and humble son of our people, wise and enlightening poet of the Jewish memory, in whose books there is no place for a black colour, but always for a glimpse of sun, the remnant of a smile, the warmth of a candle, or the author’s and his reader’s loving memory of it. 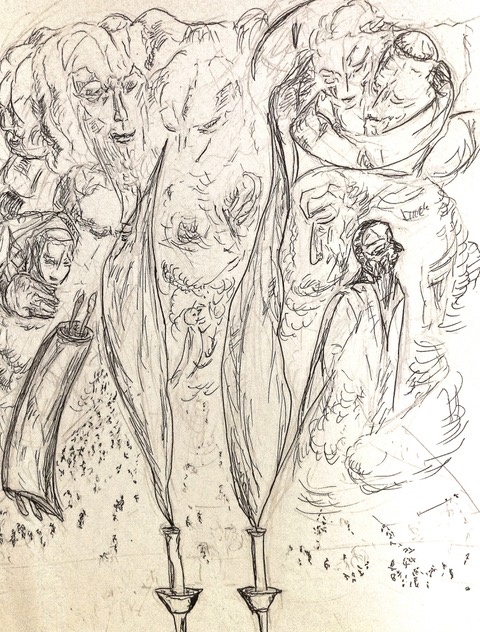 It is not without a resin that Grigory Kanovich family has a special, emphatic sense of compassion and its mission. Grisha’s older son Dmitri  is known as a founder of the rather special Looking at the Stars Foundation  which currently organises highly important unique concerts in the middle of the war in Ukraine. The name of the son’s Foundation came straight from his father’s famous novel. It is a deep, organic legacy of goodness.

Grisha’s younger son Sergey, himself a poet and writer, is director of the project and the director of the forthcoming The Lost Shtetl museum and memorial complex in Seduva, Lithuania,  authored by the world-famous Finnish architect professor Rainer Mahlamäki, a unique and utterly necessary memorial to the tragic destiny of Lithuanian Jewry.  Yet before, in the capacity of a leader of Maceva Foundation, Sergey was instrumental in an essentially important and truly beautifully done restoration of the Jewish cemetery in Seduva where practically all inhabitants of its shtetl were murdered in a swiping motion in 1941.

I was very much hoping  that Grisha would see The Lost Shtetl ready and open. It was quite important to me for him to see it realised. In any case, the rare project develops well, and I think that Grisha knew and was sure that The Lost  Shtetl which he, metaphorically, did restore more than anyone else, will be realised, to become the reality. And it will be, soon. I also hope that it would memorialise the great Jewish writer Grigory Kanovich in an appropriate way.

I do not remember when the cloud of sadness covered me so thoroughly as it happened when we heard about dear Grisha’s passing.

He passed away on the Shabbes eve, as our true tzaddiks are privileged to do. I tend to think he smiled in his special quiet and warm way. Dear Grisha, still a gentle Jewish boy in his 93 years on the earth. He did teach us to look at stars – from the abyss. The bravery of this attitude did assure his unforgettable smile. Because of his heart of devoted Jewish love , and because of his own soul’s capacity to accommodate all those souls of our destroyed people, preserve them and to bring them close to us decades and decades in, Grigory Kanovich was granted a long productive life and wonderful family. 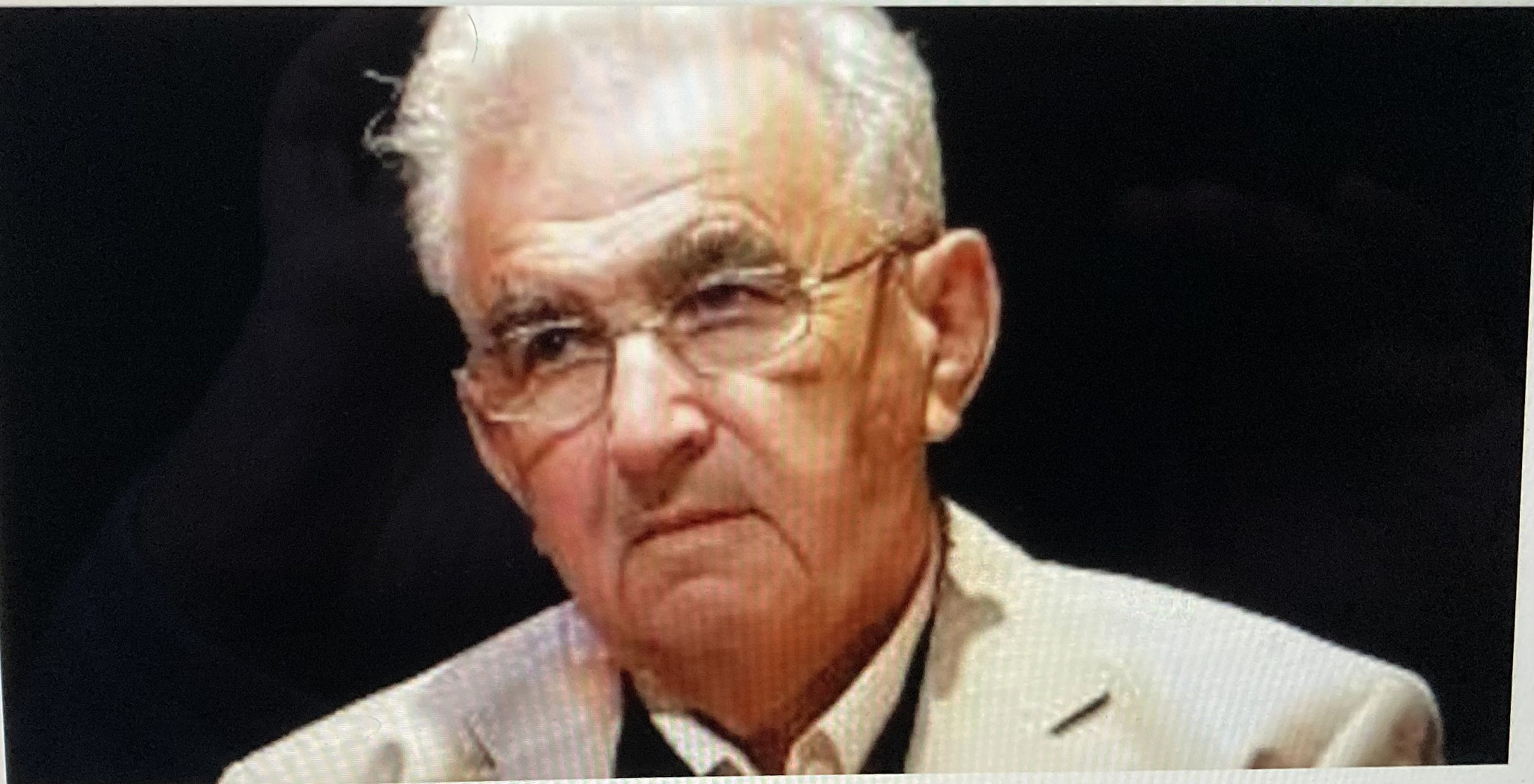 Such love is not mortal. It just relocates. Towards the stars which Grisha felt by every particle of his special Jewish soul. He knew the ultimate location since he was just twelve.

About the Author
Inna Rogatchi is internationally acclaimed writer, scholar, artist, art curator and film-maker, the author of widely prized film on Simon Wiesenthal The Lessons of Survival. She is also an expert on public diplomacy and was a long-term international affairs adviser for the Members of the European Parliament. She lectures on the topics of international politics and public diplomacy widely. Her professional trade-mark is inter-weave of history, arts, culture and mentality. She is the author of the concept of the Outreach to Humanity cultural and educational projects conducted internationally by The Rogatchi Foundation of which Inna is the co-founder and President. She is also the author of Culture for Humanity concept of The Rogatchi Foundation global initiative that aims to provide psychological comfort to wide audiences by the means of high-class arts and culture in challenging times. Inna is the wife of the world renowned artist Michael Rogatchi. Her family is related to the famous Rose-Mahler musical dynasty. Together with her husband, Inna is a founding member of Leonardo Knowledge Network, a special cultural body of leading European scientists and artists. Her professional interests are focused on Jewish heritage, arts and culture, history, Holocaust and post-Holocaust. She is running several projects on artistic and intellectual studies on various aspect of the Torah and Jewish spirituality. She is twice laureate of the Italian Il Volo di Pegaso Italian National Art, Literature and Music Award, the Patmos Solidarity Award, and the New York Jewish Children's Museum Award for Outstanding Contribution into the Arts and Culture (together with her husband). Inna Rogatchi was the member of the Board of the Finnish National Holocaust Remembrance Association and is member of the International Advisory Board of The Rumbula Memorial Project ( USA). Her art can be seen at Silver Strings: Inna Rogatchi Art site - www.innarogatchiart.com
Related Topics
Related Posts
Inna Rogatchi