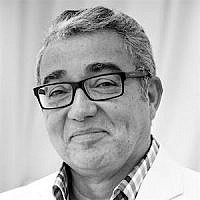 The Blogs
Charles Lugassy
Apply for a Blog
Please note that the posts on The Blogs are contributed by third parties. The opinions, facts and any media content in them are presented solely by the authors, and neither The Times of Israel nor its partners assume any responsibility for them. Please contact us in case of abuse. In case of abuse,
Report this post.

Who hasn’t heard of this festive atmosphere where the smell of Mofleta and Moroccan donuts called sfinges, are served with sour milk and leben? All of it suffused with the Andalusian spirit so dear to hearts of Moroccan jews?

Where does the word Mimouna come from?

The Mimouna is an evocative celebration for all Moroccan Jews worldwide.Where does its century old tradition take root?

It is told in the work of reference of Rav Shimon Baroukh of Jerusalem that the word Mimouna comes from the Hebrew word EMOUNA, namely, trust in God. This is indicative of the unwavering Emounah which defines Moroccan Jews. Throughout the entire holiday of Pesach, they longed for the coming of the Machiah, and when, once it ends, the Machiah did not come, they celebrate this holiday to show that their emounah remains unflinching regardless.The Sage comforts us by saying that, just as our ancestors were freed from the Egyptian yoke during the month of Nissan, so too, the Mashiach will reveal itself during Nissan, which is precisely around the month of April.

A second explanation is the following : etymologically, the word Mimouna comes from the Hebrew word MAMONE, which means money. We know that Pharo’s army drowned, along with their gold. What is interesting to note is that the Egyptian’s wealth was rejected by the Red Sea after they perished. From that moment, the Children of Israel became wealthy by this unexpected treasure, which drifted on the shore of the Red Sea. They only succeeded in retrieving this treasure after the celebration, which corresponds with the Mimouna. They received the MAMONE.

A third explanation: Mimouna also means luck, good fortune or good time in Arabic. According to the tradition, this time of year is an auspicious time to succeed in business and to find a soul mate. Pesah or Passover in English, corresponds to spring, the beginning of the commercial year, the moment to wish good luck and to wish a good year: TERBHOU OUTSAADOU.

After Passover, which generally has been costly for everyone, we ask Hachem, God, to send us good fortune, good luck or in Arabic a good Mimoun.The Jewish local merchants and artisans in the old Morocco were impatient to see the spring coming, the high season after Passover. They were wishing one another a good Mimoun, the Mimouna.

Another hypothesis brought by the historians: the Mimouna was commemorating Rabbenou Maimon’s death, the Maimonide’s father who is said to have lived 6 years in Morocco.

Another version: the Christian Easter often falls at the same time as the Passover and the Christians in Spain had a special bread for the occasion called: La Mona. The Jews were looking forward for the end of Passover to eat this bread and ran to the bakery to claim their mona… “da me” (said in spanish) Mi Mona.. Mi Mona.. or MIMOUNA.

In the Hebrew literature, it is written that the origin of this celebration is ancient: According to Rav Baroukh, in the writing of Rav Nissim Gaon, who lived during the Xth (10) century in the city of Kairouan in Tunisia, there is a mention of the custom to eat dairy products at the end of Passover: milk represents food and sustenance and therefore the sign of a good living for the people who celebrated.In other writings afterwards, it is reported that the communities in Algeria had the custom to eat couscous with butter, milk and beans. They were also hanging ears of grain on the chandeliers.

This traditional celebration is also a great occasion for many to visit their family and friends and share the sweets that were prepared for the Mimouna. Tables are adorned with all kind of sweets, dry fruits, honey, dates, almonds, etc. and we wish one another happiness and success by saying TERBHOU OUTSAADOU. Some read proverbs of the King Salomon and give to their spouse and children their benediction by offering them dates filled with almonds. Others go to the city Rav, as in Montreal, or the Chief Rabbi David Sabbah receive members of the community and bless them by offering dates, symbol of kindness.

In Moroccan communities, the customs were to prepare a specialty made with dough called Moufleta in honor of the Mimouna. Everything in the ceremony surrounding this celebration brought them back to this wish of luck, fortune and good year: the tables were dressed magnificently for the Mimouna night with only sweet meals. There were zaban kind of nougat and mrozya a meal of raisins and almonds. Also, there were an entire fish symbol of abundance, beans and coins on a floured plate. Thus, we would find Moufleta, a kind of pancake, butter, soured milk, ears of grain and flowers… The minhag of eating moufleta can be understood by the writings of the kaf hahayim where he explains that the gaon mivilna would strive to taste hametz, thus showing that the Jews never truly wanted to stop eating chametz, but rather did so only in order to fulfill the mitsvah. Rabbi Halberstam of Sanz z’l would make Havdalah on beer at the end of pessach, precisely in order to show this eagerness we have to eat hametz.

Often, Muslim Moroccans offered all those goods since the Jews lived very closely with their Muslim neighbors in Morocco. We wished each other the famous TERBHOU OUTSAADOU, that is fortune and joy. It was customary during the evening of the celebration to open his home and heart to our family members and close friends. It was a continuous chain of mutual visits and the Mellahs were joyful for this long and jubilant night.

Additionally, in Morocco especially, on the night of Mimouna it was customary to go to a great rabbi, a Torah scholar and ask for a beracha. This can be explained by an account in the Talmud where Raba went to see his teacher, Reb Nahman, on the last day of Pessach to get a blessing.

Also, the Arizal mentions that the last day of Pesach is an auspicious time to receive blessings, as it is an “ ET ratson”, a special spiritual moment.

Another custom was to dip your fingers in a bowl of milk to symbolize the cross of the Red Sea. It was also an occasion for many to prepare the betrothal and the marriage ceremonies. The fiancé would bring honey, butter, milk, jewelry and gifts to the young girl.

In his book L’esprit du Mellah, JOSEPH TOLEDANO says that Mimouna was the only celebration during which the Muslim neighbor plays a fundamental role. Not only would he offer the hamets to the Jews but would also allow them to have a picnic in his field the next day. The day after Mimouna, Jews would meet close to water sources and Arabs saw it as a sign of benediction for the coming harvests. Jewish families eat along the see shore and others, who lived in cities, would go near a lake or a source of water to have their picnic.

The celebration of Mimouna became a national holiday in Israel under the influence of JewS originating from Morocco, which constitutes near a million inhabitants. This is an official recognition of the celebration by the Israeli authorities and it became a public holiday

Charles Lugassy is a journalist with Radio Shalom Montréal Canada. The above was edited and corrected by Natacha Myriam Lugassy.

About the Author
As a former journalist, Charles frequently traveled to Alberta, Western Canada and Quebec to cover political and economic events. In his 14 year career as a journalist for Radio Canada, he dealt with numerous national and international issues, acted as a point of contact with numerous high-profile political figures and broadcast nationally my reports. Charles was an anchor for the daily TV news and also the radio show "Semaine au Canada". He also possess over 20 years experience in Canadian immigration consulting. His enterprise specializes in providing immigration services to individuals, international business owners and entrepreneurs wishing to settle in Quebec or Canada. Beyond his professional experience, he takes great pride in being a member of the Quebec Sephardic Jewish community.
Related Topics
Related Posts
Comments