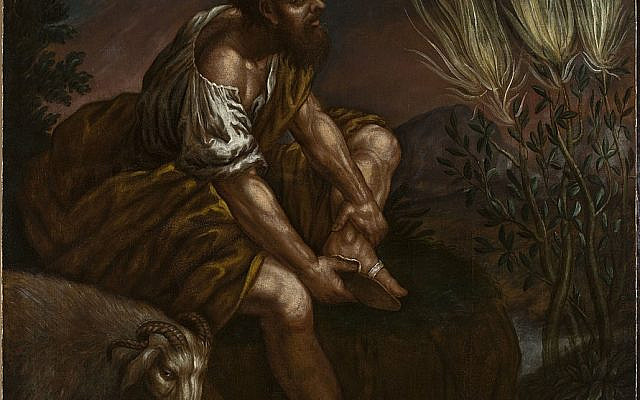 Why does the text provide an entire sentence explaining Moshe’s rationale for investigating the burning bush? What was Moshe’s religious education at that point?What did he know of his own national identity?

Upon seeing a majestic landscape or rare phenomenon, most people would feel a sense of awe. The ubiquity of that reaction is not remarkable, only the source attributed to derive it is distinctive. For a monotheist, one would credit the experience to their god. A polytheist might endow it to the most relevant or personal god. An atheist would be compelled by curiosity alone. Moshe stumbles upon a remarkable scene that deviates from nature and the text emphasizes the fact that he does not credit the event to a divine entity, rather he is compelled to investigate by his curiosity alone (Shmot 3:2-3). The reader must ask: What did Moshe know about God at this point? What was his education? At what stage in his life are these events even occurring?

The life of Moshe is rapidly developed by the text until this moment at the burning bush, punctuated by only a few pivotal life events that provide convenient insights into his mind. A careful reading of the text reveals that the majority of Moshe’s life was spent alone. Disconnected from his nation or even a community.

Following the harrowing events of his infancy, Moshe was spared death and permitted to be raised by his mother Yocheved by the daughter of Pharoah (2:9). When he ‘grew up’ he was brought to the daughter of Pharoah to be raised as her son (2:10). It is unclear from the text exactly how old Moshe was at this time, however he must have been old enough to remember. The text provides important clues informing the reader that Moshe at least knew his family and that he was a Hebrew. The text emphasizes that Moshe recognized the Hebrews, not the Egyptians, as his ‘brothers’ (2:11). He seeks to mediate in a quarrel between his fellows (2:13) and later when Aharon comes to meet him in the desert, they recognize each other as brothers (4:27-28). It is clear that Moshe had familial and national knowledge. However, religious knowledge is conspicuously absent.

Having spent the majority of his youth and adolescent life in the palace would likely have inculcated an Egyptian polytheistic foundation. Despite this he clearly had little concern for Egyptian divine power as he does not fear retribution for murdering an Egyptian, nor does he reflect any retention of Egyptian religious cultic practice when in the house of Yitro. He is merely Egyptian in appearance alone (2:19). At this point, Moshe’s national identity is clear but his religious perspective is ambiguous at best.

The text describes Moshe’s hasty escape from Egypt as he flees execution in Egypt. The next stage of his life consists of his marriage and life in the house of Yitro which the text juxtaposes with his exile from Egypt (2:15). However, a closer examination reveals many decades of time that are mysteriously missing from his life. The text is ambiguous regarding Moshe’s age at the time he fled Egypt. Combining the fact that he had ‘grown up’ again (2:11) with his presumed obstinance for authority, it seems reasonable to assume his exile occurred in his late teens or early twenties. The only age for Moshe that we know for sure is 80 (7:7), when he attempts to return to Egypt with his two sons, the youngest a newborn at the time. This leaves Moshe with approximately 60 years between his exile and his return to Egypt. Due to the lack of explicit mention of a miraculous elderly birth, it is reasonable to assume that Tziporah was between 15 and 40 at this time, the normative ages for fertility in the ancient world. At a maximum, Tziporah had their first son when she was 15 and her second son at 40 which means that Moshe did not arrive at the well and marry Tziporah until he was at least 55; likely closer to 70. Moshe spent at least 35-50 years alone. Decades that were so unremarkable and inconsequential that they are glossed over without even a single letter devoted to their presence.

These mysterious missing years of Moshe support a very different appreciation for the man who will become the leader of Israel. When Moshe arrives at the burning bush he is nearly nomadic.  A Midianite immigrant who fled his home and country many decades before. He married and made a new life for himself wandering the lands around Midian to tend to his father-in-law’s sheep (3:1). However, despite the decades away from his home and people the text hints that he never stopped caring and thinking about his home. Moshe named his first son Gershom as he was “a stranger in a foreign land” (2:22 and 18:3). Furthermore, the text provides a curious detail of how Moshe would pasture the flock. He took them into the desert to Horeb, presumably the area of Har Sinai. Shepherds would normally seek to avoid arid wilderness. From Midian in the south of the Levant, the best pasture land would be north, yet Moshe is traveling west, into the Sinai Peninsula desert back towards Egypt. The text is hinting at Moshe’s longing for home. Spending his time away from his family for the hope of catching a glimpse of the land from which he came.

The text subtly describes a man that misses his home land, however there is no mention of his longing for his people, Egyptian or Hebrew alike. After all, both had rejected him. Pharoah and the Egyptians wanted him dead (2:15) and the Hebrews were the ones who turned on him and reported his crimes to the authorities (2:14). Like Yosef before him, Moshe was not only exiled from his home and family, he also held suspicions of those he thought were closest to him (see Why didn’t Yosef contact his father from Egypt?).

Further still, Moshe had no concept of the religion and culture of his people. The text demonstrates this with Moshe’s surprising reaction to the burning bush. Moshe responds to this wondrous sight with curiosity, not religious awe (3:3). Even after Moshe is made aware of the supernatural origin of the event he fails to comprehend the awesomeness of the moment (3:5). Something that his ancestors would have known (Bereshit 28:17). Moshe shows no semblance of religious awe until he is informed that the voice is the god of his forefathers, Avraham, Yitzchak and Yaacov. Upon hearing these names Moshe immediately falls on his face out of divine fear (Shmot 3:6). After all these years Moshe had likely heard of many different gods by many different names. None struck him with much effect. God knows that Moshe would be unmoved by yet another god, but he would be moved by hearing the names of his ancestors. Names he would have remembered from his short time with his mother. He knew he was a Hebrew, he knew his family and his ancestors were Avraham, Yitzchak and Yaacov.

God knew that despite Moshe’s solitude, resentment and ignorance, he could not deny his love for his heritage or his curiosity. This is why God does not just appear to Moshe in Midian. Rather first Moshe must demonstrate that he remembers and cares to know the fate of his homeland. If only to catch a glimpse from afar in the Sinai Peninsula. Then God tests his curiosity with a wondrous sight that might have scared off others, but for Moshe it was too compelling to resist. It was this need to discover that made God finally activate Moshe on his divine mission (Shmot 3:4).

This was the perfect man to free the nation and care for them as they inherited the land of their forefathers. A man without a home or nation. Humbled by a history of rejection from those he thought of as blood or adoptive. Forcing him to leave Yitro, the only home he has ever known that loved and appreciated him. Even forcing him to leave his wife and children behind (18:2-4). Despite his resentment and fear, he complied. Compelled by love to seek their retribution and salvage his heritage. Abandoning everything good in his life to place himself into danger for the chance to save his people and realize the promises made to them. This type of man, possessing unwavering love for his heritage and an insatiable curiosity would be the perfect leader to endure the seemingly endless trials destined for the nation in the wilderness. Knowing that his curiosity and love would compel him to endure until their arrival at the land of their heritage. Understanding Moshe’s true nature makes his ultimate punishment to die right at the border outside the land of Israel all the more horrific. However, it might suggest that only his love was commendable while his curiosity was simply expedient. He was allowed to see his beloved people successfully to the threshold of the land. Unlike his curiosity which was left wanting, never to see the land itself.

This was also the perfect man to receive the Torah. A man lacking any religious conviction or preconceptions to contaminate his reasoning. Devoid of religious education, he was a tabula rasa, the perfect conduit to ultimately relay the commands and messages of the divine without imparting his own interpretation to comport with his prior cultic experiences. The text makes this point very clear when Moshe’s leadership is juxtaposed to Aharon’s. Aharon is left in charge of the people for 40 days and in that time found it necessary to satisfy the people’s needs by importing Egyptian religious iconography when he made the Golden Calf (see Why a Golden Calf?). The perfect conduit needed to be an aspaklariah me’irah (Yevamot 49b), a clear glass, allowing the divine message to transmit uncontaminated to the people (Bamidbar 12:8).