There is pitifully little said about the victims of Arab terror in Israel. They are struck down while doing the most ordinary things. Taking a walk. Praying. Heading home after a long day at work. Even at work. Or doing the grocery shopping.

Tuvia Yanai Weissman was 21 years old. An American citizen. An Israeli soldier. A husband. The father of a four-month-old baby girl. He was grocery shopping with his family, like any of us might. At a Rami Levi supermarket at Shaar Binyamin. Maybe picking up baby wipes. Or food to prepare for Shabbat. When Tuvia heard a scream of terror, he ran to help. And he was murdered.

Will we remember Tuvia Yanai Weissman’s name? Perhaps until the next attack. As more and more people have joined the list of victims of this so-called “knife-intifada” it becomes harder and harder to recall each one with the dignity and respect that each deserves.

Aside from the growing number of people who have been murdered by the steady stream of Arab terrorists produced by a culture of hate and continuous incitement, there are other victims of attacks like these. The ones whose names you never hear, let alone remember. There are the ones who are hurt, but will be okay; physically anyway. And then there are the utterly nameless, faceless victims: the countless ones who just happened to be there when these attacks happened. The ones whose scars will never be seen, yet will never really fade. 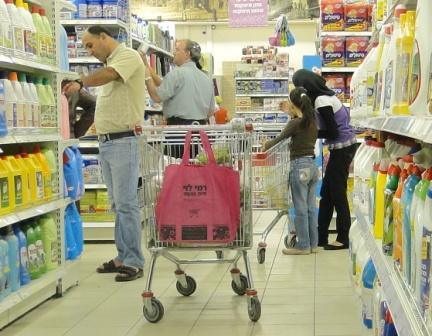 A Rami Levy grocery store in quieter days, when Jews and Arabs shopped peacefully side by side. (Laura Ben-David)

My friend Aaron, an immigrant from Canada, was in the Rami Levy grocery store when Weissman was killed. He had already done his shopping on Wednesday and had bought everything they needed for Shabbat, so he had no intention of going there on Thursday. But he was in the area. And they could always use more size 4 diapers. So he stopped in.

He headed straight to the the back section of the store where the diapers are. Suddenly, he heard a lot of running; he was alert, but not sure what was happening. Until he heard shouts of that one word that a part of us deep inside is always half expecting, but hoping never to hear: “Terrorist!”

Ever since the three boys were kidnapped and killed in the summer of 2014, Aaron had been thinking about getting a gun for personal safety, especially as he is on the road a lot. The grandchild of a Holocaust survivor, Aaron recounts how his grandmother survived Auschwitz, though her sister and mother were killed there. Her brother had run and hid in the forests and survived. Since then the self-preservation instinct was well-honed in his family. Aaron finally got a personal sidearm for self-defense last year, describing his thinking as follows: “In the Holocaust, Jews were rounded up like sheep. Now we have our homeland, we have a Jewish army, but bad stuff still happens and I don’t want to live a life of fear for myself or my family.”

Let’s face it though: having a gun for self-defense in all likelihood is just a security blanket and not something you ever imagine really needing to use. Suddenly, there he was, in the diaper section of a grocery store, with a very real, all-too-frightening scenario unfolding. Aaron took out his gun, cocked it, and ran unhesitatingly in the direction of the noise. Other people also had guns out and were responding. “I saw the terrorist fighting with a victim,” Aaron recalls. “I was still running. As I came to a halt with my loaded gun, many thoughts flashed through my mind. Should I shoot? What if I hit the victim? What if I hit the terrorist, but the bullet goes through and hits the victim? What if I can tackle the terrorist instead? But then I would be in the line of fire from other people! So, shoot?”

It is hard to imagine the fear, the responsibility, the expectations, the life-and-death decisions that went through Aaron’s mind and the minds of the many, many others that have been in similar circumstances in the near daily attacks that have taken place since October 2015. In this instance, Aaron didn’t have to make a decision because other people fired their weapons and the terrorist crumpled to the ground. Amidst the bloody scene, and with many people around screaming and crying, the first responders, Aaron included, began to breathe again and take stock of the situation. Suddenly, shockingly, again was heard the scream, “Terrorist!” There was another one!

They all ran to the next aisle. In the four seconds it took to get there, someone had already fired and the terrorist was on the ground. The screaming was so intense. There was blood everywhere. Cries of panic. Aaron tried calling the police, but it was so loud he couldn’t even be sure that they had heard him. Finally, he called a police officer friend of his and told him “Stabbing, Rami Levi, Sha’ar Binyamin” and confirmed that he got the details. His friend later told him he’d passed the info directly to dispatch.

Finally, the police, ambulances and the army showed up. They closed the store and asked everyone to leave. It was only at this point on his way out that Aaron really saw one of the victims. This one was getting treated for a wound before being shipped off to the hospital. He was the “lucky” one — he was the one who survived.

Outside the store, people were milling about in shock. Many were crying. Though unscathed physically, they were all emotionally traumatized. “I remembered suddenly that I had a loaded gun with me,” Aaron recalls, thinking about the chaotic scene outside. He went off to the side, removed the magazine, removed the loaded bullet, and replaced the magazine. Back to “normal”…

Aaron caught a ride home with another man who had been in the store. They discussed their experiences in the car…releasing a minuscule amount of the trauma they’d just experienced before returning home to their families. 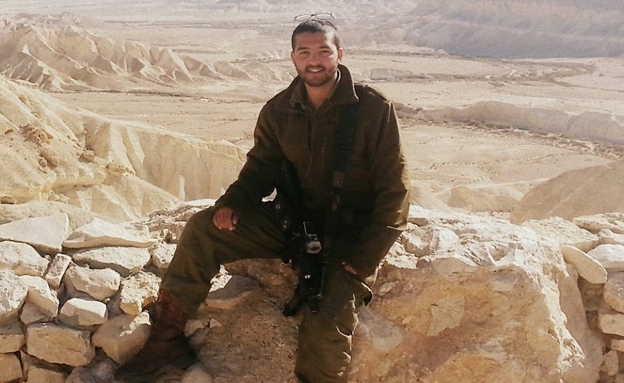 Tuvia Yanai Weissman never had the chance to discuss his experience in the store. He was struck down during his heroic act by one of those terrorists in the store. Terrorists? They were just kids! Yet they were brought up on a diet of hate; encouraged to stab Jews because of who they are. And so, terrorists they became.

Now there are two more Arab children who will be celebrated for the cold-blooded murder of a Jew. Honored. A twisted and grotesque source of pride…

Meanwhile another Jewish family has descended into the depths of sorrow and mourning. Another Israeli woman will know life as a widow. An infant, whose father was brutally murdered, will have to grow up never knowing her father. And dozens more Israelis, who came face to face with terror, will have to live with their memories for the rest of their lives.

When will this madness end?