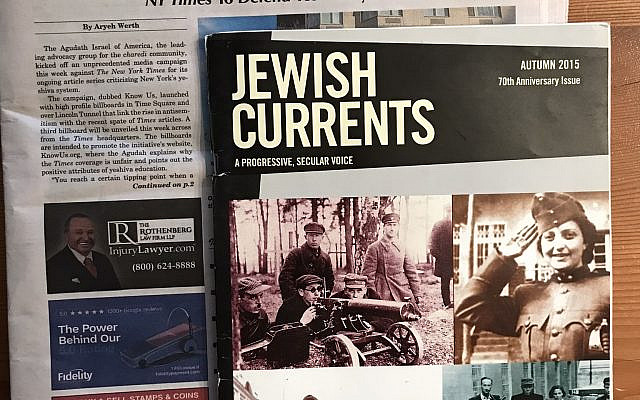 The Odd Couple of Jewish journalism

As is my habit, I bought the New York Times on New Year’s Day. I save the front page as a record of how the year began. The Styles section had a warm tonguebath of a feature on Jewish Currents with the title, “She’s Building a Little Jewish Magazine on Big Ideas.” The “she” is editor Arielle Angel. Founded by communists, Currents now describes itself as “a magazine committed to the rich tradition of thought, activism, and culture of the Jewish left.”

I know all about Currents because I’m a lifetime subscriber.

As fate would have it, the Times article appeared the day after I got the first issue of another Jewish publication to which I now have a long-term subscription: Brooklyn’s Orthodox The Jewish Press, which describes itself as “America’s largest independent Jewish weekly.”

The publications’ social, religious and political views are so divergent that I wonder whether anybody else subscribes to both of them, apart from research librarians at seminaries and think tanks. Other than having “Jewish” in their names, I can’t imagine any overlaps in a  Venn diagram of their passions, except, um, Israel. 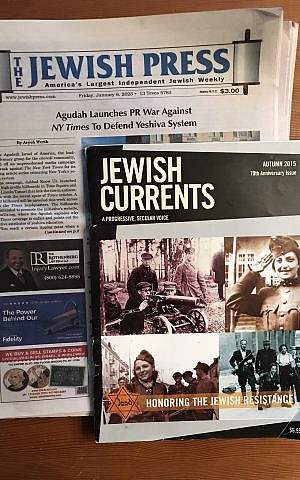 The Odd Couple of Jewish journalism.

Yet that very chasm between Currents and the Press accounts for why I subscribe to and appreciate them both. They open me to different worlds of faith and secularism, opposing views on Israel (or, the term also used at Currents, Israel/Palestine) and culture. Both are fierce in their dedication to what matters to them. In their own ways, both are open to informed debate. The very first issue of the Press arrived with a lengthy response to a December essay, “Modern Orthodoxy’s Moral Failure,” by public intellectual and conservative merry prankster Ben Shapiro, with more feedback sure to come.

And I’m happy to support publications that continue healthy print editions at a time when print is crashing as a journalistic medium. I’ve seen that first hand, as my decades-long subscriptions to The New York Jewish Week and The Forward lapsed as both switched to online-only formats. I even wrote about my attachment to the Forward after it announced the news in 2019. Getting both papers in the mail for weekend reading was a treat I sorely miss.

While my politics are 180 degrees (at a minimum) away from the Currents’, I always found it a compelling read. At some point in the last decade I became a subscriber. Its 70th anniversary issue in 2015, on Jewish resistance in World War II, impressed me so much that I saved it as a historical record. I even pitched then-editor Lawrence Bush on a story about my 2012 memoir, A Kosher Dating Odyssey, for Currents’ book section, but that didn’t fly; still, he was a real professional and replied in a gracious and humorous way. He doubted that a book with the word “kosher” in the title would appeal to the Currents’ readership.

As the Times article outlines, Currents has completely reconfigured itself since 2018 under a young editorial team led by Arielle Angel. The articles cover most of the topics you’d expect from a progressive publication, as it states:

Issues we cover include the uses and misuses of antisemitism, the inner workings of Jewish communal organizations, Israel/Palestine politics on the ground and internationally, race and racialization, strategies and horizons of American left movements, the global rise of the far right, diasporic cultural expression, labor, climate, incarceration, immigration, and feminism.

I give the articles a respectful scan to see what’s bubbling and churning in the minds of the Jewish left. And the personals in the print edition are to die for!

Back in 2016, when I saw Currents offered a lifetime subscription for $300, I checked the actuarial tables and decided I had enough years left to make the deal attractive. Hence, Currents will be rolling into my mailbox until at least the 2040s, so I hope.

As noted, the Times article on Currents appeared the day after the New Year’s Eve arrival of my first subscription copy of the Press. I’d been a sort of fellow traveler (now there’s a phrase the Currents staff will appreciate) of the Press since I moved to Brooklyn in 1980; the first useful thing I learned from the Press was the meaning of the word “frum.” While I never read the Press as fervently as I did the Jewish Week and the Forward—I lack the religious background to understand its yeshivish argot—I still enjoyed it as an occasional treat on my Friday commute home to the suburbs after I left Brooklyn. Even after I stopped commuting in 2018, I picked it up at a newsstand at Grand Central Terminal. I enjoyed scanning to learn about the wisdom of sages, advice for frum singles and their anxious parents, Torah learning, the latest threats to Israel and ads for the latest releases from book publishers. I even saved the 1982 Purim parody issue of “Not The Jewish Press.” 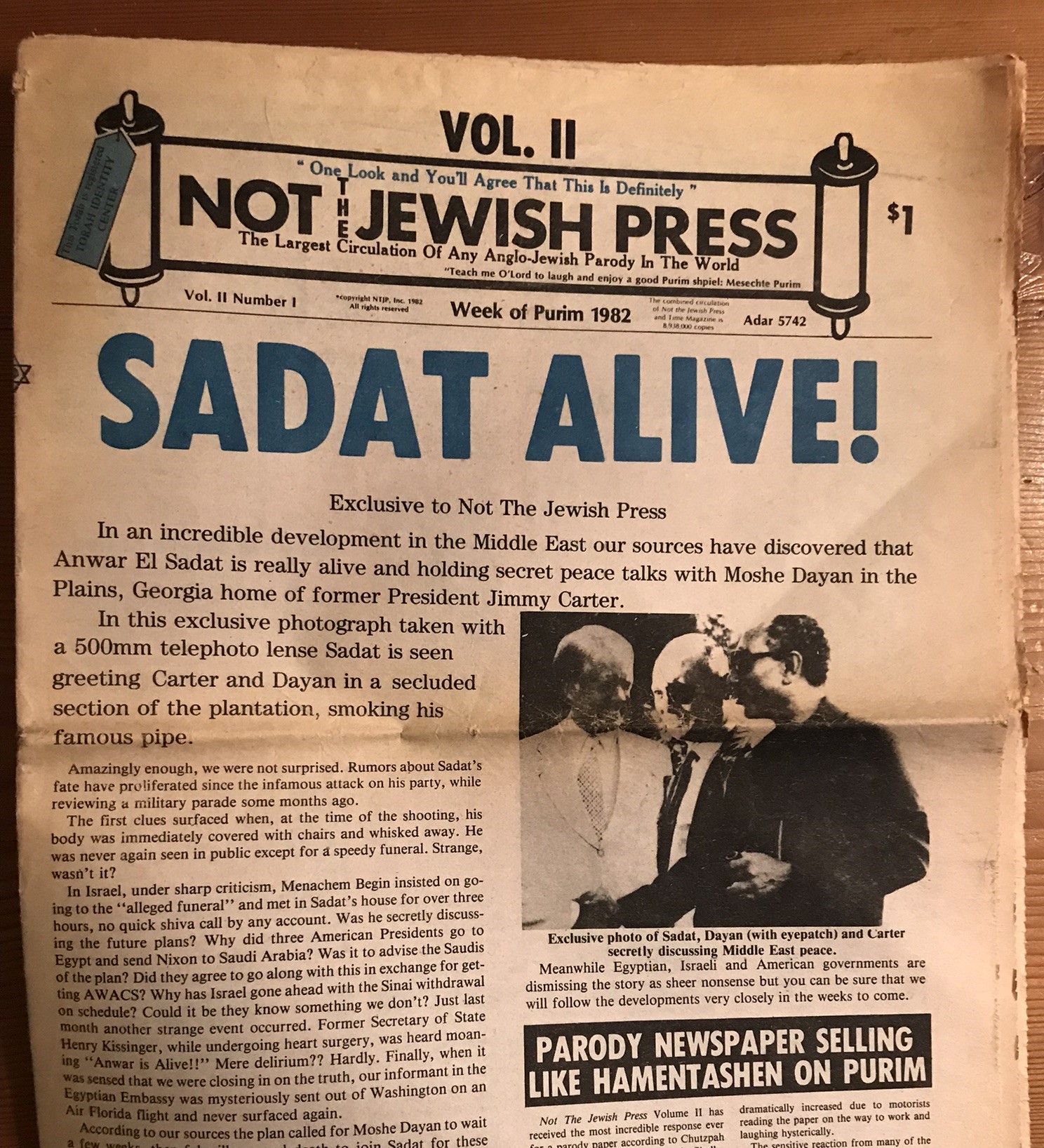 Since the pandemic my visits into New York are much less frequent, so I wasn’t getting my shot of the Press. As a result, I wondered, after decades of casual dating, was it time to put the subscription ring on the modest finger of the Jewish Press? Plus, the price of the most recent issue had jumped from $2 to $3. Doing the math, I figured the Hanukkah special for four years at $200 worked out to about $1 per issue. That sounded like a great deal, so I made a journalistic shidduch! The Press has no shortage of advertising, so it’ll keep that print version going for far longer than the next four years. The issues that have arrived so far clocked in at over 100 pages each. After the long drought of no Jewish weeklies, I can now look forward to the Press rolling into my mailbox as a welcome guest every Shabbat.

What am I getting from this Odd Couple of Jewish journalism? Some sample headlines give a flavor of their content. From the Currents website:

Meanwhile, over at the Press:

I try to imagine a (kosher) dinner bringing together editors of the two publications. It’d probably be held in Brooklyn somewhere in the middle between Chabad Crown Heights, black hat Boro Park and socialist hipster Park Slope. What would that be like? Could there possibly be common grounds for discussion, a spirit of Ahavas Yisroel, love of your fellow Jews, or would the meeting disintegrate into its opposite, Sinas Chinom (causeless hatred).  Chabad’s discussion of Ahavas Yisroel starts with these words, which sound highly applicable (I bolded a relevant sentence):

Probably the most difficult mitzvah in the Torah for most people is the mitzvah of Ahavas Yisroel. The mitzvah of Ahavas Yisroel requires one to love his fellow Jew like himself. Indeed the mitzvah is made more difficult because it applies to one’s fellow Jew who is his neighbor. Many people are able to manufacture love for some stranger in Israel or America or Australia. The real challenge is to love your neighbor who may be irritating and aggravating while pursuing different vested interests.

I’d like to think, after some shots of Slivovitz, bowls of no-GMO borsht and fresh warm fair-market challah, the editors could find points of common interest, if nothing else the price of paper in the time of inflation and management of distribution channels. Maybe a love of Yiddish could be the gateway to connection?

I’ll be an optimist on this fantasy. The gathering could be an all-Jewish version of the Abraham Accords. It could be swords into plowshares. It could even be the wolves lie down with the sheep. It  might even lead to a counter-intuitive cross-brand marketing campaign: Get a subscription to one, get a subscription to the other for half-price. I’d jump on that—if I didn’t already subscribe to both.

About the Author
Van "Ze'ev" Wallach is a writer in Westchester County, NY. A native of Mission, Texas, he holds an economics degree from Princeton University. His work as a journalist appeared in Advertising Age, the New York Post, Venture, The Journal of Commerce, Newsday, Video Store, the Hollywood Reporter, and the Jewish Daily Forward. A language buff, Van has studied Spanish, Portuguese, Russian, Yiddish and Hebrew, although he can’t speak any of them. He is the author of "A Kosher Dating Odyssey." He is a budding performer at open-mic events.
Related Topics
Related Posts
Van Wallach