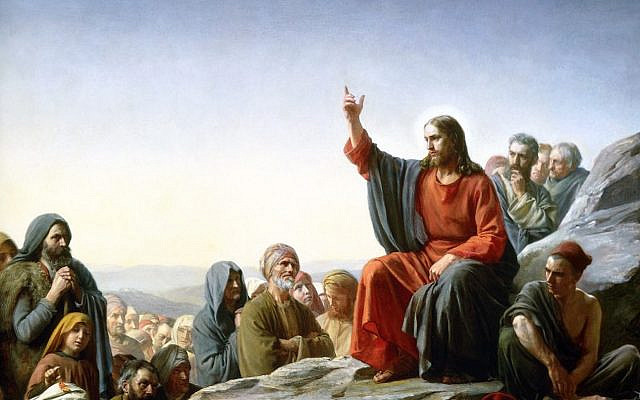 Classic theosophy says the New Testament should not be read literally, or on a superficial dead-letter level. The very Gospels suggest the same idea.

The truth expressed by parables, myths and legends is deeper than merely material facts. The narrative of the miraculous birth of Jesus, for instance, symbolizes the process of the first great Initiation, not his material birth. The teaching is true, but not its dead-letter interpretation.

It has been said:

“The Initiate of the first degree is as pure as a child. The center and focus of his soul has been born already to the realm of immortal consciousness. His perception of life is initially like that of a defenseless child. His survival is precarious. He is threatened by Herod, an expression of collective selfishness. In spite of the danger, he is already born and has been placed in the very center of material life, shedding light on all things around him.”

“Humbleness, symbolized in Christian parlance by the poor manger, refers to the absence of pride or egocentrism. The presence of various animals around the holy child means the essential communion with all beings. The stars in the sky tell us that such a unity includes the whole universe.” [1]

Jesus himself warned his disciples that he taught through parables, in Matthew 13:10-16. And yet, even today people attach themselves to the habit of mental laziness and read the New Testament in a literal way.

At this point, readers can legitimately ask: if the New Testament story about the birth of Jesus is an allegory, what about his actual birth?

Just like his disciples, Jesus was a Jew.  It should not be too much of a surprise that the story of his birth can be found in the Jewish tradition.

Helena Blavatsky shares this systematically suppressed story in a long footnote at “Isis Unveiled”.  The narrative should be read calmly and several times. It deserves being slowly examined, and meditated upon. According to the narrative, a man named Ben-Panther actually was the sinful father of Jesus, whose mother was innocent and free of sin.

Then she makes a summary of the facts:

“The story given is this. A virgin named Mariam, betrothed to a young man of the name of Iohanan, was outraged by another man named Ben Panther or Joseph Panther, says ‘Sepher Toldos Jeshu’. Her betrothed, learning of her misfortune, left her, at the same time forgiving her. The child born was Jesus, named Joshua. Adopted by his uncle Rabbi Jehosuah, he was initiated into the secret doctrine by Rabbi Elhanan, a kabalist, and then by the Egyptian priests, who consecrated him High Pontiff of the Universal Secret Doctrine, on account of his great mystic qualities. Upon his return into Judea his learning and powers excited the jealousy of the Rabbis, and they publicly reproached him with his origin and insulted his mother. Hence the words attributed to Jesus at Cana: ‘Woman, what have I to do with thee?’ (See John ii. 4.) His disciples having rebuked him with his unkindness to his mother, Jesus repented, and having learned from them the particulars of the sad story, he declared that ‘My mother has not sinned, she has not lost her innocence; she is immaculate and yet she is a mother…… As for myself I have no father, in this world, I am the Son of God and of humanity!’ Sublime words of confidence and trust in the unseen Power, but how fatal to the millions upon millions of men murdered because of these very words being so thoroughly misunderstood!” [2]

These are Blavatsky’s words, reproducing the traditional Jewish view of Jesus. The suffering of Mary as shown in this ancient narrative of Jesus’ birth does no harm to the essence of Christianity. [3]

More evidence is found in the fact that the authentic Templars – unlike the modern ones – shared the view that Jesus was a normal human being. While comparing the more recent and ill-informed Templars with the authentic mystical Knights who existed until the 14th century, Helena Blavatsky wrote:

“The present-day Templars, adhering strictly as they do to the Bible, can hardly claim descent from those who did not believe in Christ, as God-man, or as the Saviour of the world; who rejected the miracle of his birth, and those performed by himself; who did not believe in transubstantiation, the saints, holy relics, purgatory, etc.”

“The Christ Jesus was, in their opinion, a false prophet, but the man Jesus a Brother. They regarded John the Baptist as their patron, but never viewed him in the light in which he is presented in the Bible. They reverenced the doctrines of alchemy, astrology, magic, kabalistic talismans, and adhered to the secret teachings of their chiefs in the East.” [4]

The richness of the wisdom present in Christian tradition is not strengthened by suppressing facts. Real Christians are not afraid of looking at reality. It is correct to seek for truth and to accept it, even if it is often uncomfortable. Jesus didn’t create any Church, for instance, and never said he was a god, nor the “only son” of a God.

Jesus was a “son of God”, like anyone else in his Jewish nation. By “Father in Heaven” he meant the immortal Spirit or higher self of each human being.

[1] See “The Magic of the End of the Year”. Regarding other aspects of the great initiations, read “The Cosmic Creation in Every Foetus”, and “Easter And The Inner Rebirth”. In order to examine the symbolism of Christmas: “The Nativity Scene in Our Hearts” and “Don’t Ask Who Is Born at Christmas”.

[3] Mentioned by Blavatsky in her footnote at “Isis”, the book “La Science des Esprits”, by Eliphas Levi, presents several narratives of the birth of Jesus according to the Jewish tradition. An important Talmud document on the birth of Jesus, included in “La Science des Esprits”, is published online in Portuguese language: “Jesus Segundo o Talmude”.

* A Prophecy on Judaism and Christianity.

* China and the Implosion of the West.

* The Politics of Hysteria.