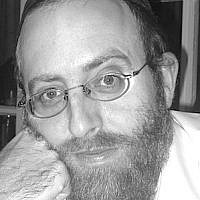 The Blogs
Gavriel Horan
Jewish Connection Maryland
Apply for a Blog
Advertisement
Please note that the posts on The Blogs are contributed by third parties. The opinions, facts and any media content in them are presented solely by the authors, and neither The Times of Israel nor its partners assume any responsibility for them. Please contact us in case of abuse. In case of abuse,
Report this post.

The University of Maryland Baltimore County – better known as UMBC – is not exactly known for their competitive sports teams – other than chess that is. When I began working at UMBC as a campus rabbi a year and half ago, I got used to the blank stares I received when I told people where I worked. “It’s a smaller branch of University of Maryland,” I would say. “They focus on STEM.” Over the past year and a half I have been truly taken aback by the intellectual level of the students – and to put it nicely – their study habits. On my previous campuses students had to excuse themselves from my Friday night Shabbos dinners early to go prepare for their frat parties – but until I got to UMBC I’d never had to compete with Hackathons, group engineering projects, or studying parties! I can honestly say that over my six year tenure as a campus rabbi, I have rarely received a question about Judaism that I couldn’t answer – until I came to UMBC that is. The students keep me on my toes and their thirst for knowledge, truth, and to make an impact in the world is truly inspirational. During my time there I have been introduced to a whole new world of chemical, mechanical, biochemical and computer engineering along with many other majors.

When UMBC’s Retrievers defeated Vermont in the last second of the game last week after a 23 game losing streak against them, most people thought it was a fluke. No one thought they even had a chance against the best team in the N.C.A.A March Madness tournament. Out of 64 teams competing in the tournament, UMBC was ranked the absolute worst with the lowest 16-seed rating. University of Virginia’s Cavaliers who had gone 31-2 during the season were the number one ranking team in the tournament. 96.7 percent of brackets had Virginia beating UMBC and 18.5 percent had them winning the whole championship – a few percent above the second highest rated Villanova. According to the ESPN Basketball Power Index UMBC had a 1.5 percent chance of beating Virginia – and rightfully so, given the fact that number 16 seeds have never won against a 1-seed team in all 132 games in N.C.A.A. tournament history.

Until now, that is.

There is a first for everything it seems and UMBC managed to overcome all odds to go from being the underdog to the outlier overnight in what experts are calling the “biggest upset in college basketball history.”

Before now, UMBC was best known for producing the most African-American students who go on to complete combined M.D.-Ph.D. programs, for winning the National Collegiate Cyber Defense Competition in 2017, and for their chess team. From 1996-2012 UMBC’s chess team won ten out of 16 titles in the Pan-American Intercollegiate Team Chess Championship, and is tied for first place with the most all-time titles. They also have a record six championships in the President’s Cup and went to every final four from 2001-15.

President Freeman A. Hrabowski III is a self-professed mathematics nerd who became a civil rights activist at age 12 in 1963 when he was arrested for marching with Martin Luther King Jr. in the Children’s Crusade in Birmingham, Alabama. “When you think about who we are as an institution and what happened last night, it represents what we tell our students: ‘If you work hard there can be these special moment where you’re moving towards greatness,’” Hrabowski told the New York Times. “The symbolism of last night is that my young men went out there to be the best that they can be, and believe in themselves, against all odds.”

The Month of Miracles

As Jews we know a lot about sudden turn arounds against all odds. We survived Haman and the Persian Empire’s plan to wipe out all the Jews in one day in the Purim story; we defeated the Greeks who outnumbered us 5 to 1 during Chanukah; and more recently the State of Israel withstood three wars waged on numerous fronts against nations and armies many times their number. According to Jewish tradition, however, the prototype of all future Jewish miracles is the story of the Exodus from Egypt.

Ironically, UMBC’s miraculous victory took place on Rosh Chodesh – the first day of the month of Nissan – translated literally as the month of “miracles.” The Jewish people received their very first national commandment on this very day, 3,330 years ago. Shortly before the Exodus, while still slaves in Egypt, the Jewish people were commanded to sanctify the new moon each month, marking the beginning of the new Jewish month. Since the lunar month is 29 ½ days long, the new moon can either be spotted on the 29th or the 30th day of the month. In ancient times, the visible sighting of the new moon by witnesses in Jerusalem determined the beginning of the month and subsequently the date of that month’s holidays.

Based on this it would appear that Judaism follows a lunar calendar. Upon closer inspection, however, that cannot be the case. You see, the lunar year is 354 days long (29 ½ x 12), whereas the solar year is made up of 365 days. If the Jewish calendar were purely lunar, holidays would fall out in different seasons every few years just like the Muslim holiday of Ramadan which travels around the Gregorian calendar. To prevent this, the Torah specifies that Passover must take place in the springtime: “[For] seven days you shall eat matzah as I commanded you, at the appointed time in the month of springtime (aviv), for in it you came out of Egypt . . .” (Exodus 23:15). Therefore a leap month is instituted every few years to ensure that Passover always falls out in the spring. It comes out that while the Gregorian calendar is solar and the Muslim calendar is lunar, the Jewish calendar is a combination of both lunar months and solar years.

Why was sanctification of the new moon the first mitzvah given to the Jewish people and why does the Torah specifically link Passover to springtime? The mystics explain that everything that happens in the physical world is a reflection of something taking place in the spiritual dimension. Although logic dictates that we celebrate Passover in the spring because that’s when the Jewish people came out of Egypt, Jewish philosophy explains that in fact the opposite is true: the Jews were freed from Egypt in the springtime because spring is a time of freedom and rejuvenation. It’s no coincidence that while Jewish families turn their houses upside down to clean every speck of bread crumb, the rest of the world is also engaging in spring cleaning. Subconsciously they are tapping into the energy of rebirth that is present at this time of year.

The same is true with the moon. Although the moon never really changes size, from our perspective on earth, it follows a monthly cycle of change. The Hebrew word for month – chodesh – literally translates as “newness.” The lunar cycle is the physical manifestation of the energy of change. Every month is a new opportunity to renew ourselves and begin a fresh start.

The mitzvah of sanctifying the new moon was the prerequisite to achieving freedom from slavery. Before you can be free, you have to have the ability to change and start over. The book of Ecclesiasts writes, “There is nothing new under the sun.” In the world of nature – i.e. “under the sun” – everything is recycled from the Big Bang. The first law of thermodynamics states that matter is neither created nor destroyed. Things may go from one state of being to another – but nothing is truly new. However, the mystics state, that’s only under the sun. Above the sun – in the world of spirituality – everything is new. On the spiritual level, existence is constantly being recreated from one moment to the next. If one can learn to tap into this power, they can actually recreate themselves.

We often feel enslaved to the past – to our habits, to our past experiences, to the way other people define us. Passover is a time to break free from the past and begin again. True freedom means we can completely transform ourselves in an instant and defy all expectations. Pesach literally means to jump – to jump out of our current mode of being by leaps and bounds into a whole new reality.

When things look bleak, when it appears as if all odds are against you, never give up hope in miracles. Change can occur in the blink of an eye.

Thank you UMBC for teaching us this lesson that miracles can happen when you least expect them – and you can redefine yourself in a split second. Although UMBC was disqualified in the second round against the Kansas State Wildcats, they will go down in history as the first seed-16 team to beat a seed-1. History is made by the few who are willing to stand up against the many despite the odds based on their belief in the power of change.

About the Author
Gavriel Horan currently lives with his family in Baltimore, MD where he works as a campus rabbi, psychotherapist, and freelance writer.
Related Topics
Related Posts
Gavriel Horan
Comments