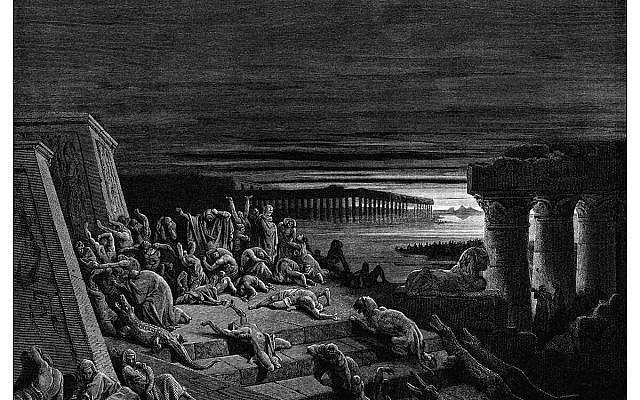 Biblical narratives suffer from a scarcity of objective chronological references.  Identifying the precise time period of events within the context of history or season most often leaves the reader wanting. The exodus is particularly affected by this absence. Beyond the actual moment of the exodus, there is only a single objective temporal reference in the story of the plagues. Yet, this singular mention provides an intriguing insight into the events. While superficially inconsequential, these details at first suggest a logistical dilemma for the colloquial timeline of the exodus. However, ultimately, it provides an even more lucid appreciation for the final moments of the exodus which are otherwise lost in the details.

The great suffering imposed upon Egypt through the plague of barad, hail, was magnified by the destruction of the early harvest when the barley had ripened (Shmot 9:31). Yet, there was still a remnant of hope in the face of impending famine. The late ripening crops such as wheat were unharmed (9:32). The subsequent plague of arbeh, locusts, evaporated all hope for the country’s food supplies as the locusts consumed whatever remained from the plague of barad (10:15). Chronologically, there are only two more plagues before the actual day of redemption on the fourteenth of nisan. Utilizing the objective timing of the early harvest in Egypt informs the reader when barad actually struck the land. Providing the timetable within which the subsequent narrative elements will have had to occur.

The ancient Egyptian calendar is fairly well researched although its alignment with the Gregorian calendar is obviously approximate. For purposes of simplicity, approximate time periods will be used to balance differences in the available sources which deviate up to one month from each other; a pedantic but ultimately irrelevant fact to the conclusion.

The inundation or flood season, akhet, began approximately July and lasted through October. This was monsoon season at the headwaters of the Nile, leading to downstream flooding that covered the arable land with nutrient rich waters. After the flood waters receded the growing season, peret, arrived and agricultural production began extending from approximately October/November to February/March. The harvest season, shemu, spanned March/April through June. An early harvested crop would therefore occur some time early during this season, at earliest March/April, and the late harvest would likely extend to the end of the season, June.

Understanding the agricultural reality of ancient Egypt combined with the objective chronicity of the harvests means that the plague of barad happened at earliest March/April, the same period of time nisan normally arrives. We are then told that ‘what remained’ (10:12,15) was consumed by the arbeh. The text does not reveal the duration between barad and arbeh, nor does it provide more objective information as to the level of ripening for the affected crops. The reader may want to assume that arbeh occurred during the late harvest, however this is not stipulated in the text. All we know objectively is that following arbeh and barad there was enough time for all the dialogue between Moshe and Pharaoh and the plague of choshech, darkness, to transpire before the month of nisan even begins.

According to classical rabbinic opinion, the plagues lasted one year (e.g. ediyot 2:10). Logistically this creates a difficulty for the colloquial timetable of the plagues. If barad occurred too close to the beginning of nisan then there would not be enough time for the final 2 plagues and the other narrative events to occur before the beginning of nisan. Implying that an entire additional year must have lapsed before the exodus actually occurred. This dilemma is not merely a threat to classical rabbinic understanding, it creates an even greater textual contradiction. When Moshe arrived in Egypt he was 80 with his death occurring 40 years later at the age of 120. Since Israel wandered the desert for 40 years, this necessarily implies that the period of the plagues must have taken less than a year.

Integrating these objective components necessarily implies that barad, arbeh and choshech all occurred in rapid succession; likely over the course of 2-3 weeks during the early harvest. This sequence of events is consistent with contemporary agricultural timetables for the maturation of both wheat and barley as well as historical sources such as Pliny. Appreciating the temporal relationship of these final plagues illustrates a frenetic period for the Egyptians. A crescendo of chaos as the plagues began insidiously with inconvenience but finished in a harried atmosphere of impending devastation. The text corroborates this picture as the Egyptian people were keenly aware that their very existence was being directly threatened by these final plagues (10:7).

Following choshech there was an eerie calm. Once nisan arrived, the first 14 days were without activity or plague. While Israel prepared their lambs over these two weeks, the Egyptians enjoyed an uneventful calm. Probably lulling the masses into an optimism that the worst was behind them. Little did they know the true moment of horror to come at midnight on the fourteenth of nisan. Having suffered so terribly for the weeks before nisan, finally tasting tranquility and then in a single moment experiencing the trauma of the final plague must have been exasperating. There was not an ounce of fight left in the Egyptian population to resist Israel’s simple request for vacation (refer to “Moses never actually said ‘Let My People Go’” for details).