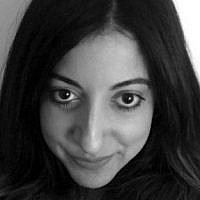 The Blogs
Berenice Famili
Apply for a Blog
Advertisement
Please note that the posts on The Blogs are contributed by third parties. The opinions, facts and any media content in them are presented solely by the authors, and neither The Times of Israel nor its partners assume any responsibility for them. Please contact us in case of abuse. In case of abuse,
Report this post.

We’ve dipped our apples into honey, munched on pomegranate and dates, and wished our loved ones a Shana Tova in celebration of the New Year ahead.

To continue rejoicing the sweet year upon us, it seems fitting to celebrate Jewish brands that are greatly impacting Jewish culture through embracing and creatively serving the Jewish community. Here are the 4 Jewish Brands to look out for in 2019. 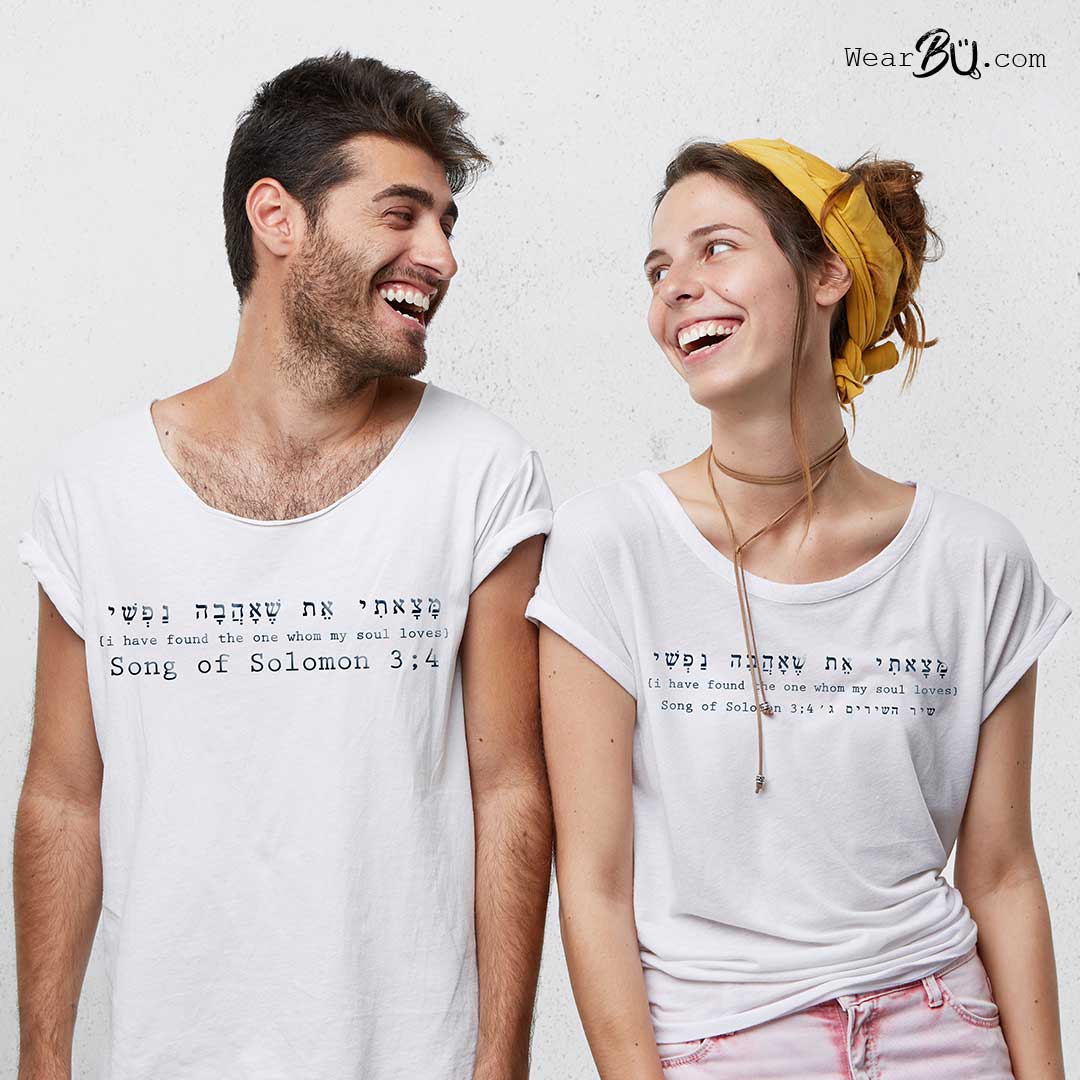 For all the fashionistas out there, the Rachel Zoe saying “Style is a way to say who you are without having to speak” resonates deeply. But, what if you could fully express yourself through creatively written text on a t-shirt? Enter in Wearbu, a newly launched graphic t-shirt line with a meaningful and unique edge.

“My designs are intended to encourage the ability to live ‘out there,’ fully self-expressed, and show others how you feel in a kind and non-offensive way,” says Wearbu founder May Katz.

“I want to help people speak their truth and a graphic t-shirt is a great way to do that by allowing others to see how you feel and who you are” Katz explains.

Katz, who decided to separate her designs into two main categories including faith and inspiration, describes every shirt as an adventure that captures a moment of life bottled and preserved in a cotton tee.

As a woman of Jewish faith living in the center of the Bible Belt (Dallas, Texas) with her loving husband and two kids, Katz draws inspiration from her deep love of family and faith.

“I believe that family is the most important thing in life and should be deeply cherished. My designs focus on positively nurturing our relationship with each other, with God, and with the world so that we can show the love shared and our sense of belonging,” says Katz.

Some of Wearbu’s most powerful designs come from both the Old and New Testaments alike where Katz combines her Jewish roots and Christian surroundings. By featuring Scripture t-shirts with both English and Hebrew bible verses that read “I Am My Beloved and My Beloved is Mine” or I Have Found The One Whom My Soul Loves,” Wearbu profoundly delivers an opportunity to spread love and faith.

But, what makes Wearbu extra special is that it goes beyond being a singular faith-based brand of Jewish and Hebrew t-shirts.

Each t-shirt design is created in a way that will help people express themselves no matter who they are and what they believe in, with faith being one of the main building blocks.

Wearbu designs display a form of self-expression where all beliefs are shared in a positive way. All religions are embraced.

“My designs are rooted in acceptance and positivity. We are accepting each other and expressing ourselves,” says Katz.

So, if you’re looking for a way to express yourself while upping your wardrobe with a combination of deeply impactful and uplifting graphics, Wearbu is the way to go. 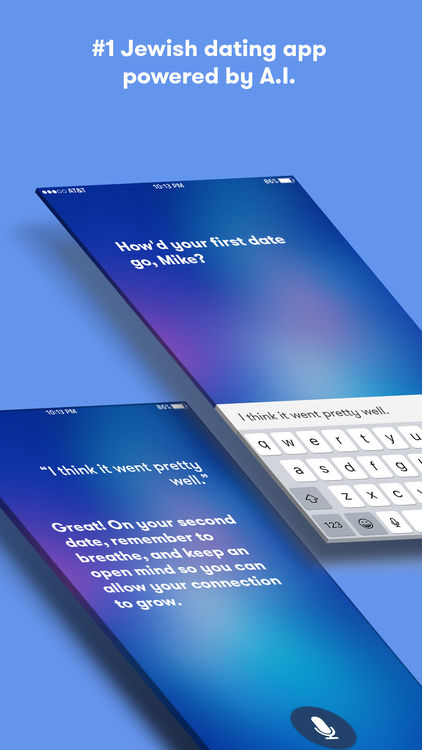 Before the creation of Forje, the Teichmans decided to research what tools are available to be able to move forward in dating.

“We met with a couple of top experts in the field and conducted research, which they reviewed, critiqued, and honed. This led to how we were able to create Breakthrough Dating, a program designed to give singles the tools they need to get ‘unstuck,’” Yossi explains.

The duo created a small event and out of 40 people who applied the program, four ended up getting engaged. “Since then, we had 41 marriages,” Yossi says.

Three main themes derived from the Teichman’s research that they discovered are critical to dating success: “vision, empowerment, and connection.”

While Shira’s client base grew at Breakthrough Dating, she noticed that her clients kept reiterating how tired they were of dating apps, since all it was to them was a picture.

Yossi, in particular, noticed that within the last two to three years there has been more pushback where people are just completely fed up with dating apps and they say, “I’m meeting millions of people but nothing is happening.”

This sentiment triggered the motivation behind creating Forje. The pair immediately decided to integrate their research seamlessly into an app where Jews no matter what background, age, degree earned, etc. can actually meet someone who is truly compatible in a safe space, and receive the support they need to find their match.

What truly makes Forje different from other dating apps is its use of Artificial Intelligence to help support Jewish singles who are searching for something lasting and authentic. A thorough sign-up questionnaire process gives the opportunity for Forje’s A.I. to understand the user, the user’s personality, interests, preferences, and values. From there, Forje works to synthesize the user’s responses and identify best matches.

“Our questionnaire process is very personal, extensive, and really gets to know the user, something that is uncomfortable if you just want a hook-up,” Yossi states.

The groundbreaking A.I. of Forje is additionally built to detect patterns and can identify catfishing and ghosting. The extensive sign-up process further eliminates those who want to catfish by requiring users to scan their driver’s license and compares the information from Facebook or Google when the user makes a profile. All personal information is deleted and never shared once the app has confirmed the individual is not an impostor, Yossi says.

“We are also incorporating chat analytics that will allow users to see the chat patterns of other users and will show which are ghosting,” Yossi explains.

In 2019, Forje users can look forward to a slew of new features including dating spot suggestions, an A.I. dating coach, icebreakers, and more chat analytics. 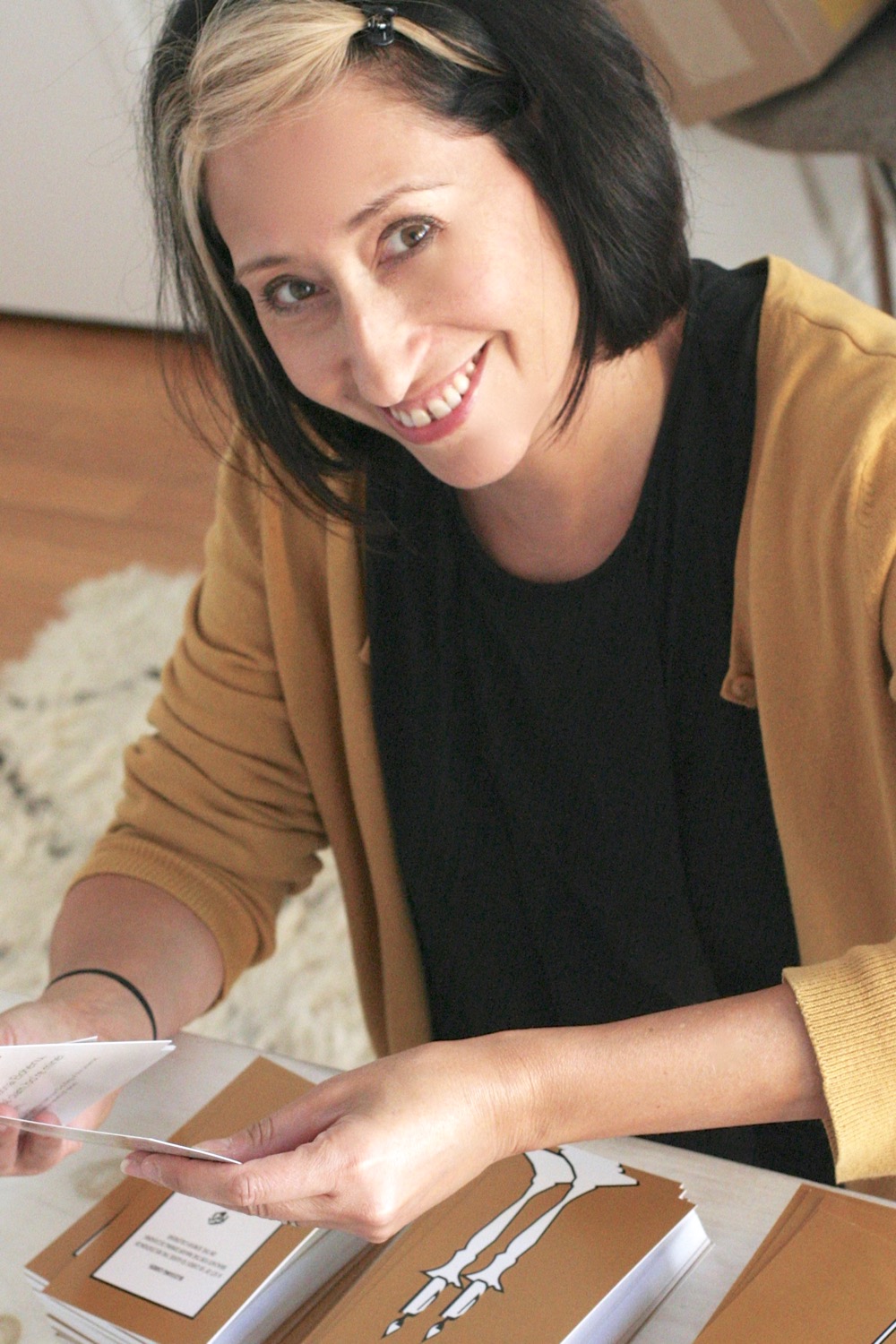 Have you ever wondered if a Martha “Jewart” existed? Well, thank Dena Siegel, the mastermind behind Chai & Home, a paper and party goods retailer and lifestyle publisher founded on the concept of creating the premier Jewish authority on homemaking.

Siegel says that the idea to create Chai & Home came out of a conversation she was having with a Jewish friend who celebrated Christmas.

“I asked her why she did that and quite sheepishly she responded, ‘Because I like the smell of pine.’ Then, she quickly defended herself by saying, ‘Well, it’s not like there is a Martha Jewart out there to show me how to do the Jewish holidays,’” Siegel recalls.

Siegel explains that it was this moment that they both realized that there was no Martha Jewart and there should be one. Hence, Chai & Home was born.

Chai & Home’s distinctiveness stems from the breadth of topics covered, which includes the entire spectrum of Jewish homemaking: entertaining, cooking, decorating, and crafting.

“Everything is done with a high standard of execution and non-denominationally. The latter is very important to us as we want Chai & Home to be a resource for anyone interested in a ‘Jewish Life, Beautifully Lived’ which is our motto,’” says Siegel.

It’s a motto Siegel has already achieved based on data researched and collected that shows Chai & Home readers range from Orthodox to Cultural Jews.

“The Chai & Home product line is also very different from other Judaica because we have a very modern look and are at a price point that is much more affordable,” Siegel explains.

“Our product intention is very different as well – instead of buying Judaica as a gift for someone else, we sell staples you want for your own observance,” states Siegel.

Some of the products include meaningful items such as Jewish calendars with the wisdom of the Talmud, humorous Jewish greeting cards, beautifully designed party & holiday supplies, and so much more.

Siegel emphasizes that the goal of Chai & Home has always been to motivate people to celebrate their Jewish heritage.

“Our aim is to show that Jewish life and celebrations don’t have to be painful and serious, but are just as beautiful and joyful as any other tradition out there. Chai & Home accomplishes this by pumping out as many beautiful pictures of Jewish life as possible. That’s our elixir – and it works! I get so many emails from people telling me they made this recipe or that craft project, often celebrating something for the first time. It is so validating,” Siegel says.

In 2019, Chai & Home fans can look forward to a new hamentashen recipe, a slew of new products lined up in several new categories, and there will even be something for people like Siegel’s friend who loves the smell of pine…but for Tu b’Shevat! 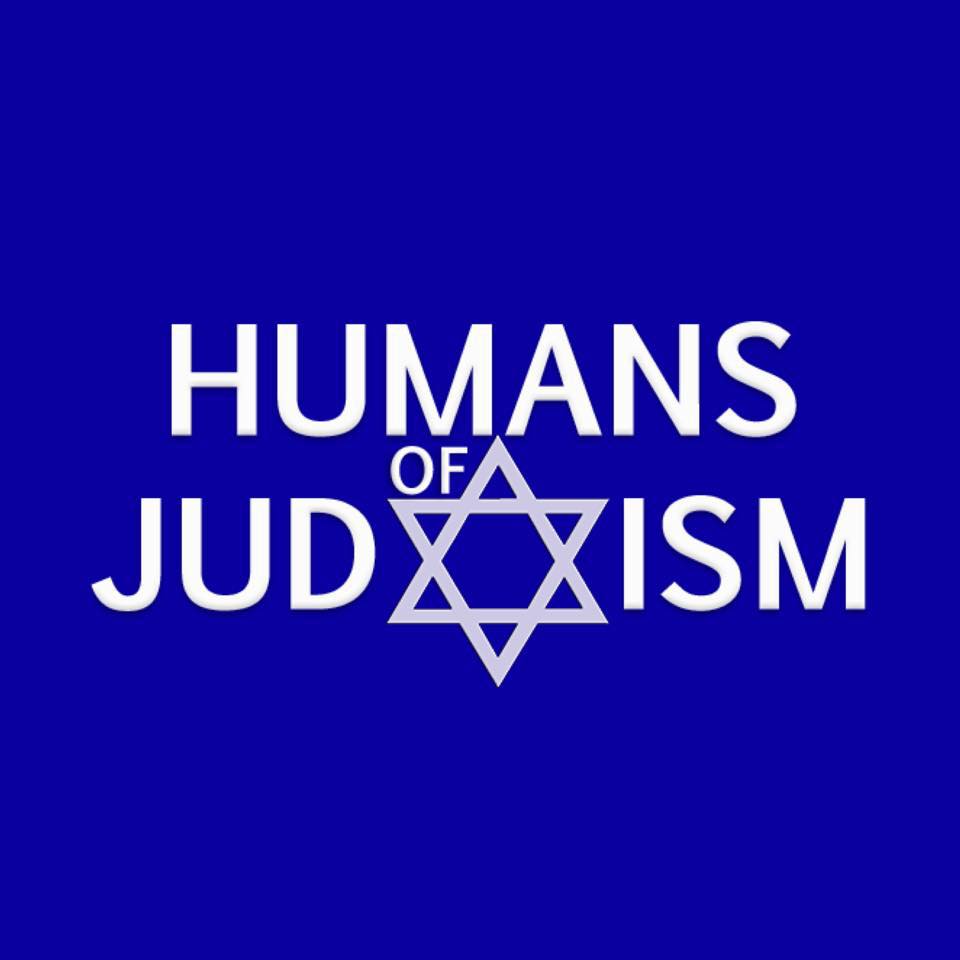 We all need a source that helps uplift our souls and spread optimism. Human of Judaism does just that and more by creating a positive environment on social media through presenting the good in our community, the humanity of each Jew and its supporters.

Humans of Judaism founder Nikki Schreiber created the Jewish media brand on June 10, 2014, an idea that grew after mourning the sudden death of her father in November 2013. She wanted to do something in honor of his memory and so Humans of Judaism was created.

The Humans of Judaism page grew a lot of its traction after the kidnapping of three boys in Israel on June 2015 and the outbreak of Operation Protective Edge.

“The entire Jewish community was looking for something – looking for strength, comfort, and unity. In no time, more and more people were finding the page and liking the posts and submitting their own stories for consideration,” Schreiber says.

As one of the global pioneer Jewish media brands, Humans of Judaism has over 100k followers each on Facebook and Instagram. The brand offers a plethora of content on Jewish heroes, commemorates precious lives lost in terror attacks, celebrates Jewish weddings and provides content covering Torah teachings and values.

Humans of Judaism has expanded its reach through Sparks of Judaism (originally Daily Spark) which offers “a daily spark” of Torah and positive thinking. Schreiber also created the Memes of Judaism account that features a slew of hilarious Jewish memes and graphics.

So, if you’re ever looking for a platform that offers a daily dose of Judaic humor, culture, and values, Humans of Judaism has got you covered.

About the Author
Berenice is the CEO and founder of the Jewish emoji app Shalomoji. She also runs the Shalomoji blog where she interviews Jewish influencers to help inspire newbie entrepreneurs
Related Topics
Related Posts
Comments