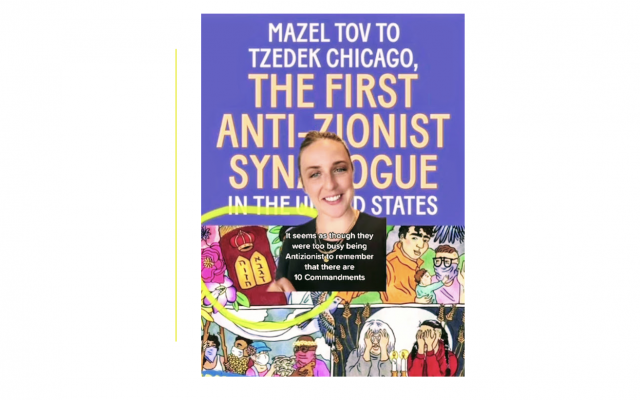 Recently in the Forward, I read about this “synagogue,” Tzedek Chicago, that has the tragic distinction of being the first anti-Zionist synagogue in America. They claim that they are all about justice, as their name “Tzedek” supposedly implies, and as their website values states:

…the creation of an ethnic Jewish nation state in historic Palestine resulted in an injustice against the Palestinian people, an injustice that continues to this day.

However, the facts do not match the rhetoric. Anti-Zionism, regardless of the source is ultimately about Jew hatred.

Disingenuous claims of justice exist all throughout history.

Highlighting their ignorance about basic Judaism, there is also a funny-sad Instagram reel from @margoexplainsitall poking fun at their portrayal of a photo of the Ten Commandments, only this set had just eight. The sad part of this is that it fits their rejection not only of their fellow Jews and Israel, but of the very Torah that states (Deuteronomy 30:5):

The L-rd your G-d will bring you to the land of which you fathers took possession, and you shall take possession of it, and He will do good to you…”

Moreover, the famous Jewish scholar and kabbalist, the Ramban, writes in his commentary on Maimonides, Sefer Hamitzvot (quoted here):

We are commanded to inherit the land that the Almighty gave to our forefathers Abraham, Isaac, and Jacob. and not to leave it in the hands of other nations or desolation, as it says, ‘Inherit the land to live in it, since it is to you that I am giving the land to occupy…’ (Numbers 33:53)

Where is the justice in that?

When Tzedek Chicago calls Israel the “historic Palestine,” I can only wonder how they so easily overlook the many travels to Palestine in the 1800’s that found the land desolate and nearly without any person. Recall the famous American writer, Mark Twain, who stated in 1869:

Palestine sits in sackcloth and ashes. Over it broods the spell of a curse that has withered its field and fettered its energies…in whose bitter waters no living thing exists…about whose borders nothing grows but weeds…

Further, unlike the Palestinian Authority, Israel is a land of freedom, democracy, and diversity. More than half the world’s Jewish population lives in Israel where Arabs serve in the IDF, are members of the Knesset, and even serve on the Supreme Court.

While this misguided congregation may think they are showing compassion, this is not justice. Indeed, they embody the saying:

Like King Saul who had mercy on the Amalekites, the historic enemy of the Jews, and he saved their king contrary to G-d’s commandment, Tzedek Chicago cries for the Palestinians! Yet, it is the Palestinians who have repeatedly rejected every peace overture from the U.N. Partition Plan to the Camp David Accords and beyond. They demand the total annihilation of the Jewish people “from the river to the sea.”

Seventy-seven years after the Holocaust, it is sad and unfortunate that any Jew can find justice in that.