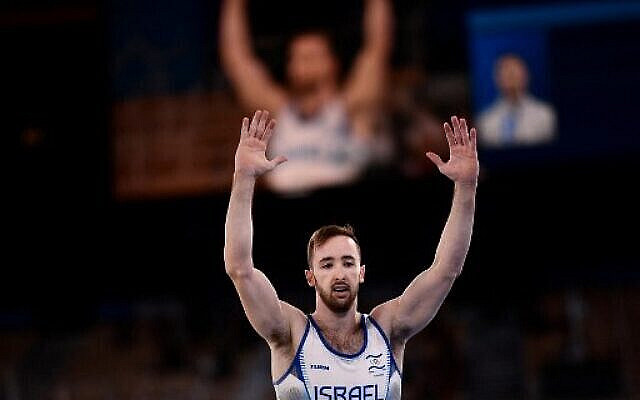 When someone like Artem Dolgopyat has grown up his entire life as a Jew and as an Israeli, the nuts and bolts of Judaism are part of his cultural upbringing. For this reason alone, the process for conversion should be substantially shortened…

Backing his contention for Artem’s right to an express conversion, Rabbi Leiter invokes the unconventional concept of Zera Yisrael (“Jewish pedigree” – a person with a Jewish father and a non-Jewish mother) and proceeds to assert that since Artem is of Zera Yisrael, he already has “a Jewish soul but this process (of conversion) is a legal technicality that has to be done to make it (his Jewish status) official.”
Whoa! We need to take a step back here – or, more like it, we need to go back a few miles, all the way to step zero, as Rabbi Leiter leaps over the essentials of what Jewish status and conversion are, thereby arriving at a very flawed conclusion.
Firstly, the idea of Zera Yisrael is a novel and exotic mystical concept, which is not found in any primary Jewish legal sources, and which is not accepted by mainstream rabbinic authorities of this generation or of any previous generation. It is an otherworldly idea with no halachic recognition or force, and it hence has never been used or even suggested to serve as the basis for less meticulous and substantive conversion procedures. As stated in the Talmud (Kiddushin 66B) and codified by Maimonides (Hil. Issurei Bi’ah/Laws of Forbidden Relations 15:4) and by the Shulchan Aruch/Code of Jewish Law (Even Ha-Ezer 8:5), all without dissent, the child of a non-Jewish woman is a non-Jew – period. These paramount and controlling sources of Jewish Law do not describe such an individual as partially Jewish or as a Jew absent a technicality. Furthermore, nowhere do the Talmud or the halachic codes in their presentation of the laws of conversion provide any type of dispensation or abbreviated conversion process for one who is Zera Yisrael.
Hence, were Artem to convert according to Halacha/Orthodox Judaism, he would need a full, traditional conversion.
What does a full halachic conversion entail, in contrast with the process that Rabbi Leiter endorses for Artem and others in his position?
The answer is acceptance of the Commandments: a convert must be taught the basic rules of the Torah – the Commandments – and must accept to abide by them. (Talmud: Yev. 47B; Maim. Ibid 13:4,14; Shul. Aruch – Yoreh Deah 2-3) Although Artem is a proud Israeli who has served his country and who presumably has a basic cultural familiarity with Judaism, he would not be able to undergo a halachic conversion without accepting upon himself the Commandments and living as a Jew who adheres to Halacha. This is a clear requirement in Jewish Law. As Rabbi Joseph B. Soloveitchik of Yeshiva University explained, acceptance of the commandments is the very essence of conversion to Judaism.
Some people might think that conversion is a form of ethnic or national identification with “The Tribe”, like one who becomes a new citizen of a different country, or that conversion is akin to a type of club membership or party affiliation; in Halacha, this is not at all the case.
Rabbi Leiter’s eagerness to convert Artem with no acceptance of the Commandments and no commitment to conduct a halachic life is contrary to the most basic teachings of the Talmud and the halachic codes, and would not qualify as an Orthodox conversion by any definition.
Two more points cannot be overlooked.
The Zera Yisrael concept, when radically applied to conversion, serves in large measure to validate the Reform movement’s innovation of patrilineal descent. By arguing that people like Artem, who derive from a Jewish father and a non-Jewish mother, really have Jewish souls and are Jews for all practical purposes, absent a “legal technicality (of conversion) that has to be done to make it (his Jewish status) official”, Rabbi Leiter comes pretty darn close to the Reform policy of accepting people born to Jewish fathers and non-Jewish mothers as Jews. Rabbi Leiter requires a mere “technicality” to be performed, with no commitment or training on the part of the convert, while Reform clergy skip this mere “technicality”. The difference between the two approaches is not major, as they essentially maintain that a person born to a Jewish father and a non-Jewish mother is Jewish – in contrast with the Talmud and all halachic codes, which clearly and without exception rule that such a person is not Jewish.
There is a further halachic hazard here – an elephant in the room, as it were.
Rabbi Leiter shares with us that:

For some time now, I’ve served on an independent Beit Din that has no connection to the (Israeli Chief) Rabbinate. We convert men and women such as these on an expedited basis; the reason for this is obvious. These Israelis, for all intents and purposes, are Jewish. Some may not even know they are not halachically Jewish until much later in life. When they come before our Beit Din we tell them that they have a Jewish soul but this process is a legal technicality that has to be done to make it official. Many of our converts come to our Beit Din so they can get married…

It would likely enable potential converts, especially among Russian-speaking relatives of Jews who immigrated from the former Soviet Union, to bypass any state rabbi who refuses to convert them and find a rabbi who will.

This means that Rabbi Leiter’s independent Beit Din, which provides expedited conversions lacking core and indispensable halachic requirements, would be recognized by the Israeli government’s Ministry of Religious Affairs, and those who convert under Rabbi Leiter’s auspices would be registered as halachic Jews, even though the policies of Rabbi Leiter’s independent Beit Din are not in accordance with Halacha and are rejected by every mainstream Orthodox rabbinic body the world over.

Artem is more than welcome to convert according to Halacha. His lack of interest in doing so, and Rabbi Leiter’s eagerness to instead offer a quickie conversion, send some pretty serious messages to those of us who are committed to the halachic integrity of Jewish identity in the State of Israel.