“If we had two hearts like we have two arms and two legs, then one heart could be used for love and the other one for hate. Since I have but one heart, then I don’t have the luxury of hating anyone.”  — Reb Shlomo Carlebach

To view a collection of these programs – Press here

Hope you can join us all. Please share with your friends and family

There is so much much need for Unity – Achdut today which is highlighted in this extract from Dr. Natan Ophir in his biography of Reb Shlomo.

Background: Reb Shlomo visited Poland in January 1989 as the first religious Jew to perform in Communist Poland. His trip was documented by R. Sammy Intrator and videoed by Menachem Daum. The live footage captures the unique experience of the Polish people and shows how this concert tour became a breakthrough in altering stereotypes and breaking down animosity. Reb Shlomo responded to the Holocaust by stressing how every individual can become God’s partner in fixing the world and replace anger with love and joy: “After the Holocaust it’s so easy to be angry at the world, and it’s so easy to condemn the world. But we have to continue to love the world. The most important thing today every person has to do is to cleanse their hearts from anger and fill the heart with a lot of joy”.

In Majdaneck, Reb Shlomo said: “On the one hand, I cannot forget what happened in Europe. On the other, I know that I have to help rebuild a new world.” He explained that he was bringing a unique message of religious Jewish Orthodoxy. Precisely because Poland is the site of extermination camps, “that’s the very reason that it makes Poland a prime choice for change.” Shlomo explained that honoring the six million entails returning to their burial grounds and swearing to them “that we shall dedicate ourselves to spreading their values and their dreams to the entire world.”

Shlomo developed a boldly conciliatory approach of love towards the Polish people. When challenged how he could shake hands and even hug children of the perpetrators, he replied: “If we had two hearts like we have two arms and two legs, then one heart could be used for love and the other one for hate. Since I have but one heart, then I don’t have the luxury of hating anyone.” 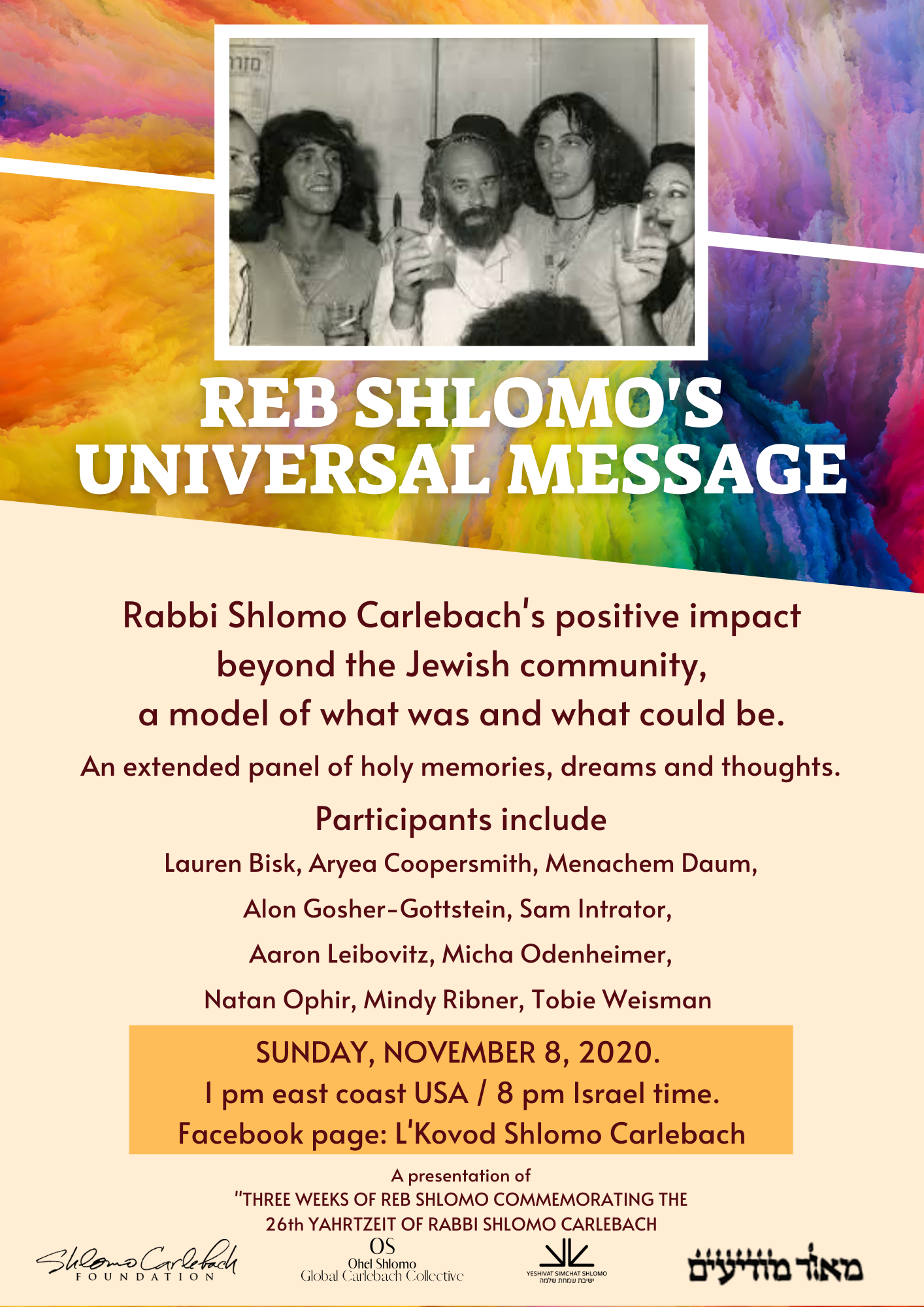 Lauren Bisk is a Licensed Clinical Psychologist in private practice in NYC. She would also like to take the opportunity to thank all those involved in this program for all your work bringing these wonderful events to fruition.

Aryea Coopersmith is author of Holy Beggars, a memoir of how, as a young college student in San Francisco in the 1960s, he met Reb Shlomo, helped him start and run the House of Love and Prayer — and how people’s lives were changed forever.  Today as a retired Silicon Valley business owner, Aryae and his wife Wendy convene the Torah Circle (at torahcircle.org) for weekly Torah study that is open to everyone, where “the circle is the rebbe.”

Menachem Daum is a documentary filmmaker and son of Holocaust survivors.  In January of 1989, he filmed eight historic concerts throughout Poland in which Reb Shlomo tried to use music and joy to heal the deep-seated animosity between Jews and Poles left by the Holocaust.

Alon Goshen-Gottstein is a rabbi and scholar of Jewish studies and director of the Elijah Interfaith Institute in Jerusalem, that brings together premier world religious leaders for sharing wisdom across religions. Shlomo’s universal message is therefore germane to his ongoing concerns as he bridges Judaism and world religions.

Sam Intrator was Reb Shlomo’s assistant for many years and after Reb Shlomo‘s passing he served as the rabbi of the Carlebach Shul for several years. He currently heads KavanahLife a Miami Beach-based organization that runs programs to raise spiritual consciousness in prayer and ritual, and more recently has run several large singles retreats throughout the United States. He is a gentle driving force behind the Ohel Shlomo Global Carlebach Collective, the creators and producers of this program.

Aaron Leibowitz is the rabbi of the Vaani Teffilah community in Nachlaot, Jerusalem, known as Raz’s shul for its founder and previous rabbi Rabbi Raz Hartman, and is also the founder and CEO of ‘Hashgacha Pratit‘, an organization that broke the monopoly of the Chief Rabbinate of Israel over Kosher Supervision. His new project, ‘Chuppot’, challenges the monopoly by providing Orthodox weddings independent of the Rabanut. Rav Aaron served as a Jerusalem City Council member in the previous term, representing the pluralistic Yerushalmim party, and holding the education portfolio.

Micha Odenheimer was a close student of Rabbi Shlomo Carlebach from 1982 until his passing in 1994. He has semicha from Reb Moshe Feinstein, alav hashalom, and is a writer, journalist, and social activist, living in Jerusalem since 1988. Micha is the founder of the Israel Association for Ethiopian Jews and of Tevel b’Tzedek, an Israel based non-profit which has worked for subsistence farmers in Nepal, Haiti, Burundi and Zambia.

Natan Ophir (Offenbacher) published two books and several articles about Reb Shlomo’s life and legacy. He is an ordained rabbi and PH.D.

Nehemia Polen is Professor of Jewish Thought at Hebrew College, Newton Center, MA. A leading expert in Hasidism and Jewish thought, his books include The Holy Fire: The Teachings of Rabbi Kalonymus Kalman Shapira, the Rebbe of the Warsaw Ghetto, and in 2017 published a essay on Reb Shlomo’s teachings in the context of his life and work that was included in the book “What Do We Know? The Carlebach Anthology.”

Melinda Mindy Ribner is the author of The Secret Legacy of Biblical Women and five other books. A teacher of Jewish meditation for 30 years, Mindy is also a psychotherapist in private practice.  A long time disciple of Reb Shlomo from 1976-1994, she received semicha directly from him to do her unique holy work.

Tobie Weisman is the Founding Director of the Yearning for Learning Center for Jewish studies, a learning center founded to bring Rabbi Sholom Brodt z’l and other teachers connected to Reb Shlomo to Vermont to teach the “deepest of the deep” teachings of Yiddishkeit.  She also is the Founding Director of PJ Library in Vermont, a family engagement program for families 0-12 throughout Vermont and lives in Montpelier VT with her husband David and two daughters.

Yaakov Kellman (moderator) has been a chaplain in NY state prisons for over three decades and, during the last few years of Reb Shlomo’s life, he and his wife Lisa were honored and privileged to host Reb Shlomo multiple times each year. He received semicha from Reb Shlomo, regularly teaches Torah to Christians and organizes trips to Jerusalem, officially represents the NY Board of Rabbis to the NY State Department of Corrections, mentors Jewish chaplains from all denominations and is actively involved in numerous multi-faith activities. He currently resides in Albany, NY and is a gentle driving force behind the Ohel Shlomo Global Carlebach Collective, the creators and producers of this program.