The Blogs
J.J Gross
Apply for a Blog
Advertisement
Please note that the posts on The Blogs are contributed by third parties. The opinions, facts and any media content in them are presented solely by the authors, and neither The Times of Israel nor its partners assume any responsibility for them. Please contact us in case of abuse. In case of abuse,
Report this post. 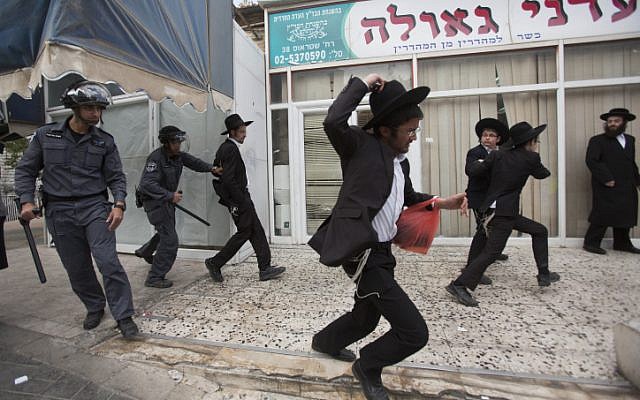 In the early 1950s a laudable program was created to enable a handful of highly qualified and supremely dedicated young Torah scholars to avoid army service in order to devote themselves to serious scholarship. Over the years this has devolved into a rampant scam whereby tens of thousands of idlers, shirkers and off-the-grid wage earners now ‘learn Torah’ in order to avoid the army.

In the haredi world it is considered a G-d given entitlement for haredi men to do no service, shirk work, and take money from the taxpayers of a Jewish state in which they do not believe. The unspoken justification for this is that theft from a non-Jew is permissible, and that Zionists are, for all intents and purposes, fair game.

Unfortunately, in this scam they have been aided and abetted by the major political parties – chiefly the Likud under the leadership of Benjamin Netanyahu – who are willing to pay increasingly huge blackmail into the hands of the haredi parties and their yeshivot in exchange for a parliamentary majority that will vote as told on all issues not related to haredi interests.

That many, if not most, haredim only show up in their yeshivot on payday has long been an open secret in the haredi street. And even the casual observer cannot fail to notice that legions of haredi young men are engaged in jobs when they are supposed to be sitting and learning, while even greater numbers amble shiftlessly on the streets clutching cigarettes and cellphones. Anyone who has visited, for example, Kiriat Sefer – a township supposedly inhabited exclusively by Torah scholars – at mid morning, would find himself amidst a battalion of layabouts wandering the streets, smoking Marlboros, and talking anything but Torah on their ubiquitous cellphones.

Hence, belatedly – but better late than never – the Education Ministry recently decided to clamp down on fraudulent enrollment of yeshiva students by simply visiting these institutions to see who, in fact, is actually there (not that being there there means one is really learning).

This has unleashed a vitriolic hue and cry on the part of haredi political kingpin United Torah Judaism MK Moshe Gafni.

Already in 2016 the IDF managed to revoke the exemption of 4,000 fraudulent yeshiva students, a mere drop in the bucket but a start nevertheless. But now, the Education Ministry wants to take matters in hand and really find out who is legitimate and who is not. This infuriates Mr. Gafni and, no doubt, the power rabbis to whom he is beholden and who control the huge barrels of political pork which are distributed among their minions (and minyans).

To validate his manufactured fury, Gafni argues that the public would be outraged if investigators were sent to secular institutions of higher learning to see who is attending class. But any such grounds for comparison is absurd. University students, unlike yeshiva students, must pass rigorous qualifying criteria before they are accepted to universities. University students must take regular exams, submit research papers and meet precise qualifications in order to graduate. (And university students who are absent from class are, often as not, doing miluim army reserve duty.) There are no such exams or qualifiers for yeshiva students. And there is no such thing as graduating, ever. And finally university students have to pay from their own pocket in order to attend university. Yeshiva students have their hands in the pockets of the taxpayer from which they ‘get paid’ in order to meet no criteria of any kind in their open-ended scam.

Should there be yeshiva students exempted from the military? Absolutely! Just as we exempt geniuses in other fields so that they can enhance the quality and caliber of our nation. But the fraud has to stop. Attendance inspections are a good start. But there should also be regular, standardized, objective testing to determine who is actually learning and who is not. Those who pass muster should be allowed to continue. Those who do not can start by cleaning the army’s latrines. Honest labor like the prohibition against theft are both part of the Ten Commandments. One need not be enrolled in a kollel – or serve as a haredi MK – to know this.

About the Author
J.J Gross is a veteran creative director and copywriter, who made aliyah in 2007 from New York. He is a graduate of the Hebrew University in Jerusalem and a lifelong student of Bible and Talmud. He is also the son of Holocaust survivors from Hungary and Slovakia.
Related Topics
Related Posts
Comments