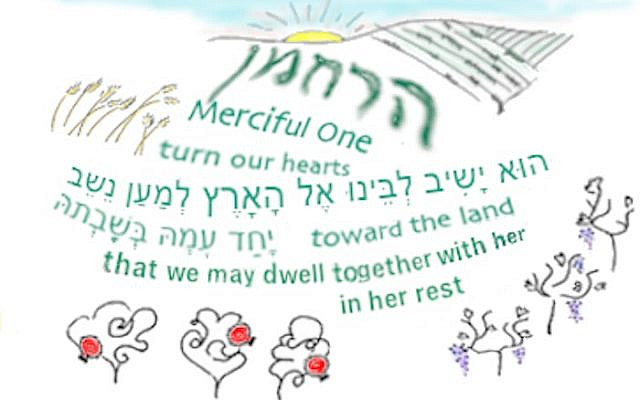 I. As we come to the end of Leviticus, we read about shmitat karka’ot, the agriculture Shmitah (Sabbatical year) of releasing the land and giving the land a year of Shabbat. For two parshiyot, the portions of Behar and Bechukotai, the Torah teaches the laws of letting the land rest and the consequences of failing to let it rest.

Behar is the climax of Shmitah in the whole Torah. But two more important Shmitah moments are coming up soon after.** The first is Parshat Bemidbar, the following shabbat, when we begin to read the book of Numbers. This year, we read Bemidbar on the 42nd day of the Omer. According to the flood story, the 42nd day is the day when Noach and all his relations (i.e., his family plus all the animals) received the Rainbow covenant, on the 27th of the second month (Gen 8:14, Gen 9:12-13). (In my community we now call this Rainbow Day.) The flood has everything to do with Shmitah.

Shavuot is the next moment to teach and learn about Shmitah. Parshat Behar happens specifically “on Mount Sinai / behar Sinai” (Lev 25:1). The emphasis on Sinai hints that the Shmitah year is the culmination and purpose of the Sinai covenant.

The Torah of Shmitah is the path to creating a just world, by resting with the land. It is the Torah we need to survive to fight global climate disruption. How, though, does the flood connect with Shmitah, and how do we know for sure that the purpose of Sinai is bound up with Shmitah?

II. The details: Eden is represented as a place where people don’t work the land and don’t need to work the land, a place where they share food equally with all the animals. Leaving Eden, all this changes (Gen 3:18-19), beginning a downward spiral for humanity and Creation.

The flood story is the culmination of that degeneration. The flood begins because, as the Torah tells us *seven* times, humanity’s חמס chamas and רע ra, violence and evil, are corrupting and ruining the land itself. According to the Torah, the problem is not described as an intrinsic problem of violence, but rather as a problem because of what this violence does to the land. (The Genesis-Shmitah text study sheets on neohasid.org will help you see this in detail along with the whole pattern – the seven times mention of the land is in section IV.)

The flood ends with God declaring that the connection between humanity and the land has been torn asunder (“I will no longer add anymore to cursing the ground for the sake of humanity” ~ Gen 8:21), while the relationship between people and animals is ruined (instead of the way it was in Eden, when Adam would call to the animals and they would come straightaway, now “terror and dread of you will be upon all the animals” ~ Gen 9:2). (See section V in the text study sheets.) It is no mere detail that the first covenant is not with humanity but between God and all flesh / all the animals, and between God and the land (Gen 9:10-16). Humans are out of the picture as far as divine providence is concerned.

(The Tower of Bavel is a coda to that cataclysm – the humans refuse to disperse through and connect to the land, meaning they are refusing to do t’shuvah to repair their relationships with the land and with God, instead congregating around a tower that lifts them away from the land. Understandable after the trauma of a world flood, but not the way to repair the world.)

Avraham was the beginning of the story of fixing those relationships. Though God has given up on humanity, Avraham tempts God to try to re-establish a right relationship between just one family and just one land. The divine intent is clear: if this family can make it right with this land, they can become a model for all humanity, kol mishp’chot ha’adamah (Gen 12:3). But this process needed to unfold over many centuries, through the descent down to Egypt and enslavement, the exodus from Egypt, and the revelation at Sinai, in order to bring a new human-earth relationship to life.

Sinai is the place where we learn about Shmitah, the plan to create that model society. Instead of agriculture that destroys the land and leaves it barren, as happened in Mesopotamia, the new society will practice radical rest, in order to create equality and justice for people and a kind of agriculture that renews and redeems the land.

In the Shmitah year, not only is the relationship between humans and the land rectified, fixed, and reset. The relationship between humans and the other* animals, is also fixed. That is why, every time agricultural Shmitah is mentioned, scripture specifies that the wild animals must also have access to the produce that grows on its own in the fields (Exod 23:11, Lev 25:7). That is why the division between human spaces and wild spaces is broken down by taking down fences (Rambam (Maimonides), Mishneh Torah).

These are all signposts of returning, temporarily, to a way of being that is closer to Eden (see “Shmitah: the purpose of Sinai”). As in Eden, humans and the other* animals share food and land equally. Once we successfully observe Shmitah, the Torah tells us that the relationship with God will be fully restored (“I will become your God and you will become My people” ~ Lev 26:12).

III. That is also why not observing Shmitah leads to punishments that unravel the relationship between people and land (and between people and the other* animals), leading ultimately to exile. Exile is presented not just as a punishment, but also as a time for the land to recoup her sabbaths (Lev 26:34, Lev 26:43), and a chance for the people to recoup their purpose, so that they can return to complete the mission: to create a new and better relationship with the land (Lev 26:42). (See “Walk with Me” and “The Third Promise”.)

However, when this vision had the chance to come to fruition, when the Israelites came into the land – it didn’t. In this sense, the trauma of the flood has never ended, and its fixing is yet to come.

According to Chronicles (in the name of Jeremiah ~ 2 Chron 36:12), because the Israelites didn’t properly observe Shmitah, they were exiled from the land seventy years, for the seventy Shmitah years they missed. Even that wasn’t enough correction – though the exiles returned, we are still waiting until this very day to fulfill the covenant and mission that the Torah gave us, the mission to create a right relationship between humanity and the land.

That relationship is one not based on ownership and control, but on giving and receiving, on equality between people, and on fairness between species. That relationship was rooted not just in the covenant, but also in the ecology of the land Avraham was brought to, the land of Canaan/Israel/Palestine where . In Canaan’s ecology, water depended on the heavens and could not be controlled – the opposite of the ecology of Mesopotamia, where Avraham came from. (See “The ecology of Canaan”.)

IV. Beyond Rainbow Day, there is another deeper connection to Bemidbar, the book of being “in the wilderness” (the meaning of the word “Bemidbar”) and Shmitah. The reason the Torah is given in the wilderness, according to midrash, is that wilderness is by definition הפקר hefker, ownerless. Similarly, no one can own the Torah, which belongs to the whole world (Numbers Rabbah 1:7). In the same way, in the Shmitah year, we treat all the land as ownerless (Rashi, Rambam) because, as parshat Behar teaches, no one can own land. We affirm this by letting the land rest and declaring that everything that grows is also hefker, ownerless.

The midrash also tells us that no one can truly receive Torah unless they make themselves hefker, ownerless (Numbers Rabbah 1:7). What does that mean? That is the subject of a lifetime of spiritual practice – but one thing it means is that we must love our neighbors the way we love ourselves (b.Sanhedrin 49a). Loving is not about controlling – and likewise, loving the land is about releasing it, not controlling it.

This is a fundamental lesson of Shmitah. Land cannot be loved through violence or theft, whether through squatting and harassment (like the settlers in the South Hebron Hills who attack Palestinian farmers) or through military power (as is also happening south of Hebron, where the High Court recently ruled that over 1000 Palestinians could be expelled and their homes demolished). If you think that is what it means to love the land, Torah teaches us that that is not love but abuse.

But that is nothing new – our entire civilization is based on owning and abusing the land and calling that love. That is why we are still not stopping climate change; that is why we are still carrying out the sixth mass extinction. And that is the opposite of Shmitah, which the Torah indicates is the way to finally overcome the flood, to fix the relationship between humanity and the Earth, and to fulfill the purpose of Sinai.

Shmitah is the Torah we need to survive into the next century. Eit la’asot – it’s time to act! Shmitah is still the mission. This is the work that none of us may desist from until it’s complete. This is the task!

Random gematria tidbits (numerology) about Shmitah: Shmitah שמיטה is equal to Eretz Hachayyim ארץ החיים (“land of the the living”) and to Or Mufla אור מופלא (“wondrous light”). And Tishm’tenah Un’tashta תשמטנה ונטשתה (the phrase describing Shmitah in Exodus 23:11, “you will release and let go”) equals the word Torah plus the “milui” (adding together the word plus the gematria of each letter spelled out: תורה + תיו + ואו + ריש + הי).

You can get a whole Rainbow Day curriculum at jewcology.org.

* Why “other animals”? After all, Jewish thought doesn’t tend to think of human beings as one animal species among all the animals – think about the divine image, pikuach nefesh (the overriding value of human life), etc. Maimonides, however, does think that way. Every place in the Guide for the Perplexed where he mentions human beings and ba’alei chayyim (animals), he always says “the other animals” – as is befitting of someone who has a scientific view of the world. That does not mean he in any way devalued human life. Maimonides is a pretty good precedent to rely on for this.

** In addition to these two liturgical/calendar moments, we also have two other places in Torah where Shmitah is highlighted: in Exodus 23 (Mishpatim), discussed above, and Deuteronomy 15 (Re’eh), which describes shmitat kesafim, the release and cancellation of debts.