Nazis are documented as one of the most horrific, brutal and sadistic genocidal murderers in history. They were insatiable in their lust for Jewish blood, and in their quest to dehumanize all Jews. Humiliating their victims, including children and infants, was sport. Emotional and physical torture of their victims became a practiced fetish. A human mind cannot conceive anything worse than a Nazi, however, is it possible for depravity to provide something even more cruel and sadistic?

Nazis were not alone in their bloodlust, Lithuanians volunteered en masse to murder Jews. Lithuanians led the path by completing a genocide of Lithuanian Jews prior to Germanys official determination to begin the “Final Solution”. Lithuanian Prime Minister Skirpa was one of the first to propose the genocide of Jews to Nazis, and Lithuanians gleefully complied. The 220,000 Jews who were murdered in Lithuania was not a sufficient number to satiate Lithuanian bloodlust, therefore, Lithuanian murderers sought more.

Germans gave Lithuanians permission to go to Belarus to murder Jews in Minsk, Borisov and Slutsk districts. The documented crimes are as follows:

In the autumn of 1941 the Lithuanian 2nd Police Battalion, together with Germans, murdered about 46,000 people in Belarus, including about 9,000 Soviet POWs and 12 Soviet underground members. The overwhelming majority of the victims were Jews. The Lithuanian 2nd Police battalion was widely known for their sadism and brutality. Juozas Krištaponis was in the leadership of this battalion. 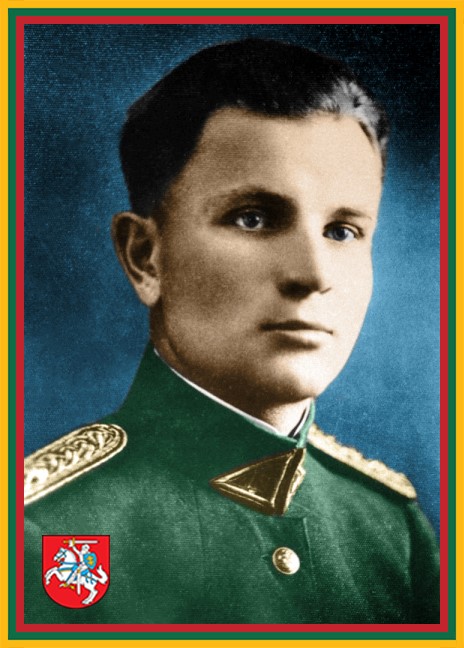 Commissioner General of Belarus Wilhelm Kube wrote in protest to his superior and to Reichsführer-SS Heinrich Himmler: The town was a picture of horror during the action. With indescribable brutality on the part of both the German police officers and particularly the Lithuanian partisans, the Jewish people, but also among them Belarusians, were taken out of their dwellings and herded together. Everywhere in the town shots were to be heard and in different streets the corpses of shot Jews accumulated. The Belarusians were in greatest distress to free themselves from the encirclement. The letter concluded: I am submitting this report in duplicate so that one copy may be forwarded to the Reich Minister. Peace and order cannot be maintained in Belarus with methods of that sort. To bury seriously wounded people alive who worked their way out of their graves again is such a base and filthy act that the incidents as such should be reported to the Fuehrer and Reichsmarshal.

Slutsk district commissar Heinrich Carl was also horrified by these massacres. In his letter of October 30, 1941, to the German general commissar in Minsk he wrote: ‘… On the methods of executing the operation, that, very sorry to say, I must admit, that they were almost equal to sadism. During the operation the very city appeared horrible. The unspeakably brutal German police officers, and especially the Lithuanian partisans, dragged Jews out of their homes, and among them were Belarusians, and packed them into a single location. There were bullets flying everywhere in the city, and on some streets whole heaps of the corpses of shot Jews turned up. … I ask only that my one request be honored: in the future make sure to save me from this police battalion!”

The crimes of Krikstaponis were already well known when Lithuania began honoring him as a national hero. In 1996, the Lithuanian city Ukmerge named a center square to honor Juozas Krikštaponis. 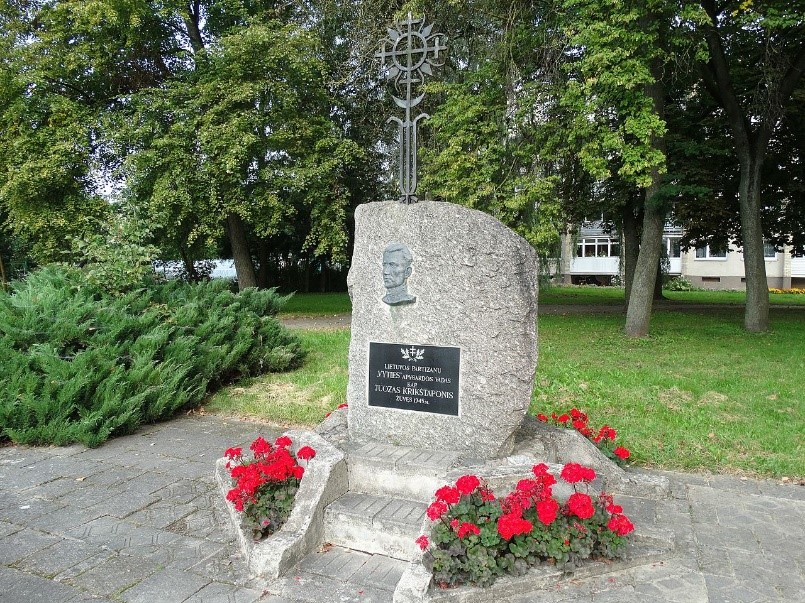 In that same year, a wooden memorial cross was erected on the bunker where Krikštaponis died. In 2006 an obelisk was built next to this cross.

In 1997, the Lithuanian Government granted Krikstaponis legal status as a soldier’s volunteer. On October 31, 2002 the President of Lithuania granted Krikstaponis posthumous national honors. Krikstaponis’s crimes remain well known to the government and are even admitted by them, however the government declines to revoke his honors. Clearly, Jewish victims are of no consequence to Lithuania. To give these victims a personal face, the family of Israeli President Shimon Peres was from this area, it is likely that some of his relatives were murdered by Krikstaponis and his gang. The Lithuanian government tells the international Jewish community that the country regrets their “loss” of Jews, their domestic actions show the opposite sentiment. Are we to accept the Government’s words or their very deliberate and very loud actions?

In past eras, it was standard that Jews would be accused of crimes. For example, the Dreyfus Affair of 1894 and the Beilis trial of 1913 are two of the more prominent of these cases. Those default accusations were halted after the Holocaust, but an inversion of this theory has been developed in Lithuania. The new prevailing theory by the Lithuanian government is that no Lithuanian could have perpetrated a crime against a Jew. Their construct is that Lithuanians who murdered Jews are elevated to hero status, with strict denials regarding their crimes. Krikstaponis is only one such example. So many Lithuanian Holocaust perpetrators have been elevated to hero status, that one wonders if having murdered Jews was a criterion for Lithuanian national honors.

Cases such as Dreyfus and Beilis led to the pervasive anti Semitism that infested Europe, directly leading into the Holocaust. Lithuania now leads the world in claiming that being a Holocaust perpetrator is not a character stain. 75 years since the conclusion of the Shoah in Lithuania, it is inconceivable that any country would still be defending Nazi collaborators, nonetheless, Lithuania is doing it.

On January 15, 2019, the Lithuanian Government will go to court to claim that the Lithuanian Holocaust perpetrator, Jonas Noreika is not responsible for his crimes, and, like Krikstaponis, should remain a national hero. They officially ignore and deny the dozens of documents in their own archives that prove Noreika’s guilt, they deny eyewitness accounts of his crimes and testimony from his own family. This will be the first time that a Government has legally sought to defend a Nazi collaborator.

Currently Lithuanian school teachers earn EU 520 (net) per month; 80% of the youth are considering emigration due to economic distress, ironically, the government is willing to spend tens of thousands of Euros to defend the reputation of a Nazi collaborator. This displays their national priorities.

The inversions of the Dreyfus Affair and the Beilis Trial are now the Lithuanian norm. 124 years after the Dreyfus Affair began, it remains a stain on France. The Noreika Affair will similarly remain a stain on Lithuania for generations, unless there is a dramatic change before the trial. Jews are no longer impacted by Lithuania, this time the damage inures to Lithuanian national dignity and identity. Already 1 out of every 3 high school students says he/she wishes to leave Lithuania forever. 80%+ say they have “been thinking about emigrating”. Lithuania accounts for less than 1% of the EU population, certainly no rational business person will invest in a state with such right leanings towards Nazi collaboration. Their failure to denounce their enthusiastic participation of the past makes them an uncertain partner for the future.