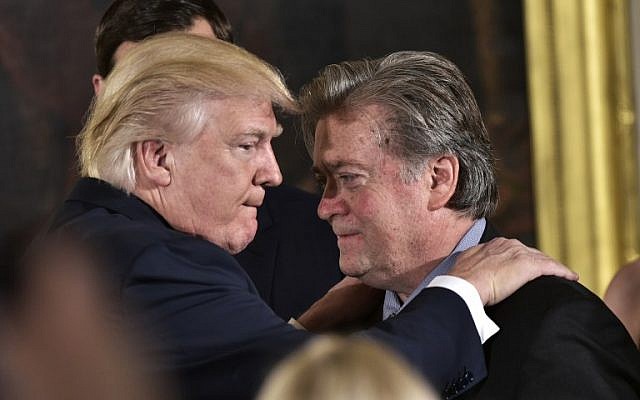 US President Donald Trump, left, congratulates then senior counselor to the president Stephen Bannon during the swearing-in of senior staff in the East Room of the White House on January 22, 2017 in Washington, DC. (AFP/Mandel Ngan)

Question: What do the Republican Party in the Age of Trump and the Communist Party in the Era of Stalin have in common? Answer: A commitment to ideology over information.

For more than three decades, Soviet agronomy was in thrall to “Lysenkoism” which denied genetics and rejected natural selection. It was named after Trofim Lysenko, a charlatan whose half-baked theories about breeding posited that weeds could be transformed into grain — the alchemist’s equivalent of turning lead into gold. These claims so captivated Stalin that they long prevailed despite their demonstrable failure and dismissal by reputable researchers. For their pains, thousands of Soviet biologists were imprisoned or executed. What was important for the Communists was not verifying but justifying: adapting science to the Party Line. Research was to be retrofitted to ideology making Soviet agronomy a laughingstock and the term “Lysenkoism” forever associated with fraud. It was something that, until recently, was associated with the blinkered rule of Soviet despotism. No longer.

We now have in America’s ruling party and its President a US version of “Lysenkoism.” Nor is it limited to one area but rather, it has absorbed a widening body of government within its grasp.

Scott Pruitt, the President’s choice to head the Environmental Protection Agency, said this past week that carbon dioxide was not a primary contributor to global warming. His assertion came in the face of a vast body of research from international scientific bodies and our own science agencies demonstrating that more than half the world’s warming since 1950 has been man-made, caused by heat-trapping carbon dioxide and other greenhouse gases. Pruitt offered no evidence but simply attested to what he said as an article of faith, ignoring the overwhelming evidence provided by NASA and the National Oceanic and Atmospheric Administration. By way of a response, Trump’s proposed budget calls for slashes in NOAA’s funding that threatens its climate research.

In health care, Trump and his allies in Congress are pressing for a rushed and ill-considered replacement of the Affordable Care Act despite opposition from the American Medical Association which warned that the legislation would result in millions of Americans losing coverage, the American Hospital Association which feared that Trumpcare would lead to tremendous instability, and the American Nurse’s Association which warned that the GOP initiative would threaten health care affordability, access and delivery. But the Republican leadership forged ahead, indifferent to any advice by policy experts, concerned only about the promises to its base rather than the consequences of its actions. When critics demanded that the GOP consider an assessment of the costs and effects of its legislation by the nonpartisan Congressional Budget Office, the response of Trump’s press secretary was to question the reliability of the CBO.

This cavalier attitude toward expertise carries through to the entire Trump administration. Trump and his acolytes have questioned the accuracy and effectiveness of US intelligence agencies; he shows little appetite or need for daily security briefings, he has diminished the services of the Council of Economic Advisors, he has shown little interest in the advice of foreign policy experts, and displayed open disdain for the input of academic specialists. His counsel comes from a camarilla of like-minded confidants and family members. His attitude toward seasoned government professionals is one of wariness that they may tell him things he doesn’t want to hear. So best to keep them at bay or, better still, why keep them at all?

This dovetails with the goal of his chief strategist and alter-ego Stephen Bannon to diminish “the administrative state.” Bannon has done little to disguise his disdain for government agencies. He has dismissed them as havens for obdurate bureaucrats unresponsive to the popular will. In so doing he has vilified a civil service of dedicated professionals who have devoted their lives to a smooth and efficient operation of Federal administration. But Bannon’s denigration serves a larger purpose. Pruning government means fewer people minding the store, fewer watchdog agencies protecting the public, and fewer independent eyes, ears and voices inside the Government; in effect less accountability for those at the top. A pared-down and put-down bureaucracy can be trained to be lapdogs instead of watch dogs. If Trump and his cabal get rid of meddling specialists they only have to listen to themselves. Then, it will be the political commissar who dictates reality demoting the expert to the status of apparatchik.

Trump’s campaign by innuendo is now evolving into rule by assertion, unmediated by reality. He can twitter whatever he feels like. Did he win the popular vote? Absolutely. The biggest inauguration crowd ever? Sure. Was he wiretapped by President Obama? Certainly. Curbing the independence of Government agencies — by attrition, infiltration and intimidation — is a critical step in the Bannon-Trump program of consolidating power by dispensing with information that is ideologically unsuitable.

If Trump can blur the line between truth and fact by disparaging, coercing or co-opting experts, then whatever he says passes for truth. And there is no one to say him nay.

The US has been the leader in world science because of its reputation for critical examination of facts based on objective reality. Trump’s rejection of this institution, and the precepts that underlie it, bode ill not only for the case of science but for the defense of truth and, worse still, for the cause of democracy.