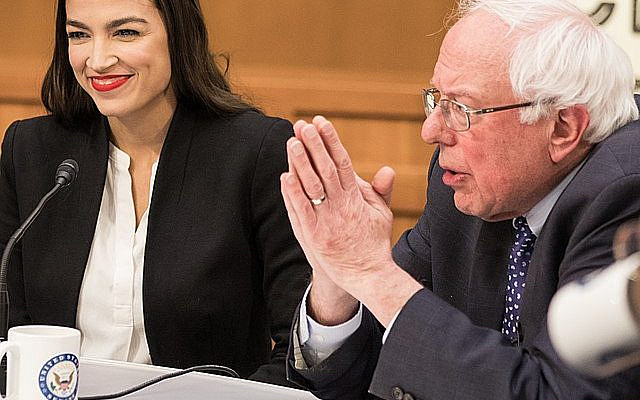 Led by Alexandria Ocasio-Cortez (D-NY), in the House, and Bernie Sanders (D-VT), in the Senate, progressives in the United States are moving to block a $375 million precision-guided munitions—Joint Direct Attack Munitions (JDAMs)— sale to Jerusalem. The Washington Post broke the story that Congress had been notified of the sale, on May 5. The deadline for the pols to slash the sale, as a sanction, is up May 20. Democratic Representatives, Mark Pocan (D-WI) and Rashida Tlaib (D-MI) joined AOC in introducing the joint resolution. Should this bloc, made up mostly of Democratic Socialists, have success in their joint resolution, it would be unprecedented. “Congress has never successfully blocked a proposed arms sale via a joint resolution of disapproval, according to the Congressional Research Service,” wrote John Haltiwanger in Business Insider.

AOC wrote that Washington, or Wall Street, would be selling JDAMS to Jerusalem “without ever requiring them to respect basic Palestinian rights.” She says it would cause the United States to enable Israel in “the death, displacement and disenfranchisement of millions.” But her accusation of Israeli schadenfreude towards the 64 dead Palestinian children is a sick travesty. “At a time when so many, including President Biden, support a ceasefire, we should not be sending ‘direct attack’ weaponry to Prime Minister Netanyahu to prolong this violence…” concluded the youngest-ever member of Congress, who randomly claims she has Sephardic ancestry. “The United States should not be rubber-stamping weapons sales to the Israeli government as they deploy our resources to target international media outlets, schools, hospitals, humanitarian missions and civilian sites for bombing…” she Tweeted, completely overlooking the fact that Hamas clearly utilizes vulnerable civilians, as shields.

Israel’s bombardment of the Gaza Strip has dominated global headlines. And it has drowned-out the massive elephant in the room: the Islamic Republic of Iran, which is the Izz ad-Din al–Qassam Brigades’ chief benefactor. Instead, the same voices who introduced a bill to ditch the sale of JDAMS to Jerusalem, are the same antagonists who are influencing the Biden administration to reenter the JCPOA (Joint Comprehensive Plan of Action), with Tehran, thereby sending hundreds of millions of dollars in liquid assets to the Ayatollah’s regime, which will inevitably be spent on Shiite proxy militias, and Palestinian terrorist organizations, which endanger their own civilians by attacking the Jewish state, and even firing rockets, aimed at Israel, that don’t make it past the Palestinian territory, and kill their own.

Most of the funding for the al-Qassam Brigades and Palestinian Islamic Jihad, comes from Iran. And said funding would only increase multifold were the United States and other European nations to reenter into an accord and unfreeze assets to Tehran. December 23, 2021, 150 House Democrats sent a letter to then-President-elect Joe Biden communicating support for diplomacy with Iran: “We are united in our support for swiftly taking the necessary diplomatic steps to restore constraints on Iran’s nuclear program and return both Iran and the United States to compliance with the Joint Comprehensive Plan of Action (JCPOA) as a starting point for further negotiations…” Representatives David Price (D-NC), Barbara Lee (D-CA), Jan Schakowsky (D-IL), Gregory Meeks (D-NY), Joaquin Castro (D-TX), Abigail D. Spanberger (D-VA), and Brad Sherman (D-CA) drafted the missive.

But the American political players who—albeit underhandedly—strive to handcuff the Jewish state and empower Hamas and, subsequently, the al-Qassam Brigades, (and the Quds arm of the Islamic Revolutionary Guard Corps) don’t just stop with the Representatives of Congress, or the Brooklyn-born, Jewish, elderly Democratic Socialist Senator from Vermont. According to John Bolton, 25th United States Ambassador to the United Nations, employed by former-President George W. Bush, and 27th United States National Security Advisor—foolishly fired by ex-President Donald J. Trump—Biden’s Climate Czar, John Kerry, longtime chum of Iranian Foreign Minister, Mohammed Javad Zarif, spilled to the Quds Force (the IRGC’s hawkish military wing which oversees Palestine) contrarian, classified information about Israeli strikes on Iranian military targets, inside Syria. “Democrats have rallied around Kerry, while the press has all but ignored or dismissed the controversy,” wrote Marc Thiessen in the Washington Post. This makes it clear why congressional progressives side with the Palestinians, who are represented by Hamas—and create a division within the Democratic Party. If John Kerry had his way, and Vermont Senator Bernie Sanders, and of course, ‘the Squad’, Israel would be forced to give up more land, and not respond to terrorism and attacks from al-Qassam, and finally, would be sanctioned. What’s more: Iran would have nuclear weapons.

As for the JCPOA, and why it is not worth salvaging, in an op-ed to the Washington Post, John Bolton wrote, “In Iran, it is not the negotiators who matter, nor what they say. It’s increasingly the IRGC, [Islamic Revolutionary Guard Corps] which controls the nuclear-weapons and ballistic-missile programs, commands conventional military activities externally, and supports terrorists worldwide.”