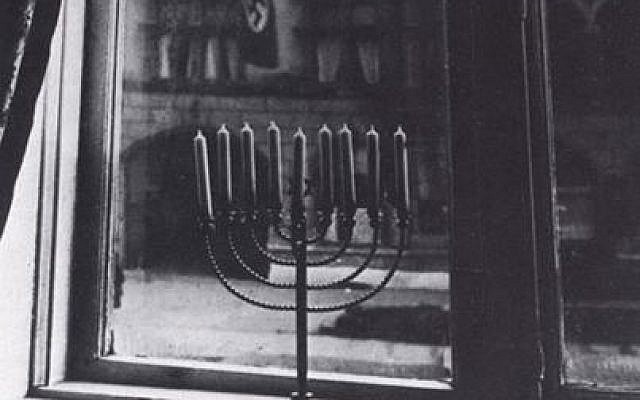 Taken by Rachel Posner, wife of Rabbi Akiva Posner, in Kiel, Germany. On the back is written, "Chanukah 5692 (1932) 'Death to Judah.' So the flag says. 'Judah will live forever.' So the light answers." (Source: Yad Vashem)

As Chanukah reminds us, Jews are no strangers to persecution. We have been fighting for our right to exist since the beginning of our recorded history. As we say at Passover: “In every generation, there are those who wish to destroy us.” A list of those who’ve tried would be long: Pharaoh, Amalek, Nebuchadnezzar, Haman, Antiochus, Caesar, Torquemada, to name only some.[1]

In fact, such persecution is so common in our history that there’s an old joke about Jewish holidays: “They tried to kill us; they failed; let’s eat!”[2]

Is the Holocaust just another of these stories? Should we add Hitler to that list?

Was the Holocaust different?

When we tell stories of persecution on religious holidays, we naturally focus on the enemy’s attempt to prevent us from being Jewish or to kill Jewish people. In truth, however, most of these stories are really about control. Some of them, like the Babylonian destruction of the Temple in Jerusalem, are about control of territory.

Most are about control of people, however. When a minority group insists on remaining different, on not assimilating, they become harder to control. They have different rules, different ways of doing things, different ways of thinking. Chanukah, Passover, and Purim are all about rulers trying to control a minority population (us), through rules to control our behavior, and us rejecting the idea. In one sense, the Inquisition could also be viewed as a fiery method to better control the population.

What about the Holocaust? Was this just another attempt at controlling territory or population?

In a certain sense, the Holocaust was a desire for territorial control taken to the extreme. The Nazis saw the existence of Jews in the world as a threat to the expansion of the Aryan race. Trying to understand why is difficult and beyond the scope of this blog.

Because the very existence of Jews in the world threatened them, the Nazis’ goal was much more far-reaching than the goals of previous persecutions. Initially, their goal was to drive the Jews out of Germany. Over time, that goal changed to global extermination and elimination not only of the Jewish people but also of the entire Jewish culture. They wanted to make the whole world JudenFrei, free of Jews, as if Jews had never existed. We had not seen such a far-reaching goal before, and I do not believe we have seen one since.

As far-reaching as that goal was, however, it was ultimately unsuccessful. And therefore, I think we could add Hitler to that list. The Nazis tried to kill us, but they failed. And we should commemorate that with food.

Although we have the Allies to thank for our final rescue, the Nazis’ failure to crush us had as much to do with our own strength as the Allied liberation. “If we cannot live on what is permitted, we live on what is forbidden,” said Chaim Kaplan in the Warsaw Ghetto. This comes from a secret power, he said, and “the strength of this power is rooted in our eternal tradition that commands us to live.”[3]

Our holidays, Chanukah included, celebrate that strength. Chanukah celebrates the strength of the resistance. It honors our willingness to stand up for our right to be who we want to be. All of the “they tried to kill us” holidays are primarily aimed at acclaiming our strength in choosing life, freedom, and Judaism.

Chanukah is a beautiful model for us in how to remember the Holocaust. Chanukah is the festival of light and comes at the darkest time of the year. At Chanukah, we light candles to keep away the darkness. We remember the strength of our people to fight the darkness of religious persecution and to fight for our right to be Jews.[4]

The Jews in the Holocaust found lighting candles at Chanukah to be a particularly moving ritual. It reminded them of home and family and happier times. More than that, however, “Chanukah is the festival in which day begins to overcome night,” Emmanuel Ringelblum noted in his journal in the Warsaw Ghetto.[5] Chanukah, Purim, and Passover allowed the Jews in the Holocaust to dream of the miracle of freedom, of day overcoming night, and of good overcoming evil.

Chanukah reminds us that we can and must stand up for ourselves and others when freedom is being trampled. I have no doubt that this lesson gave strength to the Jews in the Holocaust who stood up and fought what they knew would be losing battles, if only to strike a blow for freedom and justice.

How we commemorate the Holocaust

The stories of our holidays, of Chanukah and Passover and Purim, teach us that we must not dwell only on the terrible things that happened to us. We must celebrate our strength because that is who we are. We are people who stand up to persecution and refuse to be broken.

We are people who fight for freedom and justice, for ourselves and for others, even in the face of overwhelming odds. Sometimes we succeed, as we did at Chanukah. Sometimes, we don’t. But we do not let our defeats cloud our willingness to continue to stand up.

When we commemorate the Holocaust, we must acknowledge both the darkness and the light. We must tell the story not only of the terrible tragedy but also of how we stood strong, fought back where we could, and remained Jewish, even in the face of overwhelming odds. We must appreciate how we emerged strengthened in our resolve to remain Jews, to continue to be a people who stands up for our rights and the rights of all people.

For a method of commemorating the Holocaust that tells of both the darkness and the light, see https://www.teachtheshoah.org/ritual.

[1] Pharoah: the Exodus; Amalek: in the desert, from Exodus; Nebuchadnezzar: the Babylonian exile; Haman: the story of Esther; Antiochus: the story of Chanukah; Caesar: the Roman destruction of the Temple; Torquemada: the Spanish Inquisition.

[2] Amusingly, only few of the many Jewish holidays actually fit that trope: Chanukah, Purim, and Passover. And, potentially, Yom HaShoah. For an example of a Yom HaShoah service, see https://www.teachtheshoah.org/ritual.

[4] It is important to recognize that the Maccabees, who became the Hasmonean dynasty, did not believe in religious freedom for anyone other than themselves. Nonetheless, we celebrate their passion for their own religious freedom and extrapolate to what we would have done with that freedom.

[5] From The Journal of Emmanuel RingelBlum, Yad Vashem publications.